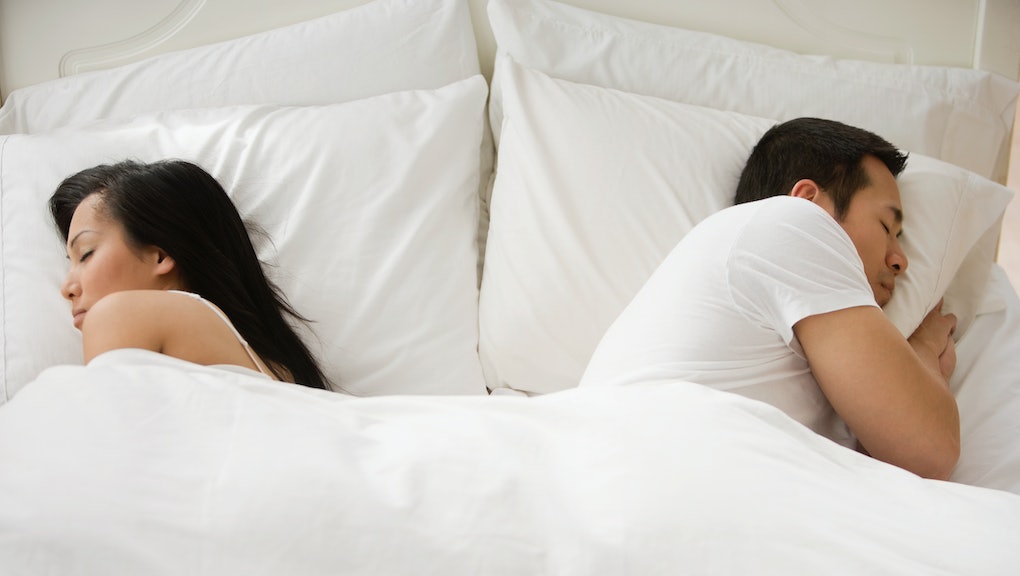 Can Taking a 90-Day "Sex Fast" Really Help Your Relationship?

When a marriage lasts for years, it's natural for some couples to find that their sex life has withered like a lonely lil' IKEA plant that hasn't been getting enough sun. While some experts might say this is the time to bust out the lube and get freaky in the boudoir, World's Funniest host/Old Spice spokesman Terry Crews has a different message entirely: Stop having sex altogether.

In an interview with the Huffington Post, the actor and former football player shared that in an attempt to reconnect with his wife, he went on a "sex fast" for not 30, not 60, but 90 days (an astonishing 50 more days than that of divisively hot heartthrob Josh Hartnett in the 2002 film 40 Days and 40 Nights).

"Ninety days — no sex, all relationship, all talk, all cuddle," Crews said of the self-inflicted bed death he and his wife endured. "I found that at the end of that 90 days ... I knew who she was, and it wasn't about 'Let's go out because I know I'm gonna get some sex later.' It was like, 'Let's go because I want to talk to you. I want to know you.'"

Elsewhere in the interview, Crews said there was a distinction between intimacy and just plain sex, saying that when people jump into relationships, what they want deep down isn't sex, but rather "someone to know you and love you at the same time."

Crews' "sex fast" has raised more than a few eyebrows, but it also raises an interesting question: Is eliminating sex from the equation truly the best way to strengthen your relationship? While few would argue against the idea that intimacy is essential in serious relationships, isn't sex pretty crucial as well?

According to marriage research, Crews' self-imposed 90-day abstinence period might be a bit misguided. In a report published in The Journals of Gerontology: Series B last year, for instance, researchers concluded "sexual activity mediates the association between own and partner's physical health and positive marital quality" and "to protect marital quality in later life, it may be important for older adults to find ways to stay engaged in sexual activity, even as health problems render familiar forms of sexual interaction difficult or impossible." In short, an active sex life is integral to a happy and fulfilled marriage.

Melissa Cohen, LCSW, couples therapist and creator of The Relationship Roadmap, told Mic that many of her clients sometimes do benefit from pumping the breaks on full-blown intercourse for a bit — but it doesn't mean they should cease all intimate contact.

"For many of the couples that I treat, there is a great deal of pressure surrounding sex because they don't feel the intimacy that sex is supposed to be rooted in," she said. "Sometimes, intercourse needs to be taken off the table to break down the paradigm that intercourse is the only form of touching that is valued."

Crews and his wife aren't the first people to take a "sex fast." A number of people have gone on record saying that purposely abstaining from sex for long periods of time is essential in order to recharge their batteries and reignite the spark. Some tantric sex practitioners, for instance, claim that retaining semen for prolonged periods of time can eventually lead to an increased sex drive (the result of increased testosterone), longer stamina and even multiple orgasms.

Indeed, Crews did tell Huffington Post that after his 90-day sentence came to a close, he felt "more turned on than ever," so perhaps it was what he and his wife needed to put the spring back in their steps. But some couples might find that depriving themselves of one of the most pleasurable perks of being in a relationship in the first place for a straight-up quarter of a year is taking the concept a bit too far.

At the end of the day, every marriage has its own quirks, and every couple's sex drive has its own ebbs and flows. The answer to whether a sex fast is right for you comes down to one simple adage: different strokes (or in this case, a lack thereof) for different folks.