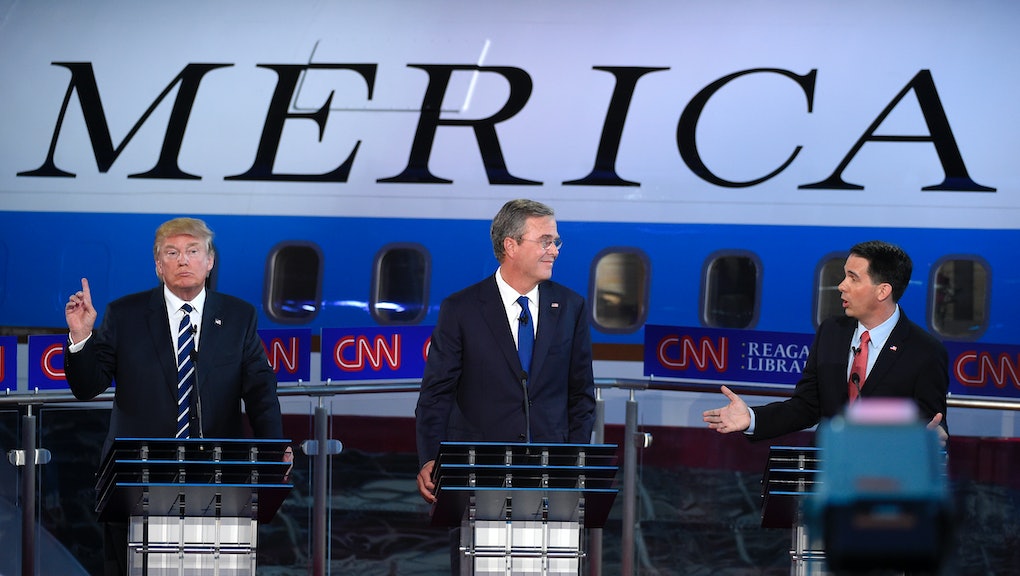 2015 CNBC Republican Debate: Where the Candidates Stand on Immigration

The Republican candidates still in the running for the 2016 presidential election will convene Wednesday at the University of Colorado in Boulder for the third of 11 primary debates. CNBC will host the debate, which is scheduled to begin at 8 p.m. ET.

The main topic will be the economy, with questions centering on job creation, tax policy and growth. Additionally, debate moderators will likely challenge candidates to discuss their positions on undocumented workers, border control and immigration reform, the Denver Post reported.

Here's where the top 2016 Republican candidates stand on the issue of immigration, a topic that has divided the GOP:

Trump: Trump has been vocal about increasing border controls between the United States and Mexico. At the core of Trump's plan is building a wall along the border, an endeavor he'd like Mexico to pay for.

According to Trump's official position on immigration and his proposed wall, "The cost of building a permanent border wall pales mightily in comparison to what American taxpayers spend every single year on dealing with the fallout of illegal immigration on their communities, schools and unemployment offices."

If Mexico refuses, Trump's plan outlines a strategy to increase the cost of temporary visas, border crossing cards and NAFTA worker visas from Mexican citizens, and boost all border fees for goods exported to the U.S. from Mexico.

Carson: Carson and Trump are on the same page when it comes to immigration. In an appearance on CBS' Face the Nation, Carson laid out his timeline to boost border controls.

"Let's say we get [borders] sealed, because certainly in a Carson administration that would be done within the first year," Carson said. "You also turn off the spigot that dispenses the goodies, so that people don't have any incentive to come here. Then those who are here, we have to recognize that we can't just round them up, but we can give them an opportunity to register.

"I would give [illegal immigrants] a six-month period. If they register, and if they have a pristine record, they haven't been causing problems, I would give them an opportunity to become guest workers — not citizens, not voting people, not people who get goodies."

Rubio: Raised in an immigrant family, Rubio wants to "modernize" immigration. Speaking at the Republican presidential debate September, Rubio made clear that, for him, the issue is personal.

"Here's the way forward: First, we must secure our border, the physical border, with a wall, absolutely. But we also need to have an entry/exit tracking system. Forty percent of the people who come here illegally come legally, and then they overstay the visa. We also need a mandatory e-verify system."

Bush: Bush isn't afraid to sway from popular GOP opinion on immigration reform. Bush's wife is Mexican, and together they have raised a bicultural family.

"If we embrace a set of shared values, then it shouldn't matter if you have a 'z' at the end of your name, or your accent might be different," Bush said speaking to a mostly Hispanic crowd in September, according to CNN. "There are people in this country that have accents different from mine and mine's different from theirs. It doesn't matter."

Bush supports a platform of earned citizenship for those who arrived in the United States as children and remained illegally — an effort the Dream Act, a legislative proposal which stand for Development, Relief, and Education for Alien Minors, seeks to address. Bush would also allow undocumented workers to earn legal status if they learn English and pay back taxes plus a onetime fine.

Fiorina: Like Bush, the former HP chief supports the Dream Act in some form, and has also openly criticized Trump's approach to immigration reform.

"I've been very clear I don't support deportation," Fiorina told NBC News in August. "I don't support amending the Constitution or challenging the 14th Amendment." In reference to Trump's wall-building scheme, Fiorina said, "I think these are ideas that stoke anger but don't solve problems. ... And I think others, now, are sadly pandering to him."

Instead, Fiorina would call on the federal government to increasing border control and has advocated for the creation of an employer-verification system to weed out undocumented workers. However, Fiorina would most likely protect the children of those workers.

"Perhaps their children can earn citizenship because I don't think we should punish children for the sins of their fathers and mothers," she told NBC News. "I don't."