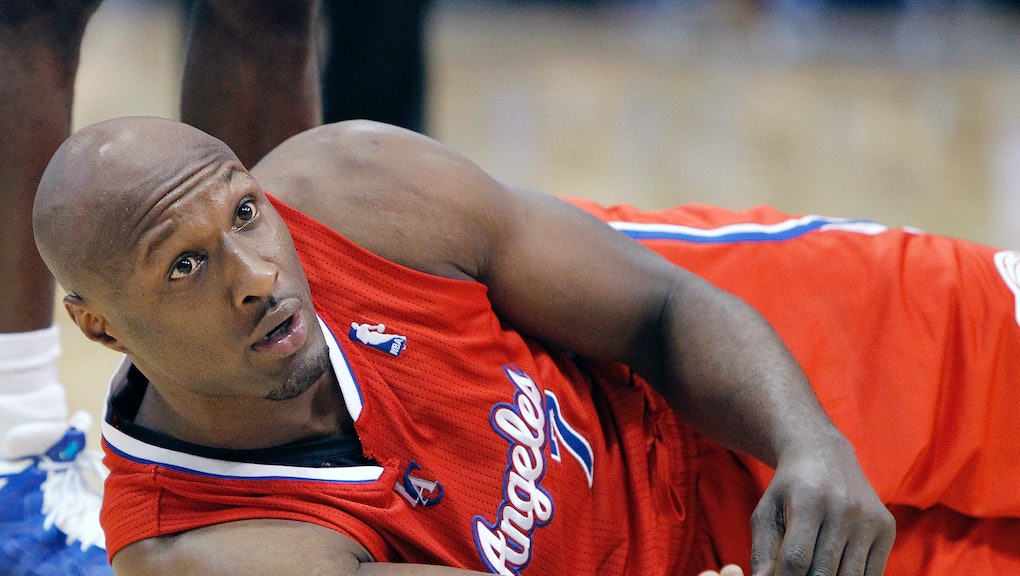 In the wake of Lamar Odom's hospitalization after being found unconscious in a brothel in Nevada, media coverage has been nonstop. The complicated circumstances surrounding the incident — including his and wife Khloé Kardashian's impending divorce — did little to stem speculation. As the brothel's owner made the rounds and Kardashian announced the divorce was off for now, scrutiny only intensified.

Bloggers and writers like Perez Hilton have tracked every development with laser precision. Such attention to the incident may seem crass to outsiders, but it's pretty much par for the course with a case like this. What has been beyond the expected, however, has been the often incorrect and blame-throwing coverage in the print tabloids.

Take the Nov. 2 issue of In Touch Weekly, for instance. The cover blares that Odom was "destroyed by the Kardashians." The subhead reads, "How they humiliated him for TV ratings and drove him to overdose."

The coverage inside the issue isn't better. Quotes about how "his personal demons were still used as fodder" for the show are attributed to anonymous insiders. Attributed quotes go to cousins and old friends.

"They'll do anything for publicity," one friend, Alan Barcoff, told In Touch Weekly. "They don't care who they hurt, who they use." He then insinuated the family was only standing by Odom because of the publicity opportunities.

The quote from the cover comes from Jennifer Richardson, a woman In Touch refers to as Odom's "former mistress," in an interview with the magazine. "The Kardashians destroyed Lamar," Richardson said. "They treated him like hell and it almost killed him."

Odom is reportedly recovering steadily now. That didn't stop magazines like Ok! from running covers sensationalizing his "deathbed confession" to his wife, however.

Perhaps most egregious, however, is Star. The tabloid ran a cover last week promising the story of the Kardashians ruining not just Odom, but all of "their men." The cover copy reads "black widows," with Khloé, Kourtney and Kim Kardashian, along with mom Kris Jenner, clad in black.

Odom, the cover says, "attempted suicide." Scott Disick, Kourtney's ex-boyfriend, "does drugs for breakfast." Kanye West, Kim's husband, has a "career in tatters." Meanwhile, Caitlyn Jenner, a trans woman who came out as such this summer, is labeled as one of the Kardashians' "men" and purportedly underwent "23 years of mental torture."

"Lamar Odom's tragic downfall wasn't the first drama-filled scene for the Kardashian brood," the magazine's website reads describing the cover. "Each of them — Kris, Kim, Kourtney and even moreso, Khloé — must be feeling a Kardashian Kurse is on the family name when it comes to relationships."

The problems with stories like these are myriad. Instead of laying responsibility for Odom's problems on him or his own choices, these tabloids blame the women he associated with. They're at fault. Odom was a victim. "Look at this wrongheaded, woman-blaming, transphobic cover story and see for yourself," they're saying. "Read the quotes from his mistress and see."

Instead of laying responsibility for Odom's problems on him or his own choices, these tabloids blame the women he associated with.

A story like Odom's is going to be covered, often not with the most grace. That's a fact of life. There's an inelegance that comes as part of the package with celebrity reporting. To call women "black widows" and promise "deathbed confessions" that don't exist, though, is beyond inelegance. It's morally and ethically reprehensible.

The editors of these tabloids should know better. Unfortunately, they probably already do.