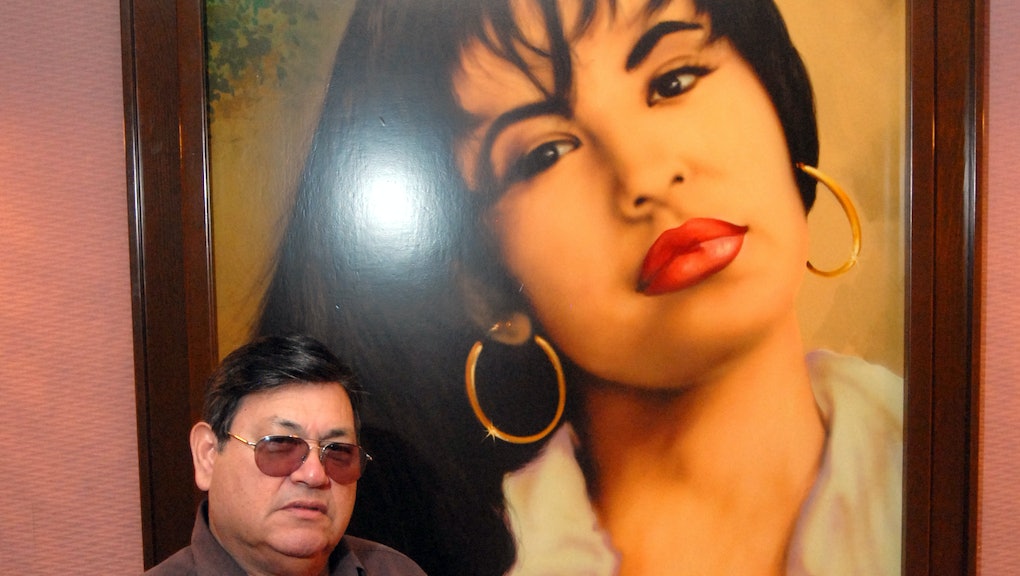 Why Do Latinos Still Love Selena More Than 20 Years After Her Death?

Once Yeiry Guevara moved out of her Texas home, her mother moved the huge poster of the late pop star Selena from Guevara's childhood bedroom right next to the Virgin of Guadalupe, completing the family's altar. Selena worship is a family affair.

"It's funny because my cousins who have kids, they're teaching them to love Selena," Guevara told Mic.

The late Selena Quintanilla-Pérez, the Tejano music and fashion superstar who would sport bras as tops and dance the "washing machine" like her mother taught her, holds a palpable, electric power among Texan Latinos — and anyone who spends enough time watching her practice her craft. March 31, 2016, marks 21 years since her death, but she seems more alive than ever if you ask her fans.

Guevara said she took to Selena growing up because she finally saw someone on the television who looked like her. Selena's appeal, to Guevara, is both particular and universal.

That just may be the X-factor that people colloquially call "it."

But what is "it"? "It" seems to elude definition, but Joseph Roach, professor of English at Yale University and author of the book It, a tome dedicated to those who hold this much-lauded yet ill-defined magnetic pull can put the term in context.

"'It' is a charismatic attraction possessed by abnormally interesting people," Roach told Mic.

Roach explained it like a gestalt switch, one of those pictures where a beautiful lady is also an old woman, or a witch is also a vase, or a duck and a rabbit share the same body:

Like our favorite stars, we want to hold those contradictions without confrontation.

"We ordinary mortals are caught in our contradictions, and we look confused, disorganized in some way," Roach said. "Those with 'it' can hold it together at the same time and make it magical."

To her fans, Selena held together heartbeats of two nations, Mexico and the United States, and synced them onto the same syncopated beat. You know the one: bidi bidi bom bom.

She was Mexican and American. "Bidi Bidi Bom Bom" may be one of her signature songs, but it's well-known that Selena did not speak Spanish well. To Selena's fans, that fact is a distinction, not a fumble.

"That's the whole thing about being Chicana," Heather Armijo, a Chicana and lifelong Selena fan, told Mic. "You're not white enough but you're not Mexican enough. It's this whole in-between that creates a feeling that you're not good enough, and Selena was good enough." Armijo listened to Selena while driving around Texas in her grandfather's truck. She's contemplating getting a tattoo of the singer on her breasts.

"Her whole story, with her family and like, you know, how they kind of made it from nowhere. It's like an American dream, Chicano style," Armijo said. Guevara was similarly in awe of Selena's ability to put a small town from Texas — "Nothing came out of Corpus Christi!" — on the map.

Corpus Christi, Selena's hometown, is now the home of the Selena Museum, which opened in 1998. When Roger Gomez visited the museum for the first time, he told Mic, it was like Disneyland without rides.

"To be that close to something Selena touched or was in, it was magical, for sure," Gomez said.

Gomez runs Love Selena, a website dedicated to the late singer. The Facebook page has more than 26,000 likes, and around 3,000 people follow Love Selena's Twitter. Gomez also started an annual Selena fan gathering in Los Angeles. Gomez said when he began the gathering last year, it attracted around 100 fans; this year, more than 1,000 came, including her widower Chris Perez.

"He made me feel like I could talk to him about anything, really," Gomez said. "I wasn't starstruck. It was a weird feeling, but the way you and I are talking now," he told Mic, "that's the way it felt."

The way Selena makes her fans feel was reflected in the words they chose to describe her with. The most common words her fans told Mic? "Sincere," "effervescent," "compassionate" and "humble."

Indeed, Selena is not only a cultural icon but also a kind of aggrandizing mirror: In her, each fan sees the best parts of themselves reflected.

Edgar Diaz, a Chicago-born Mexican, discovered Selena's music when he moved to New Haven, Connecticut, in 2005 to attend Yale University. Selena's music let him keep in touch with his Mexican roots back in Chicago while away from home, Diaz told Mic. He was also discovering his identity as a gay man, and said Selena became a diva icon for him. Diaz has gone down Selena rabbit holes more than once — he watches YouTube concerts, interviews and videos from her funeral.

But they also share another special bond. "I know more than most people," Diaz told Mic, "just given the fact that we have the shared religious background." Diaz and Quintanilla were both Jehovah's Witnesses.

Diaz said he loves to watch the 1997 film Selena starring Jennifer Lopez and said he recognizes religious iconography others may not. "When she's talking to her husband about having a farm with chickens and having kids — that sort of like, 'Let's have a farm later,' — that's what Jehovah's Witnesses see the afterlife as," Diaz said. "That's what I was taught the afterlife was going to be, and that's what she's talking about in the movie!"

Regardless of religion, though, many Latinos during Selena's reign as Tejano Queen latched onto her ascending star as a hope for all Latinos.

"I think she's the pinnacle of Latinidad, like the first generation of somebody who is Latino background but grew up in the States," Miguel Andrade, a Selena fan, told Mic. "She brought the idea of being Latino into the mainstream and made it cool and fashionable and sexy. She built up the idea of what it means to be a Latino in the U.S."

Roach author of It, backed up Andrade's comment, saying the star's cultural following attached a lot of hope to Selena.

"It's poignant because someone like that makes it cool to be who you are," Roach said.

Twenty years after her death, that coolness is now up for grabs — and Selena fans have mixed reactions. Now that the '90s are back en vogue, and millennials have the spending power to bring their nostalgia mainstream, those who loved Selena the first time around are protective of their idol.

"I'm glad she's getting attention, but [Latinos] have been here a long time," Guevara said. Guevara called Selena's resurgence among the general public — MAC's debut of an exclusive makeup line, BuzzFeed taking trips to her Corpus Christi museum — a "commodification of Latina figures."

Before Hillary Clinton took the stage at her first campaign event in Texas since announcing her presidential candidacy, the crowd waited while the music of Selena played over the loud speaker. There former San Antonio Mayor Julián Castro endorsed Clinton. Had it been possible in 2015, she may have preferred Selena's endorsement even more.

Life after death: Gomez said he doesn't take much issue with Selena's second life: To him, her impact has never ended. "It isn't just Latinos," Gomez said. "I think people love Selena and are attracted to her because her story hasn't finished. Although her life was cut short, her dreams are still evolving."

Selena's death is something her fans who spoke to Mic seem to ignore. Her murderer, Yolanda Saldivar, even less so.

"[Saldivar] doesn't cross my mind," Gomez said. "My focus is on Selena's life, her goals, her achievements, who she was — not her death."

According to Roach, Selena's death is probably a part of her lasting impact as well.

"The idea of the interrupted life — that icon is not subject to the vicissitudes of age and decline," Roach said. "They are ageless, and they live in memory as ageless and that's a powerful attraction. The rest of us go about [our] lives day to day and get older."

Guevara thought about this when she turned 23, the same age Selena was when she died. "I was like, 'Damn, I outlived my idol. What do I do now?'" she said.

For Armijo, seeing her death on screen makes her so emotional she begins to speak in Spanish. "The ending was so impactante [shocking], seeing her death and stuff like that," she said. But what really gets her is the family aspect of Selena's story, beyond the film. "It impacted Chicanos trying to combat racism in our own communities, and the Quintanilla families are still trying to seguira adelante [move forward]."

And those Latinos who saw themselves in Selena have begun that march forward. In a scene in the film Selena, Selena's father talks to her and her brother about the exhausting nature of being Mexican-American: How Mexican-Americans are neither Mexican enough or American enough, how they belong to neither country, how they are rejected by both.

Selena, though, juggled the contradiction of Mexican-American identity effortlessly. When fans look at her, they see both Latino culture and American culture. She's a daughter of Mexico and the United States, with a firm foothold in the dirt of two homelands. While others may struggle to balance that footing, Selena could do it. She had "it."

As Mic hung up the phone with Guevara, and thanked her for her time, she said, "Anything for Selenas!"