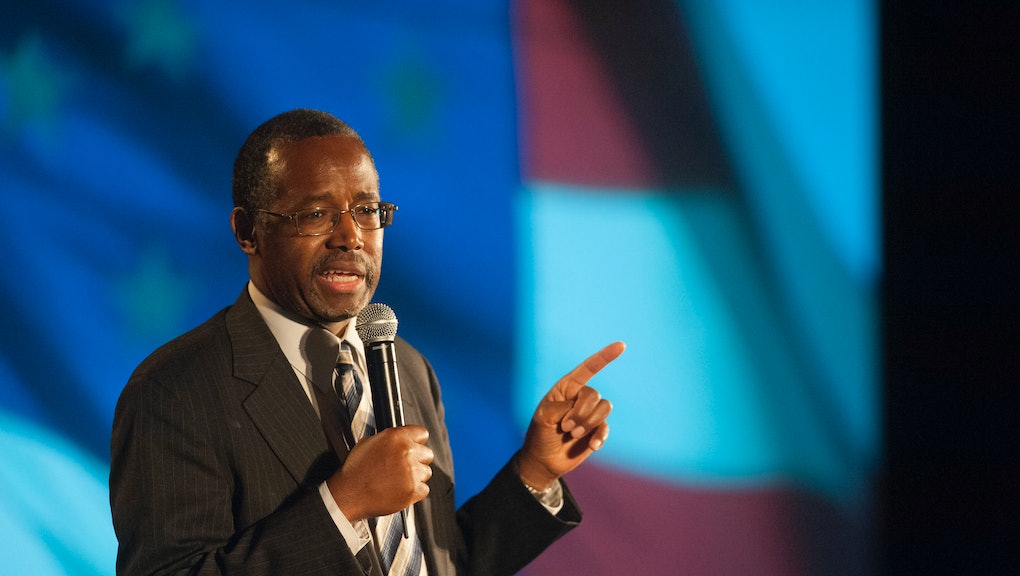 Ben Carson Brings Up Neurosurgery, Time He Tried to Kill Someone, in Response to Trump

Ben Carson wants Republicans concerned about his laid-back demeanor to know he once was a dangerous dude.

During Sunday's Meet the Press interview with Chuck Todd, Carson responded to front-runner Donald Trump's recent comments that the neurosurgeon lacked the energy to be president.

"I'm not sure that there's anybody else running who's spent 18 or 20 hours intently operating on somebody ... I have plenty of energy," Carson told Todd, before referring to his troubled upbringing. "But, you know, I am soft-spoken. I do have a tendency to be relaxed. I wasn't always like that. There was a time when I was, you know, very volatile. But, you know, I changed."

"As a teenager, I would go after people with rocks and bricks and baseball bats and hammers," Carson told Todd. "And, of course, many people know the story when I was 14 and I tried to stab someone. And, you know, fortunately, you know, my life has been changed. And I'm a very different person now."

Carson has also referred to an incident in which he was held up at a "Popeye's organization" in recent weeks, as well as controversially said he would "not just stand there and let him shoot me" during a mass shooting.

Carson has long acknowledged the stabbing incident. GQ's Jason Zengerle wrote in a profile in March how, as a teenger, Carson "got into an argument with a friend over the radio station they were listening to. In a flash of anger, Carson tried to plunge a camping knife into his friend's stomach. But the knife hit the boy's belt buckle instead and snapped in half ... he prayed after the incident and it changed his life."

Carson also strongly defended the Second Amendment during his interview with Todd, saying "Noah Webster said that America would never suffer under tyranny if people were armed ... of course, we should be thinking about what can we do to keep dangerous weapons out of the hands of mentally unstable people."

Carson also clarified he believed in potential exceptions for abortion for women whose lives were endangered by pregnancy but otherwise said he opposed abortion even in cases of rape and incest and thinks Roe v. Wade should be overturned. Carson also said he stood by remarks linking Nazi gun control to the Holocaust. He also likened women who have abortions to slave owners, saying they "thought that they had the right to do whatever they wanted to that slave," according to Think Progress.

Positioning himself as a deeply conservative candidate might have won Carson equal footing with Trump in Iowa, but is has also landed him a reputation as perhaps the furthest right of all of the highly polling Republicans. (A Washington Post study of Twitter users found only Texas Sen. Ted Cruz's following was more conservative than Carson's.)

Carson also isn't the only 2016 candidate to refer to a violent past. Democrat Jim Webb, who fought during the Vietnam War, told host Anderson Cooper the greatest political enemy he had ever made was "the enemy soldier that threw the grenade that wounded me, but he's not around right now to talk to."