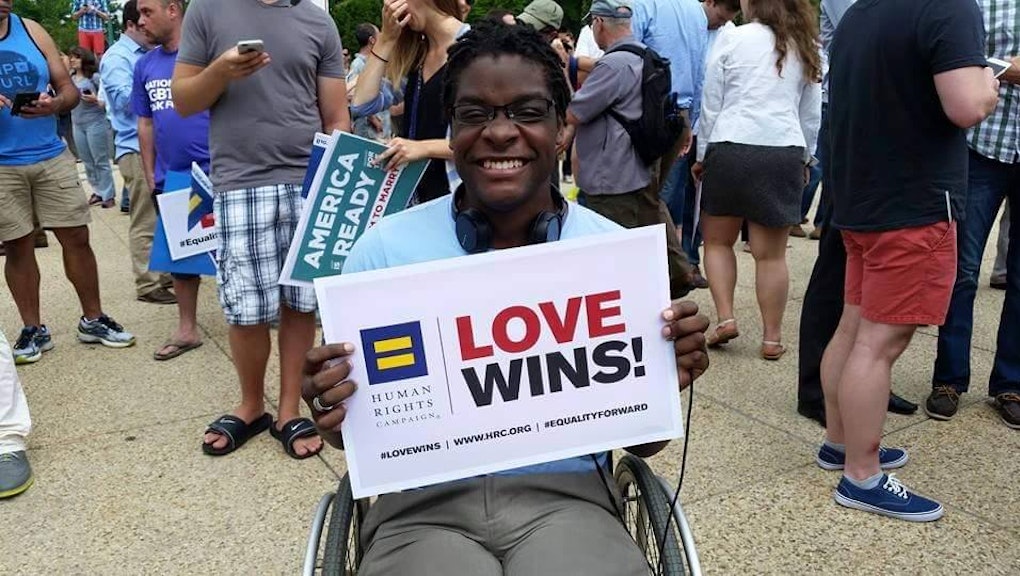 D'Arcee Neal is no stranger to travel and the complications that can come with it, but his experience on a United Airlines flight Tuesday went beyond imagination. Having lived with cerebral palsy since birth, he's used to dealing with flying with a wheelchair, but this was the first time he had to get on his knees to reach his final destination.

After a five-hour flight from San Francisco to Reagan National Airport in Arlington, Virginia, the airline allowed all passengers to exit the plane before they brought in the aisle chair, which allows people who use a wheelchair to get in and out of the aircraft. The aisle chair, however, was sent away without Neal's knowledge. Neal told Mic that after waiting more than 45 minutes for an attendant to bring the aisle chair, he was forced to take matters in his own hands.

Since bathrooms on planes are not wheelchair-accessible, Neal said, he hadn't gone to the bathroom in almost six hours.

"Airline bathrooms are terrible, the way they are designed if you can't physically stand up, you can't use them," Neal said. He needed to go — like yesterday — but he said attendants simply kept demanding he wait.

"I said, 'I'm leaving,' and they said, 'What do you mean you're leaving?'" Neal told Mic. That's when he crawled halfway through the aircraft (he wasn't seated near the front) to finally access his wheelchair, which was at the front of the plane. Neal described the entire experience as "humiliating" and "degrading."

Being accommodating: Neal said the airline industry is stuck in the stone age when it comes to accessibility. He explained there's no universal protocol when it comes to reasonable accommodation. "Whatever they choose to do for you is up to the whim of the airline," he told Mic. "My time is as valuable as everyone's else's on that plane. If their staff was trained and specialized in this, this wouldn't have happened."

Minor changes to the industry could make a monumental difference for those living with a disability. Designated front-row seating for people with special needs would be a start, Neal said. When it's time to exit the plane, airlines let everyone else out first when he said it should be the opposite.

"Let the person with a disability off first. It's not a hard thing to do," Neal said. "I feel like the airline industry views people with disabilities as secondary because we don't really travel, so [the industry doesn't] view it as necessity to modify their rules and regulations and planes and spaces to accommodate appropriately. That's why there were 27,500 incidents with people with disabilities last year," he said, citing figures from the National Disability Rights Network.

The response: Neal said United called him after the incident to apologize.

Mic emailed United for comment, and a representative responded, "In the situation involving Mr. Neal, an aisle chair was waiting at the gate when his flight arrived. As customers began to exit the aircraft, we made a mistake and told the agent with the aisle chair that it was no longer needed, and it was removed from the area. When we realized our error — that Mr. Neal was onboard and needed the aisle chair — we arranged to have it brought back, but it arrived too late. We've apologized to him for that delay."

Neal said the manager in charge had been suspended, but that claim has not yet been confirmed by United to Mic.

"We hope that all of our customers understand that this situation doesn't reflect the level of service we provide to customers with disabilities each day," the representative said.

As the nation marks the 25th anniversary of the Americans with Disabilities Act, Neal said the law still does not do enough because it does not mandate companies to do anything specific to accommodate people with disabilities. "Corporations know that and do the bare minimum to ensure that they can say that they are complying and in the majority of cases," he said, "the people aren't even trained."