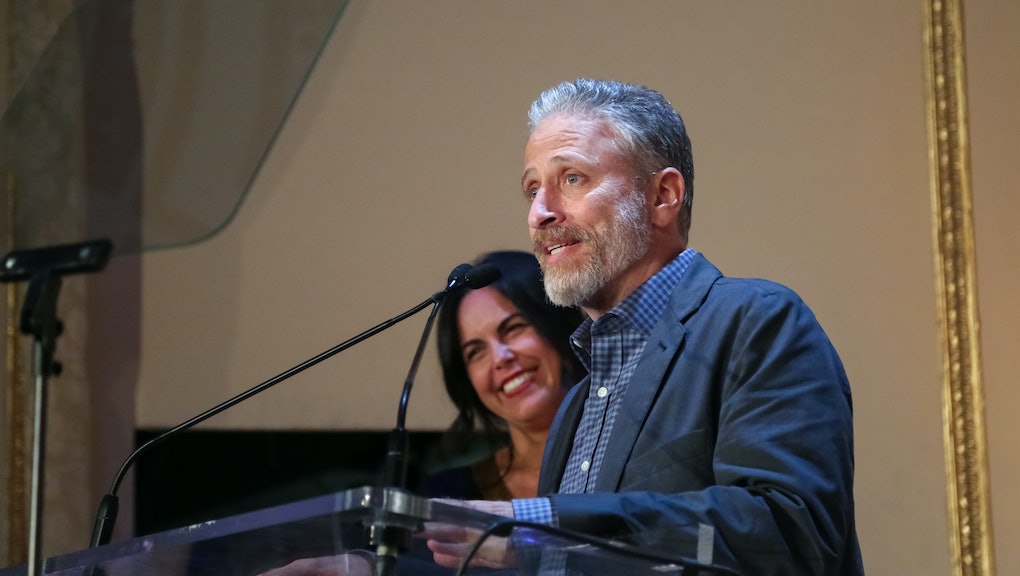 Done With Comedy, Jon Stewart Is Opening an Animal Sanctuary

Jon Stewart, who redefined news and comedy for a generation as host of the Daily Show, is gearing up for his next act, owning and operating a sanctuary for rescued factory farm animals.

The comedian, along with his wife, Tracey, made the announcement at New York's famed Plaza Hotel on Saturday, during a gala for Farm Sanctuary, an animal rights nonprofit. The couple purchased a 12-acre farm Middletown, New Jersey, in 2013.

"I'm a little uncomfortable," Stewart told gala participants, Agence France-Presse reported. "I've spent the last 20 years immersed in the world of Washington politics and the media landscape, so I don't know how to deal necessarily with people who have empathy."

"I've spent the last 20 years immersed in the world of Washington politics and the media landscape, so I don't know how to deal necessarily with people who have empathy."

Jon Stewart's wife Tracey Stewart was previously affiliated with Farm Sanctuary and was the subject of a recent New York Times profile documenting her work on behalf of animal rights. Her first book, Do Unto Animals: A Friendly Guide to How Animals Live, and How We Can Make Their Lives Better, was published earlier this month.

Farm Sanctuary was founded in 1986 and currently operates animal refuges in upstate New York, Los Angeles, and Orland, California. "The joy of interacting with animals as friends instead of using them for human consumption is life-changing," Tracey Stewart said in a recent Farm Sanctuary press release. "A trip to Farm Sanctuary should be on everyone's to-do list."

During his 16-year tenure at the Daily Show, Stewart evolved from a comedian into one of the most powerful voices of the Millennial generation. Between his ascension in 1999 to his retirement this year, Stewart regularly hosted presidents, prime ministers, military dictators, nobel laureates and an unending stream of the brightest Hollywood stars. His takedowns of legacy media Like CNN's Crossfire, Fox News' Glenn Beck — and really Fox News' everything — have become essential Internet viewing.

At times, he could also be serious, including emotional monologues delivered after Sept. 11, 2001, and the Charleston Massacre and his advocacy for the James Zadroga Act, which provided federally funded medical service to 9/11 first responders.

Stewart also made time on-air for the animals, dedicating a withering dressing-down to New Jersey governor and Republican presidential candidate Chris Christie for his refusal to sign a law that would have banned pig gestation crates, typically used in factory farming. Stewart also hosted Farm Sanctuary's president and co-founder Gene Baur in April.

Stewart, who spoke of his affinity for corned beef on his show, also noted that, "It's harder to eat meat when you know the animal's name."