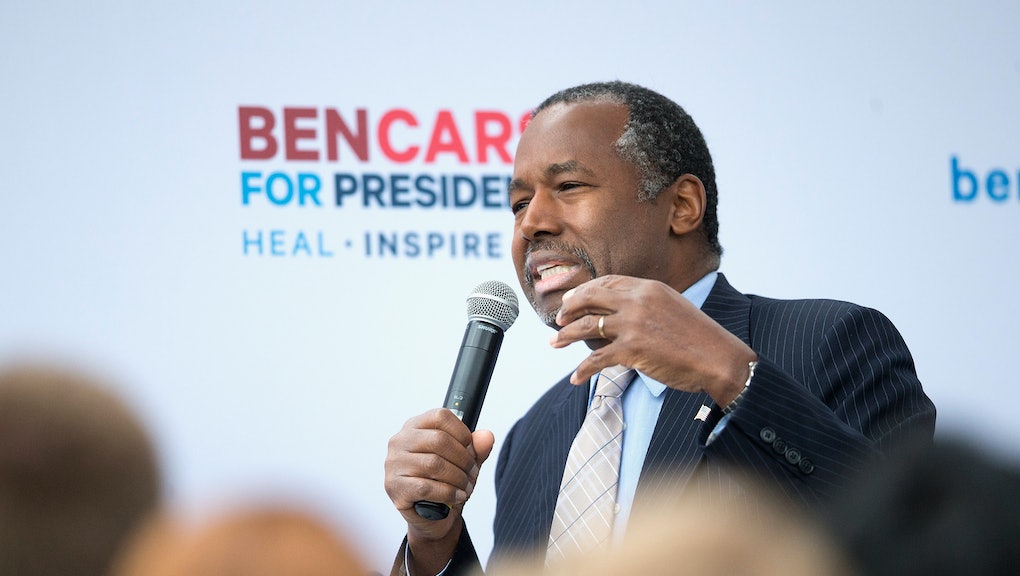 In an interview with NBC's Meet the Press on Sunday, Republican presidential candidate Ben Carson told Chuck Todd that he believes women who seek to terminate unwanted pregnancies are equivalent to slave owners who "thought they had the right to do whatever they wanted."

Todd asked Carson whether unwanted pregnancies resulting from cases of rape and incest were exempt from the candidate's staunch anti-abortion position.

"Rape or incest: I would not be in favor of killing a baby because the baby came about in that way," Carson said. "And all you have to do is go and look up the many stories of people who have led very useful lives who are the result of rape or incest."

Earlier in the conversation, Carson equated abortion to slavery: "Think about this. During slavery — and I know that's one of those words you're not supposed to say, but I'm saying it. During slavery, a lot of the slave owners thought they had the right to do whatever they wanted to that slave ... And what if the abolitionists had said, 'You know, I don't believe in slavery, I think it's wrong. But you guys do whatever you want to do.' Where would we be?"

"Whose right, I guess, should be superseded — the mother or the unborn child?" Todd asked Carson. "Who has greater rights?"

"We've allowed purveyors of division to make mothers think that that baby is their enemy and they have a right to kill it," Carson said. "Can you see how perverted that line of thinking is?"

"What if somebody has an unwanted pregnancy?" Todd said. "Should they have the right to terminate it?" Carson replied, "No."

Carson has galvanized support through some of his more extremist comments and stances. A Friday Bloomberg Politics/Des Moines Register poll surprised many — Carson included — when it revealed that Carson has 28% support in Iowa, overtaking Republican candidate Donald Trump, who currently only has 19% support in the crucial primary caucus.

The poll attempted to identify the source of his favorability with followup questions. For example, 81% of respondents, including those who do not support Carson, found his comments on Obamacare "mostly" or "very attractive." (Once more invoking the slavery comparison, Carson described the health insurance overhaul as "the worst thing that has happened in this nation since slavery.")

"Presented with other out-there declarations, like when Carson suggested that a better-armed German public might have successfully fought off Hitler, or his claim that no Muslims should ever be elected president, the response was similarly positive, with 77% and 73% of voters, respectively, saying they liked what they heard," Mic's Gregory Krieg writes.

It is possible, then, that Carson's latest comments comparing women seeking abortions — including rape victims — to slave owners might serve the candidate well.