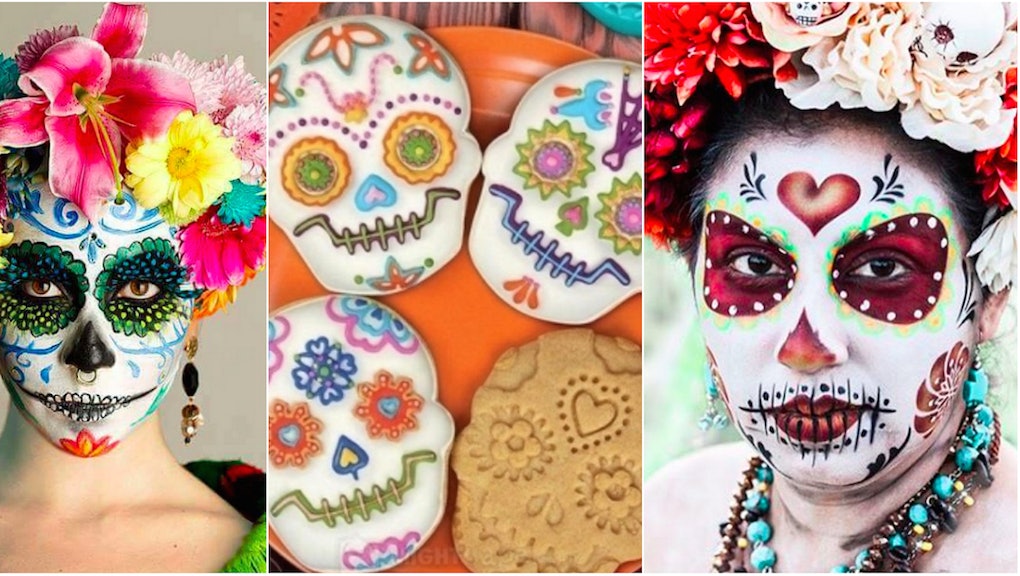 When Halloween rolls around, it brings with it the usual holiday decorations laden with pumpkins, witches, ghosts, spiders — and, of course, those haunting symbols of death, skeletons and skulls.

Yet there's another holiday, falling around the same time as Halloween, where skull imagery dominates. These colorful skulls — from candied versions piped in pink, blue and orange icing, to faces painted with toothy grins and flower adornments — are anything but spooky. Instead, they're joyful and lighthearted symbols for a holiday where the deceased are honored and death is celebrated as merely another part of life.

When you're scrolling and see your feed filled with faces done up as skulls and people dressed as skeletons in dapper suits and gowns, you're not staring at another Halloween costume. They're the happy skulls of Day of the Dead, and they're a deeply rooted tradition.

Death is nothing to be afraid of: Painted skulls are a key part of Day of the Dead, a holiday originally celebrated in Mexico that's since spread to other parts of Latin America and the United States. The holiday's imagery is a beautiful blend of Mexican and Latin American culture that's evolved from its indigenous, pre-colonization roots into a pan-Latino celebration that's become more popular over the years.

Day of the Dead is sometimes mistaken as Mexico's version of Halloween, though the two have little in common beyond the superficial. Day of the Dead is a two-day holiday running from Nov. 1-2 (though it technically begins at midnight on Oct. 31, so it's not uncommon to find people celebrating early).

The holiday used to be a monthlong celebration, before the Spanish conquistadors condensed the time of celebration and had it coincide with the Catholic holidays of All Saint's Day and All Soul's Day.

At times, it can become a simple "let's just paint out faces" kind of holiday, without any of the original intent of honoring of the dead. Either way, the image of a colorful skull remains a recognizable icon for the festivities even as it's become a mainstream fashion item.

The imagery of skulls goes back to pre-Colombian times, when skulls played symbolic roles for the Aztecs and other Mesoamerican cultures. The Aztecs held that the dead lived in a world parallel to the living, and that during a brief window of time they would cross between the two worlds to visit their loved ones.

To this day, in order to prepare for their visit, families erect colorful altars decorated with delicate paper banners. The altars include photos of those who've passed away; family members present an "ofrenda," or offering, to the dead, usually a favorite meal, along with food like sweet bread, called "bread of the dead," and sugar candy skulls featuring the name of a loved one who has passed away.

"La Catrina," seeing Death as an elegant lady: The typical mourning and tragedy associated with death in Western culture is absent from Day of the Dead. Instead, it's a celebration of life that's readily apparent in the décor. People might paint their faces to resemble a skull, but they wear the look with a smile.

One of the most iconic figures and images in Day of the Dead is La Catrina, an elegant female skeleton that people sometimes dress up as. While there are indigenous versions of La Catrina, the most popular version is based off a creation by José Guadalupe Posada, a Mexican print illustrator who sketched her as a way of ridiculing the Eurocentric elite living in Mexico during the revolution. His influence on later painters, like Diego Rivera, helped further popularize the imagery of skulls in Mexican folklore.

Transforming into La Catrina IRL: To this day, people sometimes dress up as La Catrina, wear masks or paint their faces with their own creative designs. That's all easier than ever to do, as a new generation of makeup artists and culture enthusiasts inspired by the Day of the Dead share tutorials and information on the web.

There are more than 240,000 YouTube videos focusing on how to do the skull face paint. On Instagram, there are 790,000 posts tagged #DayoftheDead (there are 614,000 posts using the Spanish hashtag #DiadelosMuertos). And on YouTube, you can find plenty of step-by-step tutorials to try the look.

Their actions have opened the doors for more people to enjoy the holiday. New generations keep the Day of the Dead traditions going, often in public city squares where the public is welcome to join. It's in these gatherings, big and small, that people who aren't familiar with the holiday have the biggest opportunity to learn about it.

It's an occasion for cultural appreciation instead of appropriation; instead of merely copying a look from the Internet, people are invited to a space to learn about a tradition that dates back long before any of us were walking.

If you're scrolling through your Instagram feed this week and you see it filled with skulls, no need to shudder. A bit of skeleton makeup can be a celebration of life.