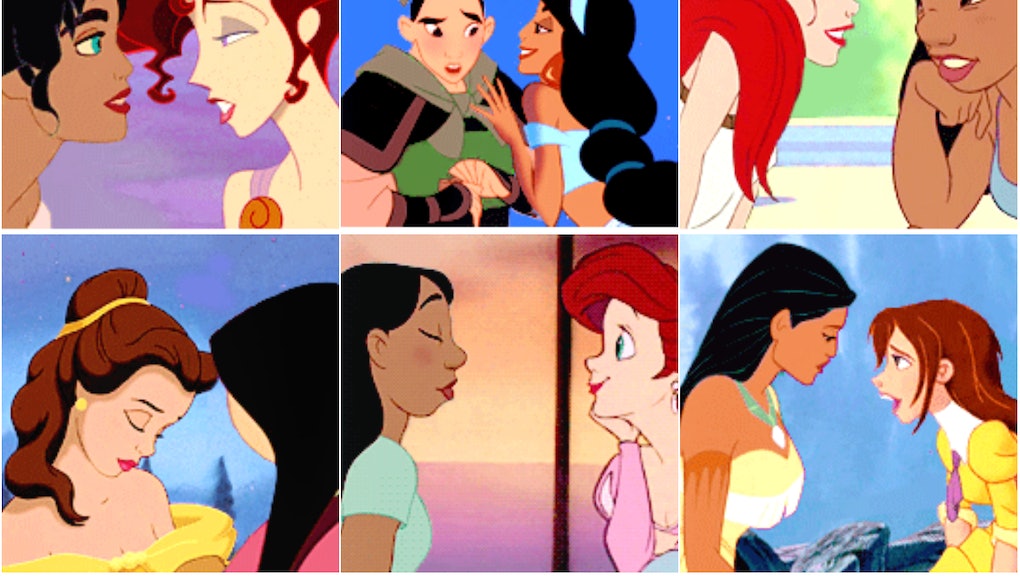 You probably won't be surprised to hear that your favorite Disney movies aren't super strong on LGBT issues. Of the 11 princesses in the Disney canon, not a single one has identified as not-straight, and even among the villains, there is nary a non-heterosexual character to be found. (While many a problematic conspiracy theory exists regarding Ursula from the Little Mermaid, everyone knows she was actually more of a drag queen than anything.)

In all seriousness, the glaring lack of non-heteronormative relationships in Disney films is kind of troubling — not to mention unfair to the legions of young gay girls who might be looking for some representation. Imagine being 8 years old and looking for a sign, any sign, that your same-sex attraction is as valid as that of, say, Jasmine's love for Aladdin.

Luckily, Tumblr user simonbaz is here to address this problem with some delightful lesbian Disney fan fiction, as told through GIFs and elaborate narratives. There's Belle and Mulan. There's Pocahontas and Jane from Tarzan. And if you were a queer girl growing up in the mid-'90s Disney era, there's also Megara from Hercules and Esmeralda from Hunchback of Notre Dame:

Simonbaz's recent matchup of Lilo & Stitch's Nani and The Little Mermaid's Ariel is an aquatic lesbian tale of true love and longing.

"Every time Ariel sees the lovely surfer human, her heart is torn between swelling up with love and awe, and painfully DESPERATELY aching with the need to be on land with her," the Tumblr backstory reads. Ariel watches Nani from afar, knowing she can't just casually be like, "Hey, I'm a mermaid, hi," to a hot surfer human.

"The moment Ariel breaks her vow of anonymity is when Nani gets a painful leg cramp in the middle of catching a big wave," the post continues. "Ariel doesn't know what's wrong, but she sees Nani topple off her surfboard and start sinking. Ariel quickly dives under and carries Nani to shore."

After Ariel's heroic act of courage, the two get to know each other and become inseparable. Ariel eventually becomes a human, and boom! In true Disney fashion, they kiss and live happily ever after.

The trend of Tumblr Disney femslash is decidedly less salacious, however, with more of an emphasis on romance and story. As simonbaz wrote of the romance between Esmeralda and Megara: "Esmeralda would love the complexity of Meg's personality. She'd love figuring Meg out. When Esmeralda looks at Meg, she sees a beautiful, intelligent, caring, wonderful person whose witty remarks always make her laugh...

"Anyone lucky enough to witness Esme and Meg seducing each other would melt into a puddle and probably never solidify."

Hopefully with enough projects like this, maybe one day Disney will get the message and we'll be lucky enough to witness a legitimate (albeit staunchly G-rated) lesbian love story firsthand.

Until then, we'll be sure to keep checking back in on Tumblr on Femslash Friday.

Check out all of simonbaz's Disney femslash posts here.