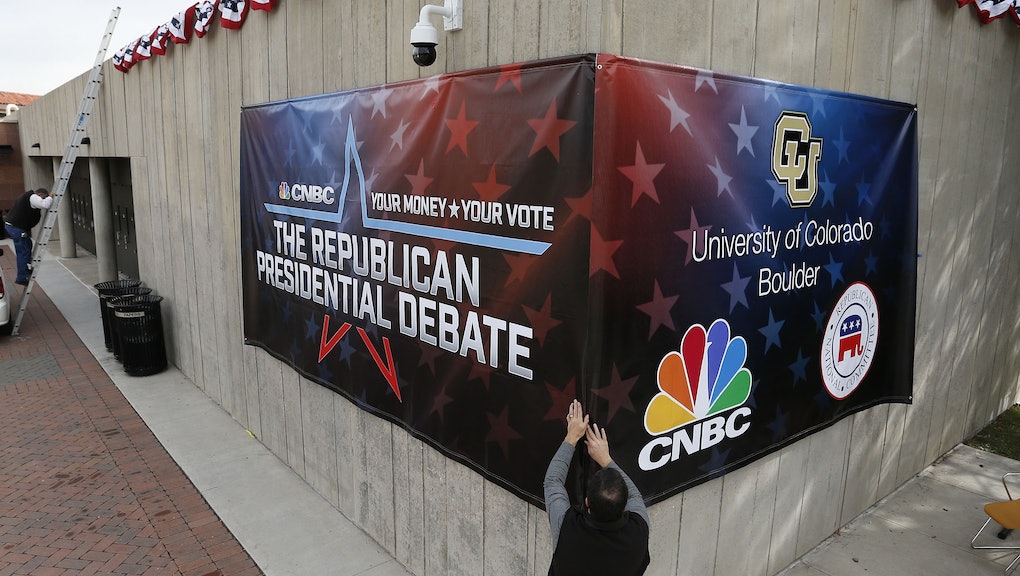 CNBC will host the third Republican debate Wednesday on the long road to the 2016 presidential election. Beginning at 8 p.m. Eastern, the party's top candidates will gather on stage at the University of Colorado in Boulder to participate in the debate. Ahead of the showdown, here's where the Republican candidates stand, according to the most recent polls.

A new leader: The tides are turning in the race, as retired neurosurgeon Ben Carson has pulled ahead of real estate mogul Donald Trump. According to a Quinnipiac University survey released Sept. 11, 27% of likely Republican voters in Iowa, a key early battleground state for presidential candidates, would have voted for Trump, while 21% said they would have voted for Carson. Yet according to Quinnipiac poll released Oct. 22, Carson is now leading Trump 28% to 20% in the state.

"It's Ben Carson's turn in the spotlight," Peter A. Brown, assistant director of the Quinnipiac poll, said in a university release.

A survey Tuesday via the New York Times and CBS News reinforced and advanced Quinnipiac's findings, reporting that Carson is the top-polling candidate not just in Iowa but nationwide. According to the joint survey, Carson is the first-choice candidate for 26% of Republican primary voters, followed by Trump at 22%.

Where the candidates stand: The most recent Quinnipiac poll for Iowa put Florida Sen. Marco Rubio in third place at 13% followed by Texas Sen. Ted Cruz at 10%. Texas Sen. Rand Paul is polling at 6%, while former Hewlett-Packard CEO Carly Fiorina and former Florida Gov. Jeb Bush are tied at 5%. The remaining Republican 2016 presidential candidates polled at 3% or below, according to the data.

According to the New York Times-CBS News survey, Carson and Trump are beating out the other Republican candidates by a wide margin. Rubio is polling at 8% per the poll, followed by Bush and Fiorina at 7%. Former Arkansas Gov. Mike Huckabee, Ohio Gov. John Kasich, Paul and Cruz all polled at 4%.

When it comes to the party's new front-runner, "Many in the political world still are trying to understand Carson's appeal and how someone who seems to be operating outside the traditional news media/political environment is doing so well among the most conservative GOP voters," Brown said in the release. "Today's results show his appeal is especially strong among the state's sizeable white, evangelical Christian community, among whom Carson is receiving 36%, twice Trump's 17%."

Wednesday's debate, dubbed "Your Money, Your Vote," will focus on economic issues, among them tax reform, Social Security, a possible government shutdown over budget disputes and marijuana legislation, according to CNBC. There's also the questions of where the GOP's top-polling candidates stand on tax reform and immigration, two topic's that are likely to come up.