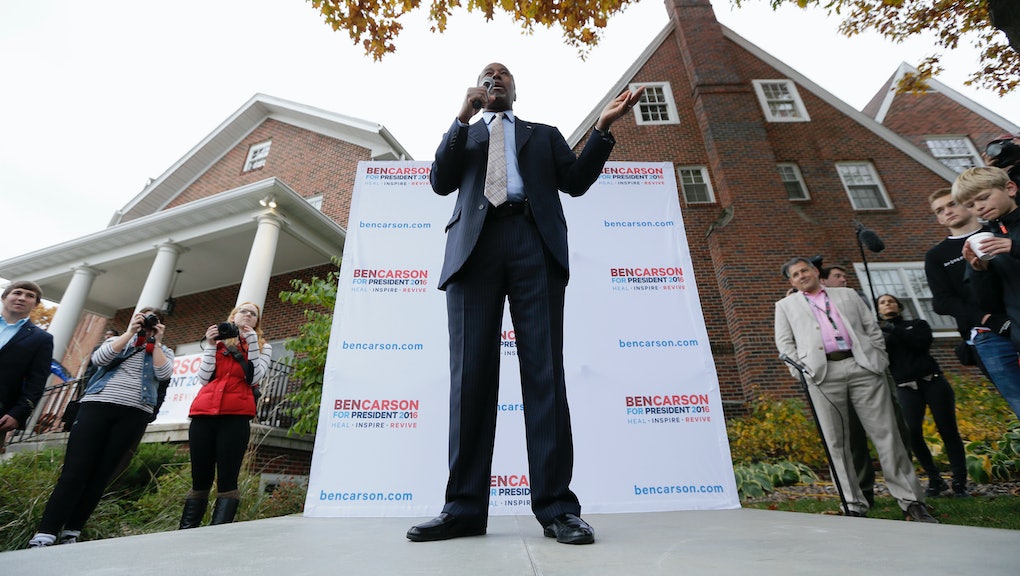 After four months of nearly uninterrupted dominance of the Republican primary field, Donald Trump is losing his edge and, according to a new poll, his lead among GOP voters.

But like so much else in this oddball race, the candidate poised to topple Trump isn't an establishment favorite like former Florida Gov. Jeb Bush or even the rising conservative Texas Sen. Ted Cruz. The new leader is Dr. Ben Carson, the retired neurosurgeon and political neophyte with a knack for saying things that might make even Trump blush.

According to the new CBS News/New York Times poll, Carson now leads the Republican field with 26% support to Trump's 22%. In a similar poll from early September, Trump led Carson, who was running second, by a 4-point margin. Florida Sen. Marco Rubio clocked in third at 8%, a point ahead of Bush and former Hewlett-Packard CEO Carly Fiorina.

Down goes Donald? This is the second time in less than a week that the ascendant Carson has surpassed the stagnant Trump in a major poll. On Friday, Carson jumped ahead of Trump in Iowa, according to a Des Moines Register/Bloomberg Politics survey. Four of the five most recent polls out of the Hawkeye State have shown Carson either leading or tied with the longtime frontrunner.

Trump has been taking the news as one might expect him to: poorly. In Miami on Friday night, he trotted out his favorite diss line, calling the typically subdued Carson "lower energy than Bush," whom Trump has repeatedly ribbed for his reserved demeanor.

"We have a breaking story," Trump said. "Donald Trump has fallen to second place behind Ben Carson. We informed Ben, but he was sleeping."

Carson mostly laughed off the familiar attack. He said Sunday on NBC's Meet the Press that he chooses to project calm now in part because of his "volatile" childhood. "I have a tendency to be relaxed," he said on Meet the Press. "I wasn't always like that."

Still unanswered, though, was Trump's mocking of Carson's religion.

"I'm Presbyterian," Trump told supporters at another Florida rally. "That's down the middle of the road, folks, in all fairness. I mean, Seventh-day Adventist, I don't know about. I just don't know about." Carson is a member of the latter, which unlike other Protestant churches observes the Sabbath on Saturday and preaches an imminent second coming of Jesus Christ.

Talk it out: When the two meet face to face Wednesday night for the third Republican debate in Boulder, Colorado, Trump and Carson will again be planted center stage and no doubt given plenty of opportunities by the moderators to iron out their issues on live television.

Despite its familiar roster of candidates, the CNBC debate will be the first to play host to a Trump who senses his beloved poll numbers at risk. But lashing out at Carson could be a dangerous game, especially if he chooses to mock Carson's religion — again.