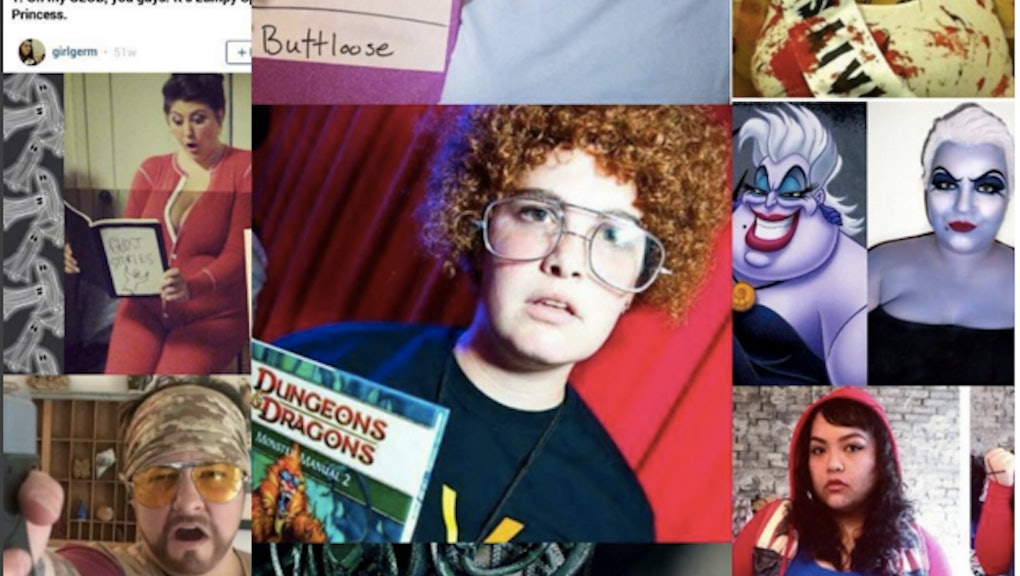 Halloween wasn't always about sexy ghosts or a kinky cat. While dressing up has been inherent to celebrating the holiday since the 19th century, the holiday didn't become risqué until the 1970s, and "ultra sexy" costumes didn't emerge until the turn of the century, according to Slate. A few short decades later, women in particular are expected to dress in ways almost too absurd to be truly insulting for the holiday sometimes known as "slutoween."

But this sexy mandate need not be sexist, according to body positive activists Lillian Bustle and Virgie Tovar. Both women told Mic that they — as well as plenty of other women — are reclaiming the holiday in a number of truly empowering ways.

They're embracing their sexuality. Yes, women's Halloween costumes have become hypersexualized. But this sexual expression need not solely be an act of compliance with objectifying norms. Intentionality, Bustle and Tovar both said, is key.

While allowing the male gaze or external pressure to appear "sexy" to dictate one's costume choice is concerning, Bustle told Mic, women should still feel comfortable wearing "sexy, revealing costumes" if it's an act of "celebrating their bodies."

Tovar agrees. Because Halloween is "seen as the one acceptable day of the year that American women can express unbridled sexuality," she told Mic, they are permitted "a sort of sexual plausible deniability" that can be particularly liberating. While she acknowledged that women may still face slut-shaming even when embodying their sexuality in a personally empowering way, this should serve as a pertinent reminder of "how constrained women's sexualities are supposed to be the rest of the year" and how necessary such rebellious acts are.

They're using the opportunity to increase visibility. While women of size often feel marginalized and stigmatized, Halloween is a great opportunity for women to push back with pride. For example, deliberately choosing to dress as a notable fictional plus-size character — like Ursula from The Little Mermaid, as shown in a recent BuzzFeed post Tovar compiled — is "a bold statement of both fat visibility and the reclamation of alternate femininity," Tovar told Mic.

Conversely, dressing up as a thin character can also make a statement. While Bustle once worried people wouldn't know who she was should she dress as a non-full figured person, she eventually realized that "making up my own rules and wearing whatever I want" is ultimately in line with the Halloween spirit of disguise and escapism.

That many store-bought costumes — especially those deemed "sexy" — aren't available in plus sizes, however, indicates just how needed these acts of visibility are, Bustle noted. Even when costumes are offered in larger sizes, she added, they're frequently adapted to cover more skin.

"I feel like this sends the message that larger bodies aren't meant to wear sexy, revealing costumes," she said. "I want young people and fat people to know that it's okay to choose a costume because they love that costume, and not because they feel pressured to conform to some made-up societal standard."

They're expressing love for themselves. Beyond the message one's costume sends to others, exploring alternative presentations — whether in terms of clothing choice, gender presentation, or makeup — can be a meaningful way for individuals to reconnect with themselves, Bustle said.

"We can often feel out of control of our own bodies," she said. "Taking the time to create a new image for yourself, to play with how you present yourself to the world, can make you feel in control. It can be a very rewarding adventure ... sometimes it takes a conscious effort to experiment with how you look for elements of your authentic self to come out."

Yet obstacles remain. While bold costume choices can certainly be personal acts of empowerment, Tovar and Bustle acknowledge that a broader cultural shift is still necessary before those acts can fully be interpreted as such by others. For example, Bustle's observed street harassment is a significant issue on Halloween, especially for "women of all sizes and the LGBT community."

"There's still a cultural notion that the public has permission to comment on your body, especially, if you're dressing in a way that's perceived as unusual or controversial, or gender-nonconforming," she said. "Until we see a huge paradigm shift regarding respect and boundaries, people are going to keep hollering."

Sadly, it comes down to this: Individuals must be physically and emotionally prepared for harassment but ultimately know that "we, the targets, are not to blame."

Ideally, despite remaining obstacles, women will apply the aforementioned positive lessons learned during Halloween to their daily lives. As Tovar noted, her "desire to dress up on Halloween has dissipated the more I dress however I want — and do whatever I want — the rest of the year."