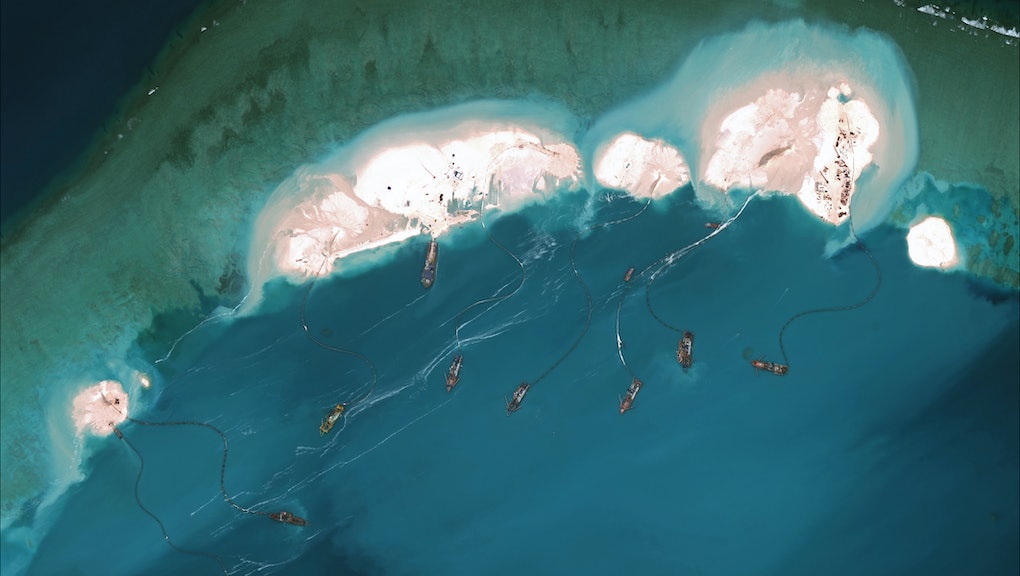 The U.S. Navy Just Sent a Warship to Stare Down China

In the run-up to his United States visit last month, Chinese President Xi Jinping was given a blunt reminder by U.S. National Security Advisor Susan Rice, who in a speech said the U.S. "will sail, fly and operate anywhere that international law permits," Newsweek reported. "I can assure you President Obama will be just as direct when he sees President Xi."

On Monday, the United States made good on its pronouncement, pointedly sailing a navy destroyer into the South China Sea and close to the Spratly Islands. The islands and much of the surrounding area have been claimed by China as part of its "inherent territory," an area also claimed by neighboring countries Malaysia, the Philippines, Taiwan and Vietnam.

Maps produced by China indicate the territory lies within the so-called "nine-dash line" (marked in green on below map). Geographically, much of the territory, like the James Shoal, is hundreds of miles closer to neighboring countries than to China.

In addition to being a vital shipping lane, the area holds potentially vast untapped reserves of natural gas, making it of particular value in China's well-documented quest for international resources.

In recent years, China has also moved to create facts on the ground by building artificial islands atop the territory's shoals and reefs. While Xi has said that his nation "does not intend to pursue militarization" of the islands, the country has been building runways on a number of them sufficient for military aircraft. Meanwhile, in a press conference, a spokeswoman for the foreign ministry said that the islands would host "necessary military facilities."

In addition to sailing through the waters, U.S. officials took the additional pointed step of pursuing the plan without informing their Chinese counterparts. "You don't need to consult with any nation when you are exercising the right of freedom of navigation in international waters," a state department spokesman said at a press conference, the New York Times reported.

China's state-run media denounced the move as provocative and reiterated their own claims to the disputed territory. "It is understandable for the U.S. to be posturing as a defender of world order, as it always claimed to do so, for itself or for its allies, but sending warships and planes to the islands may have stepped out of the line. Worse still, it is counterproductive to the solution of the disputes," according to the Xinhua News Agency, which typically reflects government opinion. "The U.S. should not be overconfident about its ability to steer clear of collision. The sea is no less safe than the airspace."

Indeed, as the editorial suggests, ramped up U.S. activity in the region combined with China's new assertiveness could lead to dangerous accidents. In 2001, a U.S. Navy spy plane operating near the Chinese island of Hainan collided with a Chinese fighter jet which had been tailing it, killing the Chinese pilot.

As China moves to assert itself on its home turf and the U.S. openly declaring its intent to "pivot" to Asia, mutual suspicion and distrust are only likely to grow.