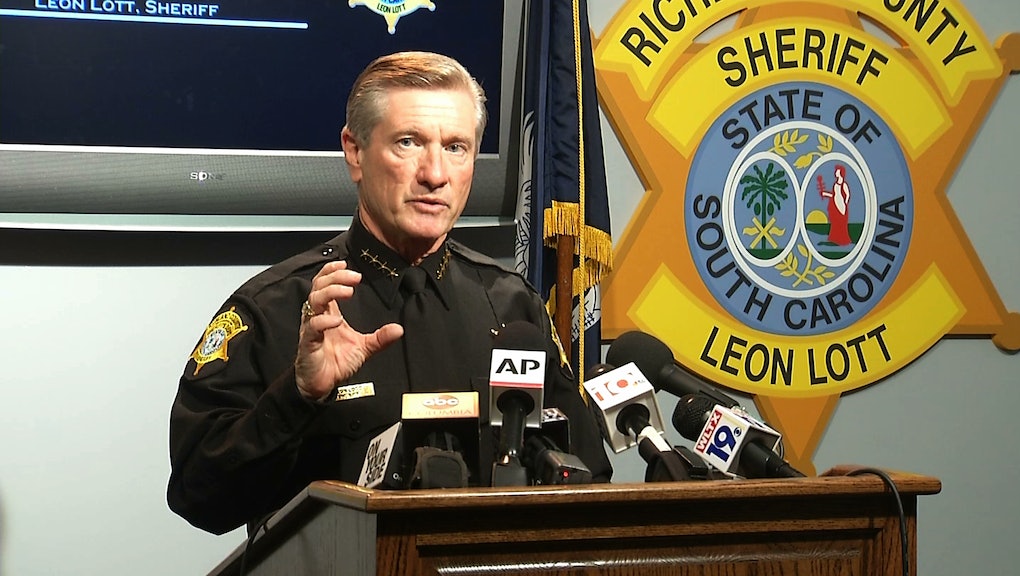 7 Ways the #AssaultAtSpringValleyHigh Was Definitely Not About Race

Video went public of a white school resource officer named Ben Fields grabbing a black 16-year-old Spring Valley High School student by her neck, slamming her to the floor and dragging her across a classroom on Monday.

The girl had allegedly been asked to report to the principal's office for using her phone in class but refused, prompting her math teacher to call for law enforcement backup.

This incident was not about race. In South Carolina, 50% of U.S. Senators are black. Black parents in Richland School District Two, where Spring Valley High is located, have only had to form a special committee to address racial disparities in schools once in the past year. Black students are suspended just a teensy bit more than their share of the student population in the district — 77% suspension rate versus 59%. The New York Times even reports that "students of divergent backgrounds socialize together" at Spring Valley High sometimes.

But don't let this vision of racial harmony convince you. Below are seven more examples of how decidedly non-racial the #AssaultAtSpringValleyHigh actually was.

1. Fields has been "dating an African American female" for some time.

Sheriff Leon Lott of Richland County said at a press conference Tuesday that he didn't think race had anything to do with Fields' actions. For evidence, he mentioned that Fields "has been dating an African American" woman for "quite some time."

2. The school employee who watched Fields assault the girl was also black.

As Fields pummeled the yet-unidentified girl, the camera panned over to reveal a black adult — either the math teacher who summoned Fields or another administrator — standing back and observing.

By refusing to intervene, this adult implicitly condoned Fields' actions. Since he is also black, his acquiescence disqualifies race as a factor.

3. At least one prominent black newscaster thinks we should not rush to judge Fields.

Respectable journalist and black spokesman Don Lemon hasn't decided whether this incident had to do with race.

But his reaction is telling: By reserving judgment and waiting for more details as to why this adult law enforcement official decided to throw an unarmed black child to the floor and drag her across the classroom, he is choosing truth and fairness over the predictable race baiting endorsed by his colleagues.

4. The black girl who was assaulted was not following the rules.

Black spokesperson, name expert and The View co-host Raven-Symoné (the "é" is silent) had one message Tuesday for the insolent child in the video: "Get off your phone."

Had the girl not been on her phone in the first place, she explained, none of this would have been a problem — clearly this has absolutely zip to do with the staggering rate at which black girls are subjected to zero-tolerance discipline policies and suspended from school (six times the rate of their white counterparts), not the asymmetric criminalization of students of color nationwide.

This was a simple matter of breaking the rules and facing consequences.

5. Her classmate who got arrested was also not following the rules.

Niya Kenny, 18, was also in the classroom at the time of the incident. Reports say she was the only person to speak up for the girl under attack but Fields was not having it. He arrested her too.

Black, white, purple or green, this wouldn't have been a problem had Kenny just sat quietly while Fields brutalized her classmate. The message is clear: Do not speak unless you want to be arrested.

It was necessary to involve the police in this incident because the threat of violence was imminent. The 16-year-old girl was sitting quietly in a threatening manner and had used a phone in a way that presented a dangerous challenge to authority.  And didn't anyone catch that she flailed her arms when Fields initially tried to grab her?

Just putting the officer's reaction into further perspective, consider this: Reports of violence in schools have seen a striking pattern over the past 20 years, illustrated by the chart above.

7. South Carolina has removed the Confederate battle flag from the grounds of its state capitol.

See? Racism was a problem in South Carolina during the years when the Confederate battle flag flew over the state capitol grounds. But those days are long gone. Since the ceremony in July that saw a vile symbol of slavery removed, racism has officially not been a problem in the state, which has only seen one act of mass racial terrorism this entire summer.

Otherwise, things are good. There's nothing else to see here. Move on with your life.