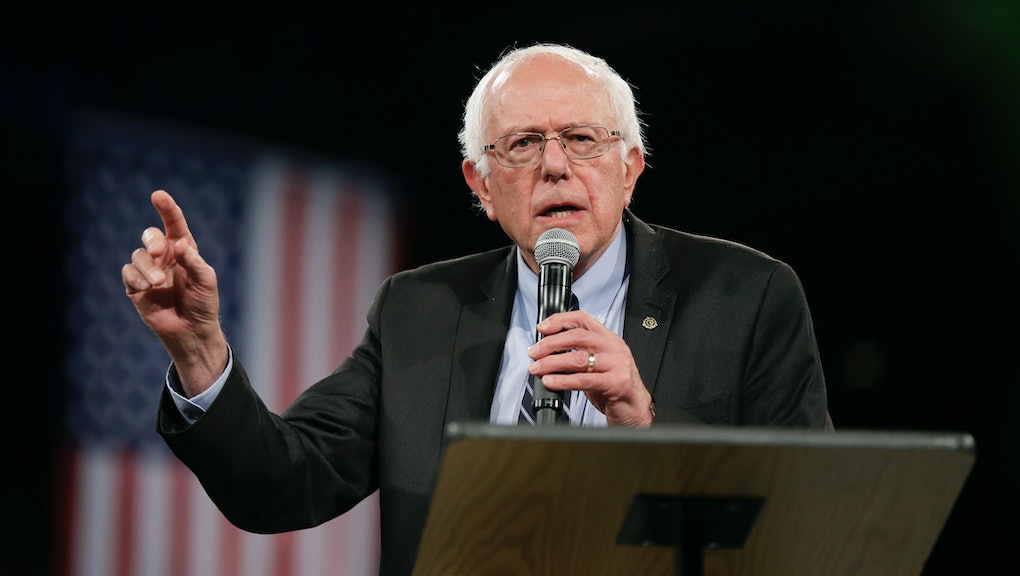 On Wednesday, the rabble-rousing senator from Vermont proposed the most aggressive marijuana policy reform in the Democratic presidential race to date. His plan? Remove the drug entirely from the federal government's official list of dangerous drugs.

"The time is long overdue for us to remove the federal prohibition on marijuana," Sanders said during a speech at George Mason University in Virginia. "In my view, states should have the right to regulate marijuana the same way that state and local laws now govern sales of alcohol and tobacco."

The move wouldn't legalize marijuana under federal law but it would dramatically enhance the ability of states to pursue their own marijuana policies without interference from the federal government.

"Among other things, that means that recognized businesses in states that have legalized marijuana should be fully able to use the banking system without fear of federal prosecution," Sanders said.

Many reform proposals, including recent bills in Congress that have failed to gain traction, have called for marijuana to be changed from a Schedule I drug — the most restricted controlled substance in the Drug Enforcement Agency's classification scheme — to a Schedule II drug. Sanders' demand goes further: He wants the drug to be removed from the scheduling system altogether, eliminating its legal status as a dangerous drug that warrants special legal restrictions.

Sanders' chief rationale for the move stemmed from his disillusionment with the war on drugs.

"In 2014 ... there were 620,000 arrests for marijuana possession. That's one arrest every minute," Sanders said. "Too many Americans have seen their lives destroyed because they have criminal records as a result of marijuana use. That is wrong. That has got to change."

Sanders also plans to draw attention to the racialized manner in which marijuana laws are enforced.

"There is a racial component to this situation," Sanders said. "Although about the same proportion of blacks and whites use marijuana, a black person is almost four times more likely to be arrested for marijuana possession than a white person."

The senator said that taking marijuana off the list of drugs most aggressively policed based on federal prescriptions should free up resources for states to address serious substance abuse problems — and provide a windfall for states that do choose to legalize (through taxation).

Sanders' main rival for the nomination, Hillary Clinton, has expressed support for decriminalizing marijuana and allowing access to it for medical purposes, but she's shied away from taking a stance on full-fledged legalization. Clinton has said that states should be able to pave the path on legalization, but she'd prefer to wait and see what happens in states like Colorado experimenting with legalization before taking a stance on it herself. She has not yet proposed anything along the lines of removing it from being scheduled as a dangerous drug.

Sanders' plan to remove the federal government's list of controlled substances would mean that marijuana experiments in states would go a great deal more smoothly. It would do things like end DEA raids, allow marijuana businesses to thrive and dramatically expand the the scientific community's ability to research the drug. And through this process, it would likely dramatically accelerate marijuana's increasingly likely path to legalization nationwide.