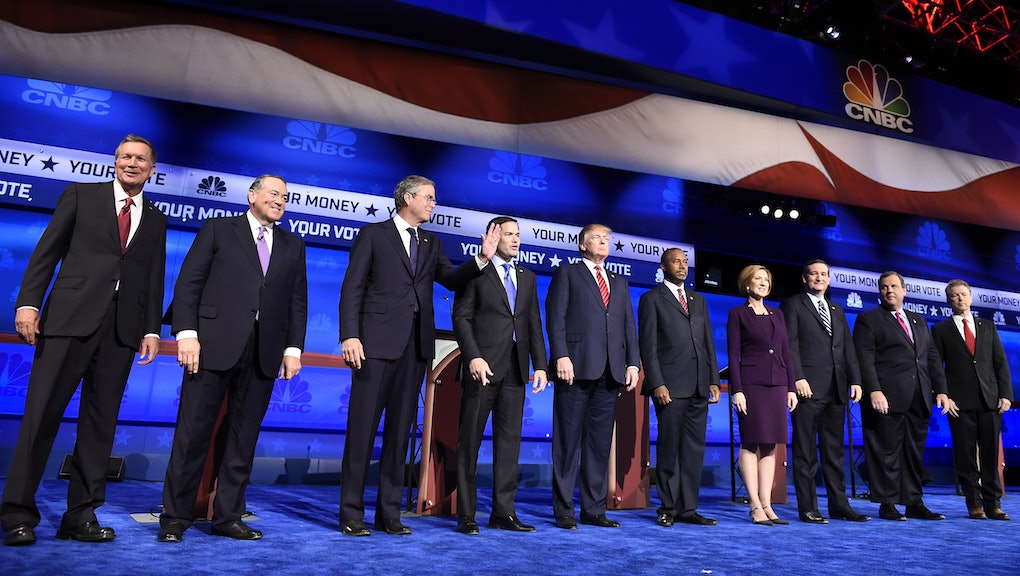 Republican presidential hopefuls gathered onstage at the University of Colorado Boulder on Wednesday for a two-hour-long debate hosted by CNBC. Like the previous Republican showdown hosted by CNN on Sept. 17, the evening was divided into two debates based on where candidates ranked in polls. Dubbed "Your Money, Your Vote," Wednesday's debate focused on the economy above all else.

The debate kicked into high gear right off the bat as CNBC chief Washington correspondent and debate moderator John Harwood asked the candidates to explain why their experience inside the political system made them more qualified to lead the American people than an outsider.

Though the candidates largely side-stepped the question, and Jindal and Pataki traded jabs over their respective efforts to shrink the size of the government, Pataki was ready to argue the opposition. "We need an outsider to run our party and to win the next election," Pataki said. "Washington has become a corrupt insider game. Everybody talks about how they're going to change the taxes, grow the economy — nothing seems to change."

Ahead of Wednesday's debate, Carson was leading the pack nationwide, beating out Trump, the party's long-time front-runner, according to a poll published Tuesday by the New York Times and CBS News. Among Republican primary voters, 26% said they'd choose Carson. Trump came second, polling at 22%.

We'll be updating this story with highlights from the CNBC Republican debate as it's going on.

Despite the latest polling figures showing Carson pulling ahead, Trump won the majority of CNBC viewers' favor ahead of the debate, according to a network survey.

Much like a job interview, CNBC's anchors got the debate rolling by asking the candidates to share their biggest weaknesses. The only candidate who sort of answered the question, and didn't simply state their platform, was Trump. "I trust people too much," Trump said. "I'm too trusting. When they let me down, if they let me down, I never forgive."

Christie, on the other hand, spun the question as an opportunity to attack the opposing party. "I don't see a lot of weakness on the stage," Christie said.  "Where I see the weakness in those three people that are left on the Democratic stage, you know, I see a socialist, an isolationist, and a pessimist.  And for the sake of me, I can't figure out which one is which."

Things got heated when CNBC anchor Becky Quick challenged Carson about his tax reform policy, alleging the plan was unworkable. Without spelling out how, Carson held his ground and claimed that once all the numbers were made public, the plan would "work nicely."

Early shots were fired when, in response to questions about Trump and Carson's tax plans, Kasich went on the attack. "Folks, we gotta wake up," Kasich said. "We cannot elect somebody who doesn't know how to do the job."

Not one to let attacks go unanswered, Trump struck back by arguing that Kasich was on the offense because his poll numbers had "tanked."

She argued for simplifying and reducing the government to level the playing field between the "powerful and the powerless."

Fielding a question about gay marriage, Carson, who served on the board of Costco, an organization that has come out in support of gay marriage, went on the defense. "Obviously you don't understand my views on homosexuality," Carson said. "I believe our Constitution protects everybody regardless of their sexual orientation."

The former neurosurgeon went on to explain that while he believes the Constitution is meant to protect all U.S. citizens, it's his belief that a marriage should "be between one man and one woman." Earlier this year, Carson apologized to the public after alleging that homosexuality is a choice, CNN reported in March.

When the candidates touched on the issue of super PACs, Trump was quick to call them a disaster and argued to abolish them completely. Rubio agreed, and again called into question the opposing party. "The Democrats have the ultimate Super Pac," Rubio said. "It's called the mainstream media."

Rubio's remarks drew loud applause and audible cheers from the audience, which was not the first explosive positive reaction the Republican candidate earned Wednesday evening.

Seeing as CNBC hosted Wednesday night's debate in Colorado, one of four states where recreational marijuana is legal, the moderators asked Kasich to speak on the legalization of cannabis. Moderators wanted to know if, given the budget pressures in Ohio, Kasich would consider adopting a cannabis economy to diversify its revenue stream. Though Kasich largely dodged the issue, he said, "Sending mixed signals to kids about drugs is a disaster," and spent the remainder of his response time detailing the work he's done to combat overdoses.

Given a chance to attack Trump next, Huckabee deferred. Instead, the governor from Arkansas pledged his support to the real estate mogul, who Huckabee said would make a better president than Clinton "any day of the week and twice on Sunday." Though his speaking time was limited, Huckabee dedicated the remainder of his response time to solidifying his "thing," which he claimed was coming up against the "Clinton machine" and living to tell the tale.

Taking the torch from Huckabee, Trump returned to his months-long chorus about illegal immigration. "I'm in favor of people coming into this country legally," Trump said during the debate. "You can call it visas, you can call it work permits." He then argued for increased boarder control. As those work permits relate to job creation, Trump said, "I have created tens of thousands of jobs and I'll be creating many millions of jobs if I'm given the opportunity to be president."

"But in 2015, we have a very different economy," he added. Rubio's solution, and what he argued for on Wednesday, is a a merit-based system of immigration that takes into account the qualifications of individuals looking to obtain American citizenship.

Next, Rubio took his attack against the Democrats one step further when he argued that press coverage of the Benghazi trial was an example of the media protecting liberals. During the 11-hour investigation into former Secretary of State Hillary Clinton's responsibilities during the 2012 attack on an American base in Libya, Rubio claimed she "admitted she had sent emails to her family saying, 'Hey, this attack in Benghazi was caused by al-Qaeda-like elements.'"

"Yet the mainstream media is going around saying, 'This was the greatest week in Hillary Clinton's campaign,'" Rubio said. "It was the week she got exposed as a liar."

Nearing the end of the debate, NPR Politics posted a Tweet showing the Republican candidates listed in order of who spoke the most to who spoke the least.

Rubio not only wracked up the most minutes of response time, but also received a fair amount of accolades on Twitter for his measured demeanor and confidence during the debate.

Fiorina, who gained a fair amount of attention after the november GOP debate, was the second-most prolific speaker. She promised she would, if given the opportunity to come up against Clinton, be a "nightmare" for the secretary of state.