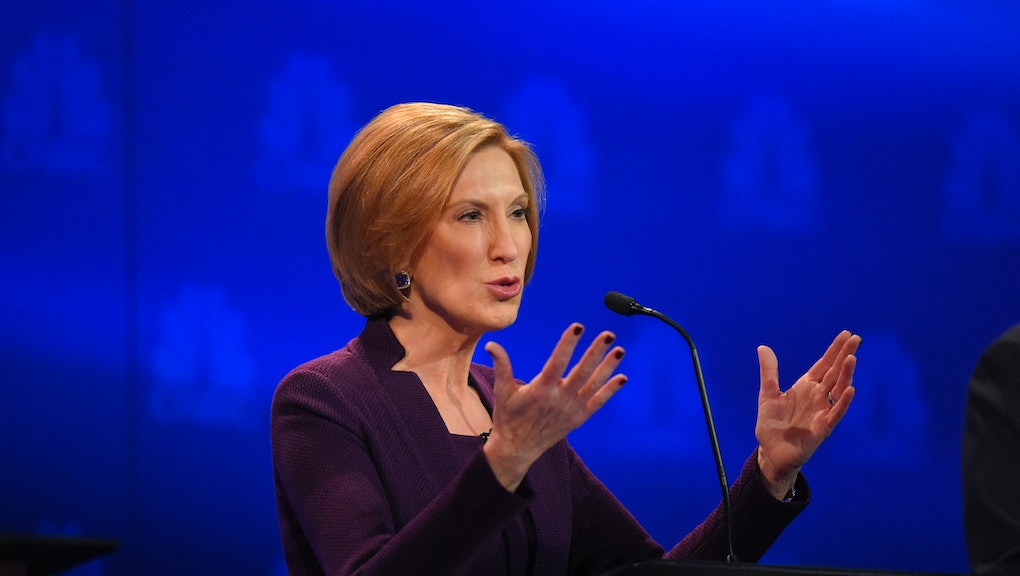 Former Hewlett-Packard CEO Carly Fiorina has a reputation for being flexible with the truth but when she gets into the territory of women's issues, the pants-on-fire alarm goes off the charts.

During the third Republican debate in Boulder, Colorado, that aired on CNBC, Texas Sen. Ted Cruz was asked about the gender wage gap and the fact that women still lag behind men in terms of pay. While Cruz replied with a long-winded response about his experience being raised by a single mother, Fiorina jumped right in with her version of the facts — delivering a direct jab to Clinton.

Fiorina's claim that Clinton's policies put women at a disadvantage is at odds with Clinton's decision to make pay equity and paid maternal leave two of her campaign's central policy issues.

The statistic cited by Fiorina has been thoroughly discredited. She claimed "92% of the jobs lost during Obama's first term belonged to women," a misleading statistic that PolitiFact has previously rated "mostly false."  In fact, the 2008 recession that Fiorina referred to hit men so hard it was labelled a "man-cession."

This isn't Fiorina's first fact-checking mishap. After making unfounded claims about Planned Parenthood during the second Republican debate, even conservative news outlets called her out. When Vox's Sarah Kliff asked Fiorina for her source, the campaign was unable to produce the video she had referred to.

So far in the debate, Fiorina has commanded the most speaking time. While she's getting all this attention, it would be wise to keep it to the facts.