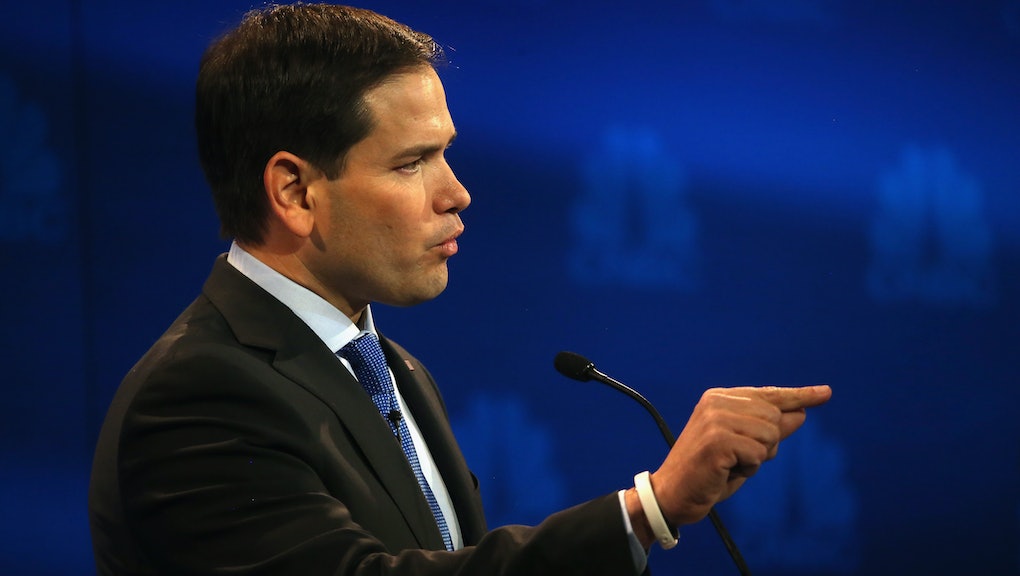 Calling the mainstream media a "super PAC" dedicated to protecting liberals, Rubio told the CNBC moderators the House select committee that interrogated Clinton last week about the deadly 2012 attack on an American outpost in Benghazi, Libya, "exposed" the former secretary of state as a "liar" who misled the American people about the nature of the incident.

During her 11-hour testimony, Rubio said, Clinton "admitted she had sent emails to her family saying, 'Hey, this attack in Benghazi was caused by al-Qaeda-like elements.'"

"Yet the mainstream media is going around saying, 'This was the greatest week in Hillary Clinton's campaign,'" he added. "It was the week she got exposed as a liar."

The committee confronted Clinton with this email exchange, between her and daughter Chelsea from the night of the attack. Under the subject line, "I'm in my office," Clinton told Chelsea, "two of our officers were killed in Benghazi by an Al Qaeda-like group: The Ambassador, whom I handpicked and a young communications officer on temporary duty w a wife and two young children. Very hard day and I fear more of the same tomorrow."

Clinton immediately denied having misled the public, saying she wanted to confirm the information before delivering it to the country.

"When I was speaking to the Egyptian prime minister or in the other two examples you showed, we had been told by [the militant group] Ansar al-Sharia that they took credit for it," Clinton answered. "It wasn't until about 24 more hours later that they retracted taking credit for it," before mockingly apologizing to her questioner, Rep. Jim Jordan (R-Ohio), for telling a story that didn't "fit your narrative."

"Why didn't you just speak plain to the American people?" Jordan asked again.

"I did," Clinton shot back. "If you look at my statement, as opposed to what I was saying to the Egyptian prime minister, I did state clearly. I said it again in more detail the next morning, as did the president."

You can watch Rubio's remarks below: