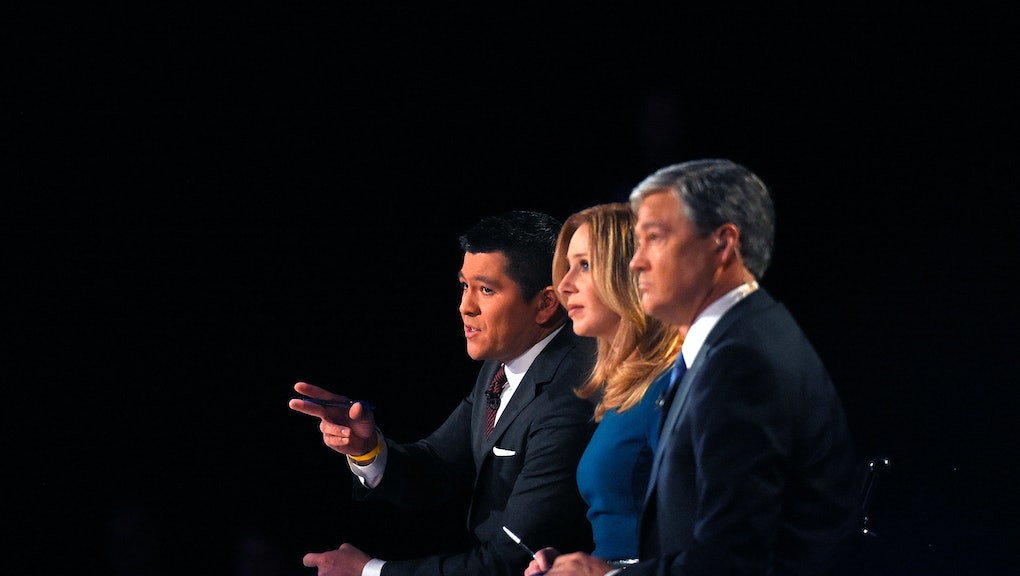 Boulder, Colorado — At the conclusion of CNBC's Republican presidential primary debate on Wednesday night, campaign emails from the press offices of every candidate trumpeted their participant as the night's victor. While the question of who walked away a winner from the University of Colorado Boulder's Coors Event Center might still be a matter of contention, the biggest loser of the night was easy to find: journalists.

The debate, ostensibly organized around the theme of "Your Money, Your Vote," marked a turning point in the Republican race for the White House, as the assembled candidates decided that it was in their political interest to go after "the mainstream media," several hundred representatives of which watched in varying grades of frustration, bewilderment and smug agreement from a filing center only a few hundred feet away.

The debate's moderators, CNBC hosts Carl Quintanilla, Becky Quick and John Harwood, were largely helpless as candidate after candidate dismissed their questions as partisan, contentious or in the service of Democratic front-runner Hillary Clinton. The trio's performance, alternately unfocused and vapid, drew sharp criticism from other political journalists and commentators watching the debate who openly wondered if the moderators knew what they were talking about.

The onslaught began when Sen. Marco Rubio deflected a question over his voting record by questioning the neutrality of the Sun-Sentinel, a major Florida newspaper which on Wednesday called on Rubio to resign over missing Senate votes in order to campaign.

"I read that editorial this morning with a great amusement," he said. "It's actually evidence of the bias that exists in American media today."

Quintanilla asked Sen. Ted Cruz about the budget deal reached by the White House and Republicans in Congress, questioning whether Cruz's opposition to the deal demonstrates that he's "not the kind of problem solver American voters want?"

The Texan senator smelled blood and lashed out. "Let me say something at the outset: The questions that have been asked so far in this debate illustrate why the American people don't trust the media." The crowd erupted in some of the loudest applause of the night.

"This is not a cage match," Cruz continued. "And if you look at the questions: 'Donald Trump, are you a comic book villain? Ben Carson, can you do math? John Kasich, will you insult two people over here? Marco Rubio, why don't you resign? Jeb Bush, why have your numbers fallen?' How about talking about the substantive issues?" As the audience roared, Quintanilla tried in vain to regain control of the conversation but Cruz charged on.

"The contrast with the Democratic debate, where every fawning question from the media was, 'Which of you is more handsome and wise?' ... Nobody watching at home believes that any of these moderators have any intention of voting in a Republican primary. The questions that are being asked shouldn't be trying to get people to tear into each other."

It got worse from there. Later in the debate, Rubio railed against journalists and mainstream media organizations as partisan organs devoted to Clinton's election.

"The Democrats have the ultimate super PAC. They're called the mainstream media," Rubio said before berating journalists who praised Clinton's performance in front of the House Select Committee on Benghazi last Thursday.

"It was the week she got exposed as a liar," Rubio said. "But she has her super PAC helping her out — the American mainstream media."

Gov. Chris Christie of New Jersey, never one to forego a fight, jumped in. "We have ISIS attacking us and we're talking about fantasy football?" Christie said, dismissing a softball question lobbed at former Florida Gov. Jeb Bush. "Let people play. Who cares?"

When Harwood attempted to interrupt Christie's long answer, the pugnacious governor responded, "Do you want to answer, or do you want me to? Even in New Jersey what you're doing is called rude."

Not a new story: The debate's anti-media tone echoed a longstanding American belief that reporters and the companies that employ them are in the bag for the Democratic Party. According to a 2014 Gallup poll, confidence in American media's ability to report "the news fully, accurately, and fairly" has plummeted to all-time low of 40%, with only 27% of Republicans stating that they trust the media. Journalists are frequently seen as less trustworthy and honest than taxi drivers, police officers and even lawyers.

It's a winning strategy for the Republican candidates — few of whom will lose a single vote by bashing journalists. To wit, following the debate, the chairman of the Republican National Committee released a statement railing against the network.

"While I was proud of our candidates and the way they handled tonight's debate, the performance by the CNBC moderators was extremely disappointing and did a disservice to their network, our candidates, and voters," Reince Priebus said. "NBC should be ashamed of how this debate was handled."

At least some in the media filing center felt that the candidates had a point.

"I hate to say it, but I think Cruz is right," a reporter for Breitbart News, a conservative news and opinion website, told Mic. "I'm sick of covering these debates — I feel like I know so much more about the Democratic candidates than the Republican ones. The way these questions are framed are just geared at making them fight."

When reminded that the media didn't pit the candidates against each other — they did, when they signed up run for president — she shrugged. "Well, yeah, but CNBC didn't do y'all any favors. That's for sure."