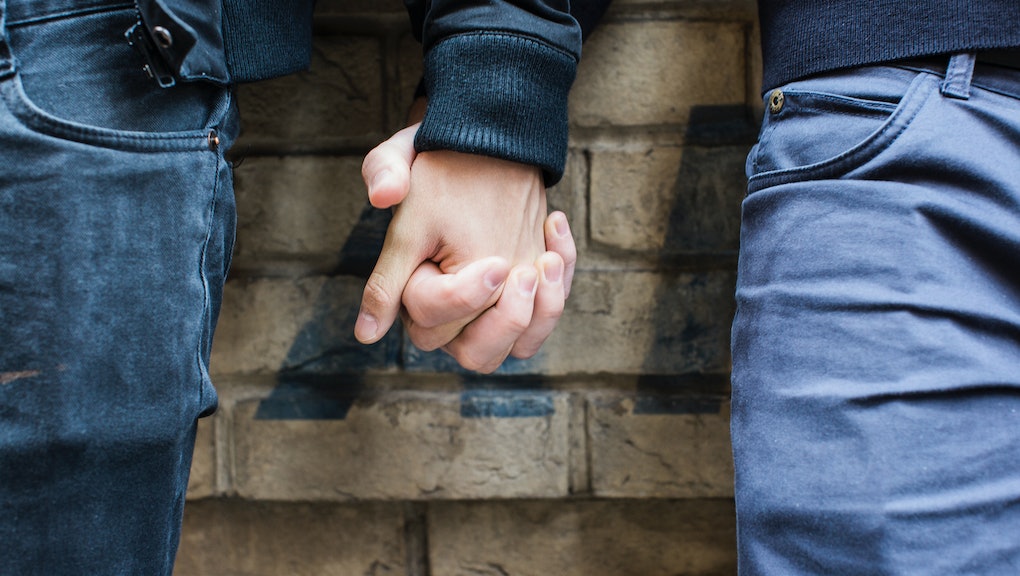 My date and I had settled into our entrées when we started talking about what we do for work. Other than a few awkward pauses during our appetizers, I felt like the date was going well. But that quickly changed when I told him that even though I had just graduated from business school, I was planning to go into LGBT advocacy.

"That's so great. We need more gay activists," he said.

"You're bisexual?" he said, laughing. "So, you like, have vagina cooties."

The biggest dating hurdle of all: There are enough dating hurdles in 2015: online harassment, confusion about what constitutes a date or a hookup, not having enough financial stability to settle down. But however difficult it might be for people to find love in the digital age, it's even harder for bisexuals.

That's due in large part to biphobia, a cultural aversion to bisexuals due to various cultural stereotypes about bisexuality. These myths include the idea that bisexuals are inherently promiscuous, or they're cheaters who are unable to be monogamous.

While bisexual women also face stigma from society, they tend to be more accepted due to how heavily sexualized their identities are. It's OK for women to be attracted to men and women, because most male audiences find so-called "girl-on-girl" action appealing.

Yet bisexual men are viewed with a level of distrust that's less common among bisexual women. That's in part due to the deeply ingrained cultural misconception that a man can't date another man and still be sexually interested in women as well, or that masculinity "is meant to be dominant and to attract femininity," as I've written before. But it's also due to our culture's lack of bisexual male visibility.

In pop culture, there is a profound lack of out-and-proud bisexual male figures. While there is greater visibility for lesbian and gay characters and even some for bisexual women, there are few bisexual men in popular culture — a glaring absence that isn't representative of the LGBT community as a whole, considering that one-third of LGBT men are bisexual, according to the Williams Institute, a think tank on sexual orientation and gender identity law and public policy.

This type of invalidation contributes to the vicious cycle that makes bisexual men less confident and comfortable about dating. "I sometimes wish I was gay or straight so that I didn't have to deal with coming out again and again," Chris*, 24, told Mic.

"People don't even believe me": For many bisexual men, dating quickly becomes more about proving their sexuality than the act of courting itself.

"Many times people don't even believe I'm actually bisexual," Chad*, 29, told Mic. "I could tell them I'm attracted to them until I'm blue in the face and they still won't believe me. I'm talking people I've had sex with and shown romantic interest in still thinking that I'm not really bisexual but that I'm really straight or gay."

Indeed, some gay men worry bisexual men will leave them for a woman, while some straight women worry they will be left for a gay man. "I've never dated a bisexual man because I was very apprehensive to do so," Paul from New York told Mic. "I was very scared I would lose that person to someone of the opposite sex that can offer something I can't."

Since having learned more about bisexuals, Paul said he would likely date a bisexual man: because most bisexual men probably don't have as much sexual experience with other men, Paul said it would be "hot" to teach them a thing or two in bed. "I feel like I would be getting a part of that man that someone else might not have seen or had before," he told Mic.

An identity that's been fetishized: Paul's statement that male bisexuality is "hot" adds another layer of difficulty for bisexual men: They have to deal with their sexual orientation being fetishized, specifically by gay men. For many gay men, bisexual men are a conquest, primarily due to the expectation that bisexual men are more masculine due to their attraction to women.

It's not just gay men who have issues with dating bi guys. Straight women like Amanda*, 27, said she would never date a bisexual man, a decision she chalked up to her "old-fashioned" Southern roots.

"I have neither dated a bisexual man nor would I be interested in the idea," Amanda told Mic. "As a heterosexual female, the inability to choose a gender-specific sexual orientation (heterosexual or homosexual) indicates a potentially larger, deep-rooted issue. Is this person indecisive? Unable to commit? If a man can't commit to a sexuality based on gender roles, how can I expect him to commit to me?"

Fighting troubling stereotypes: Of course, the ideas that Amanda is expressing are inaccurate stereotypes of bisexuals that have been thoroughly debunked. Bisexual individuals aren't indecisive, unable to commit or cheaters just because of their sexuality.

These false ideas of bisexuality have led to the idea that bisexual men are more likely to be HIV positive than men who have sex exclusively with other men or women. In 2014, the University of Pittsburgh's Graduate School of Public Health and Center for LGBT Health Research released a comprehensive study comparing the HIV rates between MSM, MSW and MSMW.

This reputation stems from the early days of the AIDS crisis, when bisexual men were blamed for spreading HIV — then understood to be a "gay disease" — to women.

"I have had women suggest that because I am bisexual, I spread HIV," Khafre Kujichagulia Abif, an Atlanta-based AIDS activist who is HIV positive, told HIV Plus magazine. Some studies have blamed biphobia for the growing bisexual health crisis, as bisexuals are at heightened risk for depression, cancer, obesity and various sexually transmitted infections.

That said, people are starting to talk more openly about bisexual stigma, as well as bisexuality in general. The bisexual health crisis was a big talking point during Bisexual Visibility Week last month, and earlier this week, GLAAD released their annual Where We Are On TV report, which showed a 10% rise in bisexual characters. (The report came with the caveat, however, that "many of these characters still fall into dangerous stereotypes about bisexual people," such as the duplicitous Cyrus Henstridge on E!'s The Royals or the much-maligned Piper on Orange Is the New Black.)

The key to bringing bisexuality into the mainstream is visibility above all else, so people can educate themselves properly on bisexual issues. Hopefully, more education on various types of sexual orientations will help make bisexuality more acceptable in mainstream culture, so that one day, I won't have to explain on a first date that contrary to popular belief, I do not have "vagina cooties."

*Only first names have been used to allow sources to speak freely on private matters.