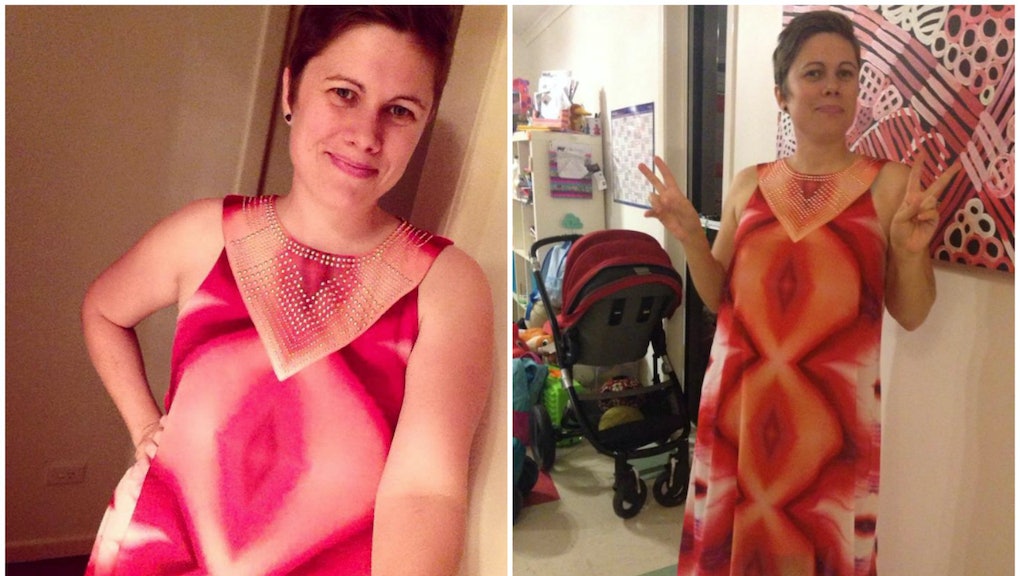 On Sunday, Sam Jockel bought a dress from the Australian department store Myer. It fit! She was thrilled! So like any sensible woman, she tried it on when she got home to show it off to her husband.

He had a startling revelation.

Spoiler: We're talking about vaginas, people. Jockel's husband, cutting right through her glee-filled new purchase, told her that the dress she just bought — and loved — was covered with psychedelic vaginas.

"'The Dress' was a great fit and beautifully made and the color suited me, so it was feeling like a winning day to have found a dress I needed for some upcoming events," Jockel, who runs the blog School Mum, told BuzzFeed. "Once I got home I put it on to show hubby and within half a second he was already laughing. I asked him what the laughing was all about and he said 'It looks like you are covered in giant vaginas!'"

Jockel remained lighthearted about the disturbing revelation, promptly posting several shots of her in the muumuu-like garb. That's when the Internet struck: Soon, School Mum's fans started flocking to Myer in droves to give it a try.

So, did she keep it? Unfortunately, Jockel had to return. Once the discovery was plastered all over the Internet, she figured $219 was a little steep for a dress (that's still for sale) that Georgia O'Keefe would be proud of.

But she did get a ton of new blog followers because of it.

"I have been running the School Mum blog online for nearly five years, and we have over 265,000 followers on Facebook," she told BuzzFeed. "But it took a vagina dress before anyone actually really noticed my face and felt comfortable stopping me in the street for a laugh. The power of the vagina!"

The power of the vagina indeed. As it so happens, vagina wear is pretty in these days, with purses like the Pussy Pouch joining a high-fashion cocktail dress and even iPhone sleeves in celebrating the more intimate parts of a woman. Hey, there's no shame in anatomy — just ask the buyers of this kickass uterus sweatshirt.