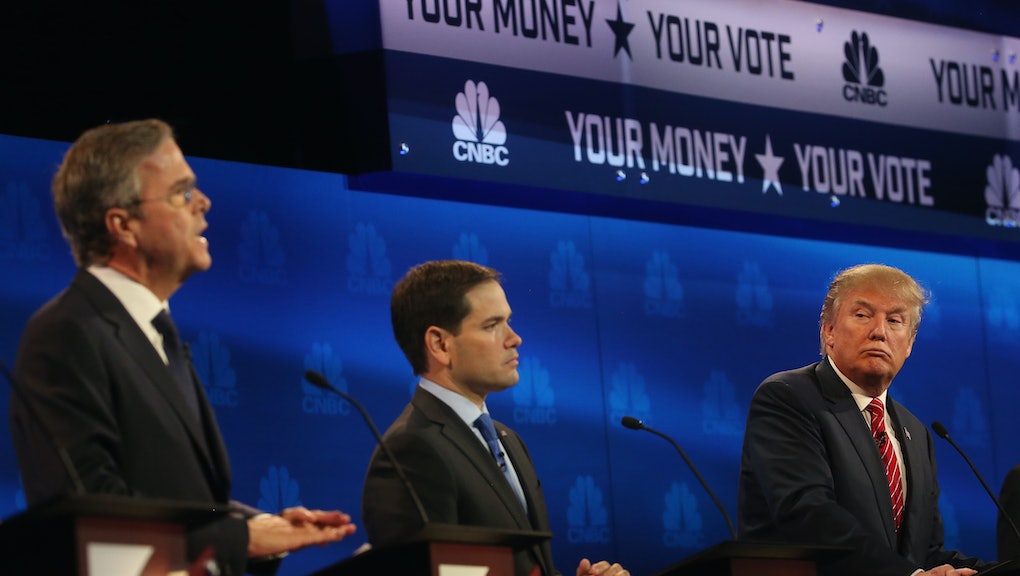 The media and voters don't always see eye-to-eye on the results of high-stakes political debates.

But following Wednesday night's CNBC-moderated showdown in Boulder, Colorado, there seems to be a rare consensus, at least on the question of how Florida Sen. Marco Rubio fared. According to a survey conducted for Mic by Google Consumer Surveys shortly after the debate concluded, Donald Trump and Rubio delivered the most commanding performances of the night, while former Florida Gov. Jeb Bush tanked.

The third Republican debate was crucial for Bush, who many believed needed to quickly and emphatically reverse his campaign's "death spiral." For the front-runners in the race — Trump and Dr. Ben Carson — the debate also offered the opportunity to lock in their impressive poll numbers.

The survey included respondents who watched some or all of the debate and identified as registered Republicans. Viewers were most impressed by Trump (25%) and Rubio (23%), with Carson finishing third at 16%. Bush, who entered this campaign with buckets of money and the support of large swaths of the party establishment, cratered again. Only 3% of those surveyed said they thought he "won" the debate.

Bush blues: Bush and Rubio provided the most compelling exchange of the evening. During his time as governor in Florida, Bush mentored Rubio, then a state senator, developing a personal and professional relationship both men have sworn by for years. But as the race has tightened — Rubio rising, Bush on the decline — their campaigns have dispatched with the niceties.

On Wednesday night, Bush called out Rubio for missing Senate votes, telling his one-time protege to "resign" if he couldn't be bothered to show up for work. Rubio, however, was ready. He shot back that Bush was a hypocrite for not criticizing Sen. John McCain (R-Ariz.), who had done about the same in 2008, then offered an acid diagnosis of his rival's motives.

"The only reason you're doing it now is because we're running for the same position," Rubio said. "Someone convinced you attacking me is going to help you."

So how did it all play with registered Republicans? As indicated in the chart below, Republican viewers clearly gave the upper hand to Rubio. Nearly half of Republican viewers said they came away from the debate with a more favorable view of Rubio. For Bush, 49% said watching him in the debate made them like him even less:

State of the race: In the aftermath of the debate, the dynamics of the campaign field came into stark relief: Rubio is ascendant. Bush is in freefall. Sen. Ted Cruz (R-Texas), who received some of the loudest applause of the night when he laid into the mainstream media, is making a well-funded bid for Trump and Carson voters who may be growing disaffected with the leading outsiders.

Whether Rubio's well-received debate showing is reflected in the polls — particularly in Iowa and New Hampshire — remains to be seen. But based on a snapshot of the reaction of Republican debate-watchers, there's a good chance it might.