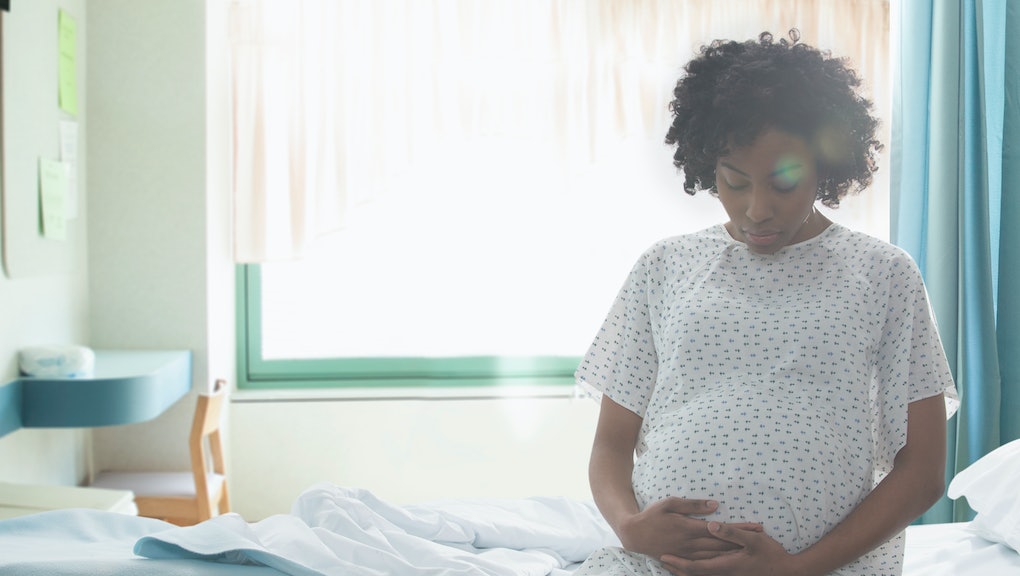 What Can't Women Do When They're Pregnant? 11 Pregnancy Myths, Finally Explained

Pregnant women face extreme scrutiny for pretty much every decision they make: their eating habits, their exercise regimen, the vitamins they take. No choice is safe from judgment, especially from other mothers who are full of advice about what women can and can't do while they're pregnant.

Case in point: The huge debate about whether it's OK to drink alcohol while you have a bun in your oven. While some studies have determined that it's OK for women to have a glass of wine per week during their pregnancy, a new clinical report issued by the American Academy of Pediatrics said that women should not consume any alcohol at all to prevent the possibility of the baby developing fetal alcohol syndrome.

The as-yet undecided controversy over whether it's OK for a woman to have the occasional glass of pinot grigio during her pregnancy points to how many myths and misconceptions there are about what a woman can and can't do while pregnant. (It also raises the question of why so many people have strong opinions about what women should be doing with their bodies to begin with.)

Since each pregnancy is unique, women should always consult with their own doctor to determine what's best for them. But because there is so much confusion about whether women should, say, eat sushi during a pregnancy, Mic consulted with Dr. Marcela Smid, a third-year fellow in maternal fetal medicine at the University of North Carolina – Chapel Hill, to set the record straight and get to the bottom of some common pregnancy myths.

Myth: You can't have sex.

Though many women worry that rigorous exercise might jostle the baby and somehow hurt it, Smid says exercising while pregnant is actually recommended: Women are advised to exercise for 30 minutes on most, if not all, days. "Exercise improves back pain, may help to prevent or treat gestational diabetes, improves mood, improves muscle tone and improves sleep," says Smid.

That said, contact sports and activities like skiing and scuba diving should be avoided. Instead, it's better to stick to "safe" exercises like walking, swimming, cycling and aerobics.

Thank goodness. Because of a parasite in cat feces called toxoplasmosis, pregnant women aren't advised to come into contact with the litter box. Toxoplasmosis is transmittable to humans and can cause severe birth defects.

Though Smid says it's unlikely that an exclusively indoor cat will transmit the parasite, it's still advised to avoid direct contact with cat feces, preferably by having another person change the litter. If there is no alternative, a pregnant woman should always wear gloves and wash her hands thoroughly afterwards.

Though it might be annoying to fit your baby bump into those teeny-tiny airplane seats, it's definitely OK to travel during pregnancy. However, Smid says you should discuss your travel plans with your health care provider, because their advice might differ depending on the length of your trip, the mode of transportation and your destination. And if you're traveling overseas, be sure to inquire about any necessary vaccines and whether or not they're recommended during pregnancy.

As mentioned above, the new standard from the American Academy of Pediatrics is to avoid all alcohol during pregnancy, even if it's just one glass of wine every now and then. Because there's no known "safe" amount of alcohol, Smid said, the American Congress of Obstetricians and Gynecologists' opinion is that alcohol exposure during pregnancy is not recommended. Even moderate alcohol use (one alcoholic drink per day) can potentially cause lifelong learning and behavioral problems in the child.

Myth: You can't use household cleaners.

While products like oven cleaners should be avoided due to the risk of breathing in the fumes, most household cleaning products are safe to use during pregnancy if used in well-ventilated areas and while wearing rubber gloves, Smid said. Unfortunately, you have no excuse to stop cleaning the house while you're waiting for the baby to arrive.

According to Smid, eating fish can yield legitimate benefits for the fetus, such as aiding in brain development, because fish are rich in fatty acids. However, there are concerns in the medical community about pregnant women eating raw fish, or fish with potentially unsafe levels of mercury and parasitic infections. The CDC recommends that pregnant women only eat fish cooked to at least 145 degrees Fahrenheit, and the FDA recommends that pregnant women limit consumption of fish to eight to 12 ounces of low-mercury fish a week.

Avoid shark, king mackerel, tilefish and swordfish, all of which have high mercury levels. (Sorry, sushi lovers: California rolls are also out of the question.)

A long, relaxing stint in the sauna might seem like a good way for a pregnant woman to unwind, but using a hot tub or sauna actually poses some serious health risks. According to Smid, in the first trimester, sauna use is associated with an increased risk of neural tube defects such as spina bifida, but how much sauna time is needed to cause damage to the fetus is still unknown.

Myth: You can't paint your nails.

Who says you have to sacrifice beauty for your as-yet-unborn baby? Smid said that dyeing your hair a few times during pregnancy or polishing your nails is generally safe but you should do so in well-ventilated areas because the fumes might make you nauseous.

Gardening during pregnancy is generally considered to be safe, Smid said. However, pregnant women should take certain precautions before digging in the dirt, such as wearing gloves and thoroughly washing their hands in order to prevent exposure to toxoplasmosis (yes, that's the parasite found in cat feces).

While taking a higher dose of aspirin (325 mg) is not recommended, a low-dose aspirin (81 mg) is, in fact, recommended for women with various blood clotting disorders to prevent pre-eclampsia, a pregnancy-related condition that causes high blood pressure. Smid said you should consult your doctor before taking any medication while pregnant — even vitamins.