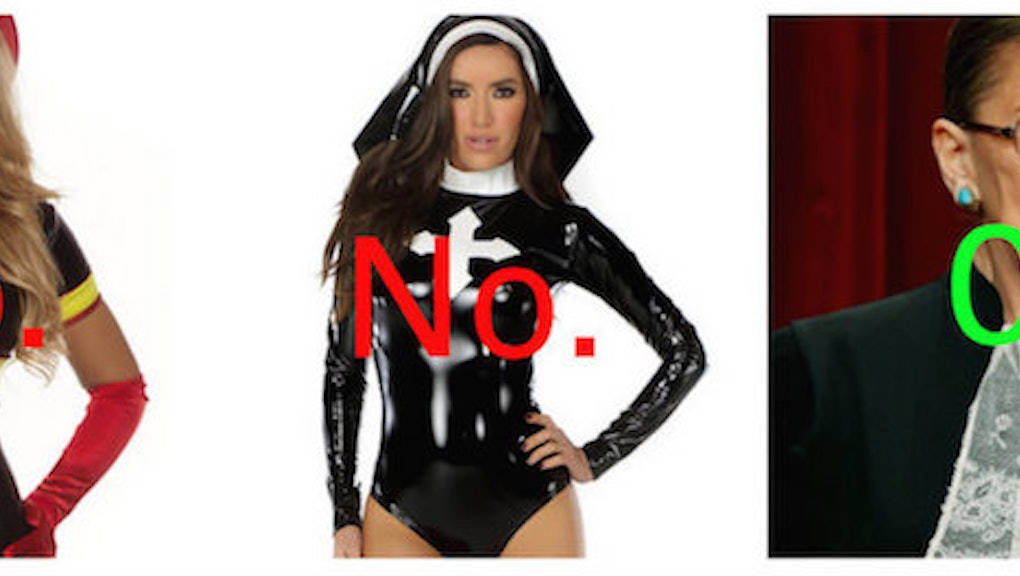 Yes, it's Halloween already, and you've got Facebook party invites up the wazoo, but fresh out of ideas for the right costume. Don't worry, we've got your back for a few get-ups you can slap together in one crafty afternoon catching up on Empire and Agent Carter.

A note: It should go without saying, but blackface is not OK in any of these situations. Like seriously, put down your roommate's cocoa shade of Maybelline. Also, you can add a "sexy" to any of these costumes, and if anyone questions it, shout at them, "I'm hot and sexy on my own damn terms, isn't that enough?!"

This one is for you and all your lazy feminist friends who are too busy smashing the patriarchy in their daily lives to have time for putting together a costume, obviously. Get a 10-pack of T-shirts, draw some numbers on (dibs on 69!), and walk around like the champions you are.

This is actually a two-person costume. The construction involves cutting out huge "feminist" letters out of poster board and affixing it to a black diorama board. One person wears their most amazing outfit while the other holds up the sign and follows the star around. Beyoncé hair-blowing fans are optional, since that would require a third person.

This one's pretty obvious. Staple some lace to a robe, put your hair in a bun, throw on those glasses, a crown (easily accessible at Burger King) and lean to the left. Bonus points if you bring a book with you so you can throw it at law-challenging haters (that's what she does as a Supreme Court justice, right?).

This one depends on how gutsy you want to get. Yes, you can wear Newsome's simple black shirt and pants, a helmet and use duct tape to stand in for her climbing harness. If you really want to go all out, of course, grab a Confederate battle flag... but know that we might write about you if things start to look problematic on your Instagram.

Hey, contraception is scary to some people. Grab a hula-hoop and get creative with attaching it to yourself somehow. Or just stand around at your costume party hula-hooping. Either way, you brought a fun prop to a party. Another alternative is to take a page from Lena Dunham's book and go as a Planned Parenthood doctor.

Gandhi spent all that time training to run the London Marathon only to find race day was also day one of her period. Some of us would rather hide from the world on day one, let alone run a marathon, but she shared her incredible story of rejecting the requisite wad of cootchie cotton for 26.2 miles. Show solidarity with her by adding some red Kool-Aid to an old pair of running tights, and safety pinning a racing number to your T-shirt.

The real deal is just not wearing a top, of course. If you're not quite ready to show the world your boobs, but you get what the Free the Nipple people are all about, this is the one for you. Find a T-shirt that is as close as you can get to your skin tone, grab a Sharpee, and draw a facsimile of the girls. Be as honest (or as creative) as you want in your artistic rendering. Just don't be this ad. It's stupid.

8. An unfortunate display of white feminism

What you need: A white T-shirt plus iron-on transfer paper can take you pretty far, but this one is guaranteed to be a winner at probably 30% of all feminist-focused Halloween costume contests. Pretty good odds, right?

No costume needed, because it's everywhere — spooooooooky!