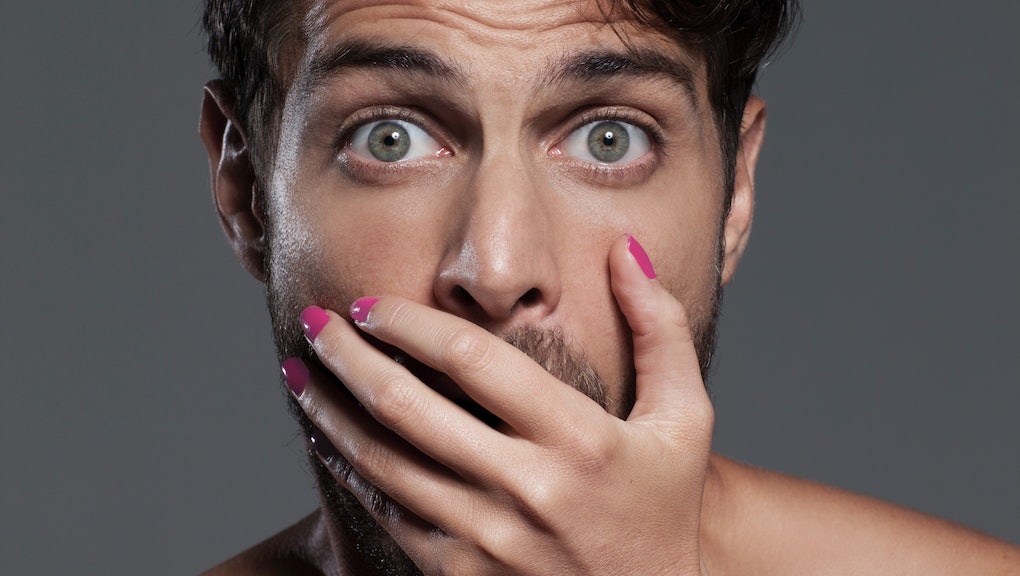 Sticks and stones may break bones, but this word can definitely hurt people. It starts with "F" and rhymes with maggot, and fair warning, you're about to read it a lot.

By Thursday night, just as the clock was ticking toward Friday, Twitter users had uttered this six-letter slur almost 7,000 times.

The top of NoHomophobes.com reads, "Homophobic language isn't meant to be hurtful, but how often do we use it without thinking?" But what if the language we use is actually intentional, and the intent is not to harm?

Mic spoke to gay men who use one of the words people are taught never to say in polite company about why they use it, who's allowed to use it and whether people's perception of the word is changing.

Raul Huezo wants to reclaim the word. Huezo, a 29-year-old gay man, uses the word to greet his roommate, who is also gay. When he does CrossFit, he and his roommate keep each other going by repeating "OK, girl, fag out, fag out," instead of "Don't quit on me now," or the also-controversial "man up."

"If that's the worst word you can throw at me and I'm comfortable with it, you have to think of something more creative," Huezo told Mic. "You can't hurt me by using that word."

When his best friend and cousins asked him not use the word around them, he agreed. For Huezo, part of his cavalier use of the word includes a recognition of the negative hold it has over others. He believes it's a matter of respect, he said.

The first time Huezo remembers having the word used against him happened when he was 18, walking down a main road in Ithaca, New York, at 2 a.m., with a group of fellow people of color. Out of a car window came the shouts of the "faggot" and "nigger."

Huezo told Mic he believes straight men use the word out of a fear of intimacy. "It's gone from a handshake to a high five to a fist bump," he said. "There's less and less contact between straight men, because they might be perceived as gay. Maybe through that fear they use some strong, hateful language just to be like, 'I'm not that.'"

In an interview with NPR, Randall Kennedy, a law professor at Harvard University and author of Nigger: The Strange Career of a Troublesome Word, said, "'Faggot' can be used as viciously or facetiously or ironically or tenderly as 'nigger.' Obviously they have different histories. But they are each verbal symbols and can be deployed or revalued or reinterpreted like any other symbol including the Confederate flag or the swastika."

Yes, using the word is presumptively bad, but, according to Kennedy, there can be other contexts. "Context is all important," he told NPR.

The complicated reality of masculinity: Brandyn Gallagher, a 27-year-old transgender man, told Mic he uses "faggot" in the context of his own identity and attraction.

"[It's] about the ability to express my masculinity and my attraction to masculinity in a single word without the homophobic implications of toxic masculinity that are so intrinsic to the definition of manhood in America," Gallagher said.

Gallagher remembers well the many times he was called "faggot." Before his transition, when he was female-presenting, Gallagher identified as a lesbian. Many of his high school girlfriends could tell he was less-than-interested in operating as a lesbian, and a few asked him if he was a gay man — just not in those words.

"To be called 'a faggot with D cups and long hair' was, in hindsight, very telling," Gallagher said.

While identifying as a lesbian, he dated a few straight men who later came out as gay. Gallagher realized a pattern: He wasn't a lesbian, he wasn't a straight woman, but he was falling in love with gay men. In many ways, that's how he arrived at his current gender identity of "faggot," he said. When a form presents Gallagher with a blank space for his gender identity, that's the word he uses to fill it.

"People who are all about inclusivity, all of a sudden they're like, 'You can't use that word,' and it's like, 'You just told me I can't self-identify, what the fuck?'" Gallagher said.

Gallagher has come a long way with the word. One day during gym class in his senior year of high school, which he spent at a different institution than the previous three years, Gallagher was in the weight room, which had only two entrances. Two classmates stood in the doorways and began speaking openly about "faggots" and "dykes" not belonging in their school and wanting to "clean up the school" and "take it back for themselves." One of them picked up a weight-lifting pole and began to swing it back and forth while encroaching on Gallagher's space.

Gallagher was able to get away and get to the gym teacher, who was outside. When Gallagher told him what happened, Gallagher said the gym teacher responded, "What do you want me to do about it? He's right. Faggots and dykes don't belong in this school."

When Gallagher told the principal, the principal said Gallagher should've come to the office sooner. Gallagher responded, "If I did that, I'd be in your office every hour."

Though Gallagher is transgender, he feels comfortable using "faggot," but not the common slur for transgender people. "No one ever calls me that," he said. "People call me 'faggot.'"

It's all about the performance. Pablo Rodriguez-Arbolay Jr., 31, remembers being called the word in junior high school, at about age 11 or 12. The culprit was a macho 13-year-old who used it to hurt him.

"It was really tied into my failure to go ahead and present myself as masculine or male," Rodriguez-Arbolay told Mic.

Ever since then, according to Rodriguez-Arbolay, he's thought of the word as a kind of action or performance. These actions "call attention to the absurdity of ways that we understand and embody sexuality and gender," Rodriguez-Arbolay said. Acting as one is no accident; it requires craft.

"Your craft as a faggot is one that ties into developing survival strategies in some ways," he told Mic. And there's a lot, Rodriguez-Arbolay said, that queers have to survive. First among them is the damaging reality of macho masculinity. He said that embracing the word is an act "trying to destabilize [masculinity] in ways that call attention to how constructed it is. It's nothing that's natural or fixed."

However, most importantly, he believes the word and its associated actions are a form of resistance against that which keeps gay men marginalized. In his words, he wants to see a time when "faggot" isn't being used derogatorily and "it's being used as a way to build bridges or strike up community."

The disconnect of "faggot": In 2007, as a sophomore at Vassar College in New York's Hudson Valley, Jonathan Bannigan designed a T-shirt with the word "faggot" across the chest in pink and purple letters. He wore it to a local Chili's.

"People were just aghast," Bannigan told Mic. "I wanted to act out. I'm impatient for the process [of people accepting 'faggot'] to finish."

The very first time he heard it, in fifth grade, he knew it was a description of what he was.

He thought, "'What is this word? I think it's the key to something about myself that I don't quite understand yet but I'm very interested in.' It was sort of the word that propelled me to an understanding of my gay identity," he said.

Bannigan uses the word to talk about many types of gay people: people who are out, people who are closeted and himself. "If I'm drooling over a guy or doing something stereotypically faggish, I'll just call myself a 'dumb faggot,' like, stop," he said.

Bannigan said he wishes more people would use the word during sexual humiliation, though no one has attempted to with him. "I think that would be really hot," Bannigan said. "So many people think that word is off-limits or out of bounds. I'm like, no, it's very sexually charged, it's very useful in that way."

Despite straight men's persistence in using it as a slur, Bannigan said he sees the needle moving on the term. But it has to start with each individual seeing that the term is not scary. Bannigan said the word is a "bogeyman" in the closet that gay men have to confront.

"You realize at some point that the faggot that everyone is talking about is you!" he said. "You're their worst fear and you're not that scary."

Does that make it OK to use? Those who spoke to Mic were mixed about whether it was OK for others to use the word, though all agreed that one had to come to it with a level of respect.

Since NoHomophobes.com started tracking "faggot" and other common anti-LGBT terms on Twitter in July 2012, there have been more than 33 million uses of the word. Though we haven't seen all the tweets, it's easy to see from NoHomophobe's live feed that they're not all positive.

"I'm not completely blind to the fact that it's still a really strong word," Huezo said. As such, when his friends ask him not to use it, he agrees. "I respect them so much that I don't want to make them uncomfortable," he said.

Bannigan said he hopes to see the word move from a term of "straight derision" to an empowered term. "That's where we get to go if we just let the word be free instead of restricting its use," he said.

Gallagher said intent behind the word is key. "There's many instances where the intent says, 'I'm going to kill you," but the word doesn't," he said.

"I feel like there's nothing wrong with the word itself," Gallagher said, "but when someone is swinging a 3-foot metal pole when they're saying it, I feel uncomfortable with the hatred, not the actual word."