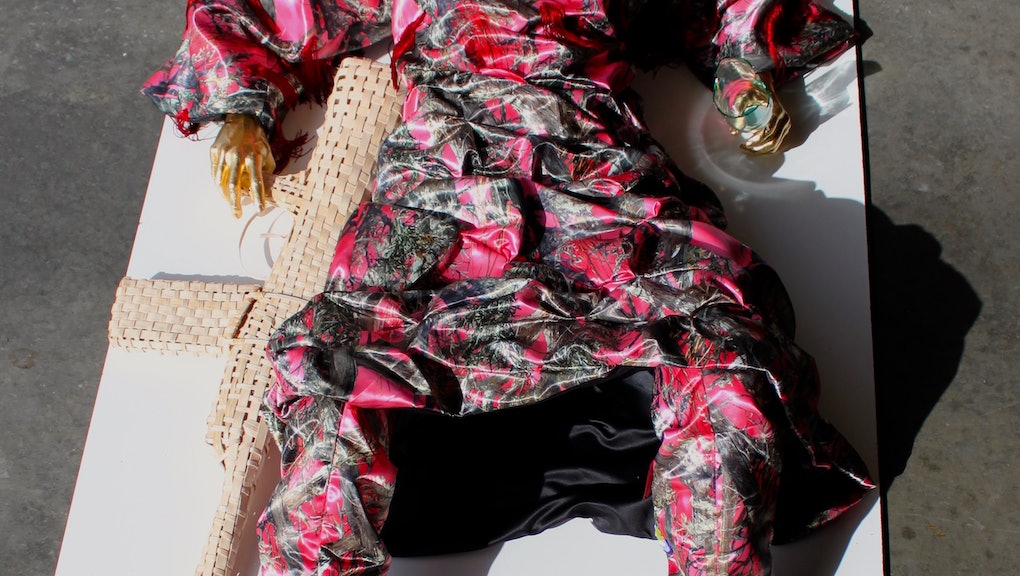 The United States is often described as a melting pot, a mosaic of individual voices. When it comes to the complex relationship between Native and U.S. history and contemporary culture, however, that doesn't feel accurate. It seems like Native peoples were and continue to be seen as a homogenous group rather than a diverse collection of individuals and communities.

Luckily, a different picture is beginning to emerge. Not only are Native issues saturating the media, individual Native voices are being heard more loudly. Some of the loudest and loveliest voices are those of artists.

Johnson, who is Mohawk and Blackfoot, is a multidisciplinary artist whose work feels simultaneously familiar and distinct, both approachable and demanding. Her work is full of subtleties, allusions and challenges that invite the viewer into deeper, denser conversations about social camouflage and protection, community and humans' relationship with land.

This can be seen in her work, which often features natural and organic elements, like fur and shells, as well as familiar iconography portrayed in unconventional media. One of the most powerful messages in her art has to do with the complex relationship between U.S. and Native history.

"The idea of America didn't include Onkwehonwe (Indigenous people) or non-white/non-male people until relatively recently," Johnson told Mic. "My work explores camouflage in cultural terms, how we identify, protect and hide ourselves; and how we are identified, hidden and threatened by others ... the fear of predation exists for all animals, [and] people are a kind of animal.

"I work from my perspective as mixed, descending from Onkwehonwe and settlers, so I am exploring my experience and learning about where I come from as well."

Galanin, who is Tlingit and Aleut, celebrates his contemporary art education with his awareness of traditional (also known as customary) practices in his multimedia art and music. He holds his individuality and his culture high, developing a singular, passionate, autonomous voice.

"Nothing about what I do is a new perspective on Americanness," Galanin told Mic about how his work reflected his perspective on what it means to be American. His work, he said, "comes from a place that has known 'America' before 'America' decided to call this land 'America.'"

In unique ways, his art rejects the so-called "settler" narrative. "To exist and offer works that speak from our own indigenous perspective is revolutionary when the institution is created to teach this perspective as a cliff note. Sovereign Indigenous creativity is power," Galanin said.

Hyde, who is Onondaga and Nez Perce, is a multimedia painter and visual artist whose work is as multidimensional as the concepts he explores. Hyde's work simultaneously acknowledges and rejects the stereotypes that are often associated with so-called "Indian artists."

Hyde's work has echoes of street art as well as graphic design, fantastic colors and an almost-playful surrealism. However, his perspective on his experience as a Native in America, or a Native artist, isn't playful or surreal at all.

"I'm still holding up a mirror to popular society but I'm also not where I want to be yet — I have my eye on bigger venues and bigger conversations nationally," Hyde told the Santa Fe Reporter. "By sort of being persistent, I've earned a place in the contemporary Native art scene, whatever that is or wherever it exists outside of Santa Fe. It's one thing to be invited to the dinner, but it's another thing to hold your place at the table."

Henriquez, who is Maya and Nahua, has a distinctive visual voice expressed primarily on city streets. As a student of street art and graffiti culture, his unique perspective on Native and mainstream U.S. creative expression is especially compelling. Graffiti is deeply tied to New York City's urban environment, especially so in the '70s.

This muralist, street artist and clothing designer works primarily in Los Angeles, but his recent project in collaboration with the Minneapolis American Indian Center will be his largest.

Like so many American street artists, Henriquez and his work both reflect the passion and devotion to community. "L.A. is full of art, crime, justice, abuse and many other things like any other city, but this is where we live," he wrote on Facebook. "So make it a beautiful place!"

This questioning, reframing and even satirization of identity is essential to her work. Her commentary on Native rights and the perception that Native peoples are seen as a "people of the past," especially with progress.

"I use humor and wit as a way to break down the complexities of Native and U.S. history," Red Star told Mic. "I am able to make sense and plunge into the heart of the matter without feeling defeated before I even get a chance to process or experience. This approach also allows my viewers a gateway to approach some of the difficult subjects I want to discuss through my work."

Her work is beguiling, but don't be lulled by how attractive it is — it's deeply developed and deeply empathetic.

"The Native experience is a human experience in which everyone can relate. It is not just my history but your history, and together it is our history," she said.

Wilson, a Diné photographer who lived in the Navajo Nation, deals with a complicated issue: how cultural identity can be imposed rather than developed, defined through the lens of another.

Like Red Star, Wilson is also interested in how Native peoples are seen as a people of the past.

One of his most renowned projects, the Critical Indigenous Photographic Exchange, questions and expands upon the image of Native and Indigenous people popularized by photographer Edward Curtis. Wilson notes that Curtis' images are part of what makes Native people "frozen in time," he said in his artist's statement, which was adapted with permission for Mic.

Wilson's photographs "intend to resume the documentary mission of Curtis from the standpoint of a 21st century indigenous, trans-customary, cultural practitioner," according to his artist's statement. "I want to supplant Curtis' Settler gaze and the remarkable body of ethnographic material he compiled with a contemporary vision of Native North America ... These alone — rather than the old paradigm of assimilation — can form the basis for a reimagined vision of who we are as Native people."

Slick, who is Sauk, Fox and Winnebago, works mostly in monochromatic shades and shadows, like the moments before you open your eyes. His paintings, books and prints all share a kind of transience and elusiveness that draw the viewer close but not overwhelmingly close to the stories he tells.

Slick, like Red Star and Wilson, also is interested in this trapped-in-history understanding of Native peoples, in large part due to Curtis' images. These photographs, he told Mic, were part of a larger historical tragedy wherein Natives were placed "in a single grand narrative of history and representation." This sense of history, and the way that it influences the present, is central in Slick's work.

Slick said he was inspired by the "laughter of the coyote, the eternal trickster and ultimate survivor, saturated and filled our daily lives."

"His laughter is irreverent, and doesn't acknowledge the scale of the master narrative," Slick said. "It echoed through the lecture halls of histories and it was so powerful and it was so distracting that I forgot my place in linear time, and now I work from an untraceable present."

Longfish, a retired Seneca and Tuscarora painter, worked in primarily modernist and politically charged modes. His artwork is credited for leading the Native art movement and the emergence of Native contemporary artists. In his works, he questions the way we define our identity, interrogating those complex political, social, historical and psychological underpinnings.

"The more we are able to own our religious, spiritual, and survival information, and even language, the less we can be controlled," Longfish said in an exhibition statement with Molly McGlennen. "The greatest lesson we can learn is that we can bring our spirituality and warrior information from the past and use it in the present and see that it still works."

Jacobs, a Mohawk recipient of the Harpo Foundation's prestigious Native American Residency Fellowship, is one of the only artists on this list who works almost exclusively in one style: abstract metal sculpture. Her works are emotive and sharp, edged with knowledge and heavy with history — but they're not violent or threatening.

She uses contemporary alloyed materials, including steel and pewter, to question how cultures adapt to the art world, Jacobs told Mic. This use of steel is particularly layered with meaning; it references not only strength and resistance, but the weight of culture and the famed Mohawk Ironworkers.

When asked about the way her work reflects the relationship between Natives and the United States, Jacobs said, "There is such a complex relationship between Natives and the U.S. and I think that for survival we have to figure out how to adapt to a contemporary world without losing the essence of culture and meaning. This is one of the major ideas that I am exploring in my work."

Begay, Diné, is one of the most established artists on this list. He paints lyrical, pointilistic works, the dots of which "repeat like the words of a Navajo prayer," as described on his gallery's website.

Begay's work is widely accessible, and in some ways, it's even familiar. It has a gorgeously Impressionistic, even Expressionistic, sensibility. That said, its originality doesn't suffer from this comparison — rather, its beauty is enhanced.

That said, there are some darker historical shadows in his work. In Begay's biography, he has said he survived boarding school because he was able to draw on cultural and spiritual strength, and retreat into his drawings.

"'Arts save lives' has been my mantra ever since," Begay wrote. "Some people did not survive like me. They are walking traumas of my generation."

Kelliher-Combs is a Nome mixed-media painter and sculptor whose work is intensely personal and intimate. In it, she uses both organic and synthetic materials, creating abstract works that call to mind hair, skin and teeth that remind the viewer not only of the things that make us unique, but that we share.

"Through mixed media painting and sculpture I offer a chronicle of the ongoing struggle for self-definition and identity in the Alaskan context," Kelliher-Combs said in her artist's statement.