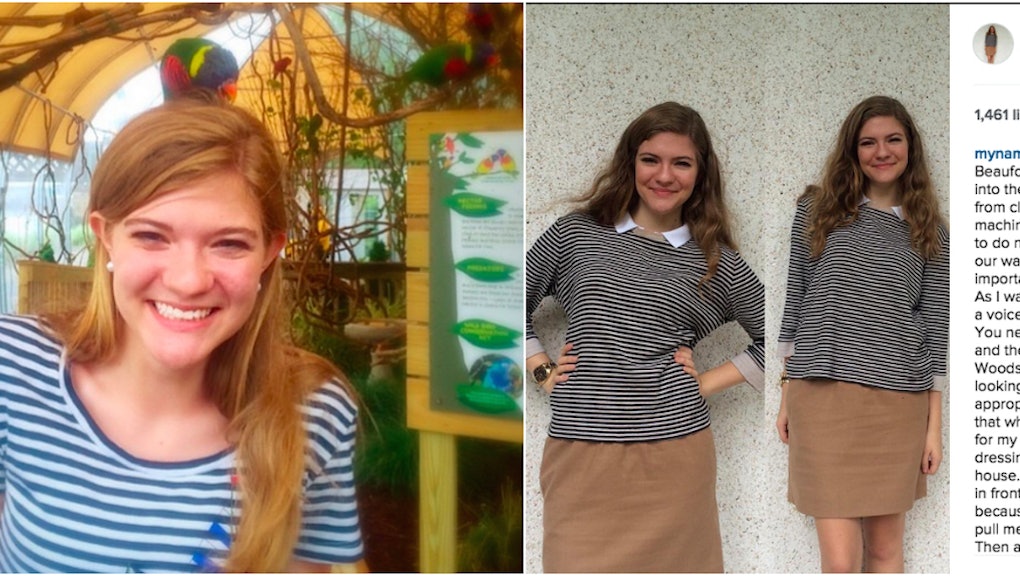 This Outfit Almost Got This Female Student Sent Home From School

In theory, high school dress codes are supposed to establish a set of ground rules for an appropriate way to dress. In practice, this often means teenage girls are subject to subjective standards that sexualize their bodies as too "provocative."

And more and more teen girls aren't standing for it. Seventeen-year-old Carey Burgess from South Carolina is the latest outspoken student to call out what she sees as unfair treatment by a Beaufort High School teacher who reportedly told her, "Your skirt is too short. You need to go to in-school suspension and then go home."

Here's what Burgess was reportedly wearing:

It was a particularly jarring incident for Burgess, who is an all-around star student at school, is the student body president, according to her Instagram, and hasn't had issues with her outfit at school before. "I have worn the same skirt at least dozen times and have never had any trouble with it," she told BuzzFeed.

"So maybe I am in the wrong," she wrote. "Maybe our society isn't yet advanced enough to handle 3 inches of my thigh. This is a patriarchal society and I am a woman. I have to be kept in my place, or I may do something that is so rarely seen in Beaufort High School — learn."

She added, with biting sarcasm, that her school's strict dress code for girls has thankfully steered her away from "hard drugs ... strip clubs and sugar daddies."

She wraps on an empowering note — and calls out her teachers. "Yes, I am a woman. I am woman with thighs, a butt, and a brain," she wrote. "I am bigger than Beaufort High School. All of us are. Maybe instead of worrying about my skirt, Beaufort High should take notice of its incompetent employees, and sexist leaders."

Mic has reached out to Burgess and the principal of Beaufort High School for comment.

Policing how girls dress in school: Burgess took a strong tone (and has since apologized via Facebook for vilifying all of the teachers as a group). But her anger echoes that of dozens of other teen girls who have faced shaming, suspension or guilt from schools for violating (or "violating") dress codes.

Like Burgess, these women haven't taken to it quietly but instead have shared their experiences on social media, helping create viral stories and public backlash against school dress codes, which they say sexualize them by casting women's bodies as potential provocations and unfairly target them more than boys.

Some have created in-school campaigns, such as the students at another South Carolina school who started wearing the letter A, in reference to The Scarlet Letter. Others have organized social media campaigns like Crop Top Day, where students posted photos of themselves in cropped tops after a school principal told one student her trendy top looked like a sports bra.

In Burgess' case, the item in question was a skirt, not cleavage or a crop top — and she happens to be a star student and leader (something that shouldn't matter for how students are targeted by school policies). Burgess eventually met with the school principal and wasn't suspended. In fact, the principal told the Beaufort Gazette that Burgess' outfit was within school rules.