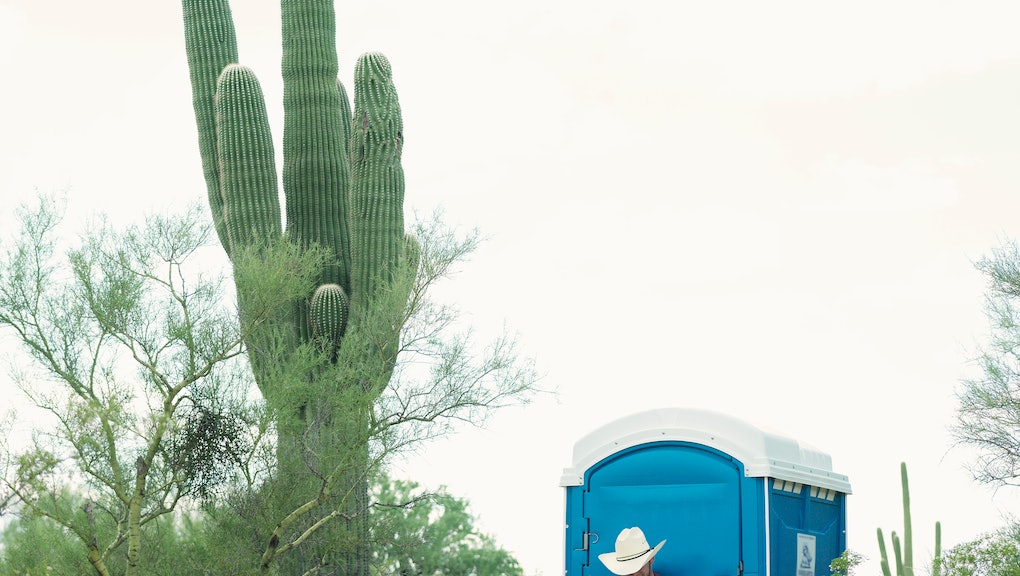 California's Solution to Its Water Crisis Is Full of Crap

California is in the middle of a historic drought. January was the driest month on record since the state began keeping records in 1895; as of last April, the state's snowpack, which accounts for one-third of its water supply, was 5% of what it usually is; the state has enforced rigorous water restrictions; people are even fighting over almonds because of their alleged rabid thirstiness.

Now, some California residents may have to drink poop water because of it.

Just kidding — sort of. The state is considering implementing a "toilet to tap" program, and it's exactly what it sounds like: purifying sewage water until it becomes clean enough to drink.

CNBC reports that the Metropolitan Water District, which imports the most water in Southern California, is thinking seriously about using the process in order to make up for the drought's devastation.

"We're thinking it would serve Los Angeles County, Orange County and potentially San Bernardino County," Debra Man, assistant general manager and COO of the water district, told CNBC. "We're talking about a regional program and it could afford us some cost efficiencies because of the economies of scale." The program would provide water to about 19 million people.

"Right now, we discharge a lot of this treated wastewater into the ocean, and we could certainly use it," George Tchobanoglous, an expert in the area of water treatment, told Discovery News. "It's certainly feasible and cost-effective in large metropolitan and coastal areas like California."

Given its scale — if officials go through with it, it would be the largest treatment program in the world — the toilet water's price tag would be quite hefty, coming out to around $1 billion dollars.

Other cities that have tried similar programs. A treatment plant in California's Orange County was built in 2008 and cost about $620 million, according to CNBC. CBS reported in June that the plant would increase output from 70 million to 100 million gallons per day, and Orange County Water District general manager Mike Markus told the outlet that the facility can currently provide enough water for almost 850,000 people per year.

The city of Perth, Australia, has said it's "committed to recycling 30% of wastewater by 2030," and noted that it recycled about 2.4 billion gallons in 2014 and 2015, according to the Water Corporation of Western Australia.

"It's a watershed moment right now, we're seeing widespread acceptance of these technologies," Markus told Mic. "As the shortages become more extreme and water supplies are cut, it has raised awareness that we need to find alternative resources."

[Microfiltration] gets rid of bacteria, protozoa and suspended solids in the liquid by pushing it through a series of fiber membranes filled with tiny, hollow tubes ... During reverse osmosis, specially made plastic sheets allow the passage of water while harmful material as small as a molecule is separated out. [Then,] ultraviolet disinfection destroys any of the water's remaining viruses.

Of course, people are still iffy about the concept. Given the beginning stages of the toilet-to-tap process — water that is, quite literally, full of shit — it's understandable that people would be a little bit hesitant.

In Toowoomba, Australia, for example, a group called "Citizens Against Drinking Sewage" successfully quashed a plan to incorporate recycled water sources, "citing health risks and emotive factors," CNN reported. A May New York Times story noted that "enticing people to drink recycled water, however, requires getting past what experts call the 'yuck' factor."

But other insist the water is fine; drinkers of water from the Orange County plant "complain the water actually has no taste" because of how clean it is.

For residents in Southern California, their turn may soon come: According to CNBC, the water agency's board will vote on the pilot program Nov. 10. It's time, as they say, for the shit to hit the fan.