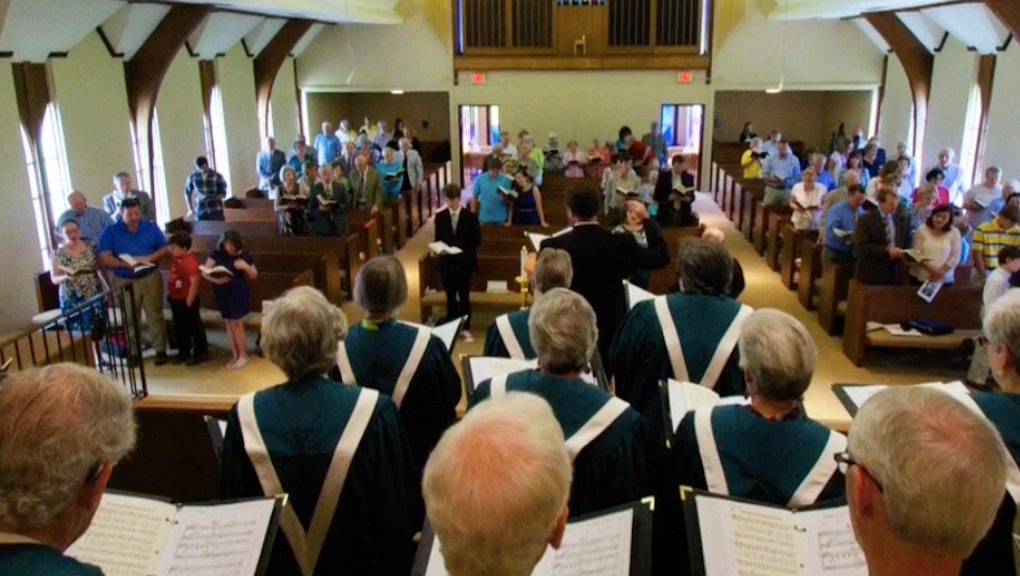 "Jesus loved everyone, and so do we."

That's the motto of University Baptist Church, located in Hattiesburg, Mississippi. As you drive through Hattiesburg, you'll see the motto, along with pictures of the church's pastor, Rusty Edwards, and their associate minister Kathryn Spangler on a roadside billboard.

"We weren't going to remove our names, but there would not have been time if we wanted to," Dick Allison, former pastor (1992-2003) and now member of University Baptist church, told Mic. According to Allison, who is a hospital chaplain, the church's bylaws require a certain amount of notice to take action on such an issue.

Baptist churches operate autonomously, but they do join associations as ways to connect with like-minded Baptist churches, pool resources and plan events. However, as is evidenced, sometimes the unlike-minded are not allowed. Allison was clear that they never asked to be kicked out and waited for Pine Belt to make the first move.

"We let them kick us out because we weren't going to say, 'We don't want to be in your association anymore,'" Allison said.

According to Allison, and UBC's website, the church takes a stance of being "open and affirming" to all people who seek to sit in its pews. That definition changes from person to person, and Allison clearly said that they have not taken a stance on gay marriage, but rather have taken a stance on the inherent dignity of all people.

"First of all, you're welcome, secondly we don't judge you, we affirm you as a person of integrity and a person who has a right to be a part of the church and be active in its work," Allison said. As marriage equality has newly passed, the question of gay marriage at UBC has been illegal, but it is one Allison says the congregation will have to address in the future.

They've had an official "open and affirming" stance since racial integration, a movement at which UBC was on the forefront in Mississippi.

When two Nigerian students came to Hattiesburg in 1971 to study at William Carey University, University Baptist Church welcomed them into its ranks, becoming the first church to integrate its membership, according to UBC's website.

"Our pastor at the time got in his car and went to William Carey and brought them to church," Allison told Mic. "We went after them. The church has always had that kind of openness."

The church's welcome video shows Pastor Edwards saying, "Jesus describes the Kingdom of God as a great banquet where all are welcomed."

That reputation is a point of pride for the church and its members, though it does bristle others, like the Pine Belt Baptist Association.

Lea Matthews, a Master's of Divinity candidate at Union Theological seminary and former member of UBC told Mic that she would be teased from a young age over her family's membership.

"I was in a ballet class as a 7 year old kid and I was made fun of for going to UBC," Matthews told Mic. "They said 'That's not a real Baptist church." Even her mother used to poke fun at their membership. "My mom famously used to say that, when she would tell folks we were members of UBC, they would say, 'Oh, that's the communist church.'"

What are the beliefs that make them "communist" to some and "affirming" to others? Like many other churches, according to Allison, UBC is trinitarian — they believe in the Father, the Son and the Holy Spirit. But, they are not Biblical literalists, Allison said.

"I believe scripture is progressive," Allison told Mic. "I believe, for example, if you compare many of the rules and regulations of the old testament and look what Jesus did to them, you have to be a progressive."

According to Allison, who entered seminary in 1955, the Baptist church has gone through many permutations, including a huge shift right through a systematic firing of liberal seminary professors and the election of more conservative Baptist leadership. At least one author called this, Dr. R. Albert Mohler, Jr. of the Southern Baptist Theological Seminary, called this movement "The Southern Baptist Reofrmation."

Allison's views on the LGBT community have gone through an evolution, as well. When he entered seminary in 1995, there were no lessons taught about handling LGBT people of faith in a congregation.

Allison, 82, told Mic about his evolution on the issue, which went from knowing absolutely no gay people to being a pastor and member of UBC.

"I was never anti-gay, but I didn't know much about [the LGBT community] and I thought it was very strange, because it's not the life I lived, it's not the people I knew," he said. "I progressed and I'm thankful for that. Some good people helped me along the way."

Like Allison, UBC has evolved, including on its own stance on LGBT ministry. While they have always been "open and affirming," Matthews says that only more recently have they been able to tackle homophobia head-on. However, Matthews added, that still makes them the leader of the pack in terms of challenging homophobia.

"I just don't think the congregation was ready back in the mid 1990s to confront directly issues of homophobia," Matthews said. "Now you have people who are living openly unapologetic LGBTQ lives, and UBC is openly and unapologetically welcoming them. That's a huge difference."

When asked, Allison offered many stories about LGBT couples who contribute to the vibrance of the church's congregation. One man, a music professor, sings in the choir and is the choir director when the official director is absent. His partner, a handy man, is usually the first to volunteer to take on odd projects around the church.

The church is much happier embracing its LGBT members than being part of a restrictive association, according to Allison.

"As far as I know, there's nobody trying to [get back in,]" he said. "In one sense, we almost feel freer now. It's not freedom out of anger, but just freedom because we need to put that behind us now and go on and do what we're supposed to be doing as a church."

In a statement dated Oct. 27, University Baptist Church released a statement inviting its neighbors who seek a welcoming community to join them. "If you are looking for an inclusive and inquisitive community of faith that serves Jesus by actively loving our neighbors, then you will find a home at University Baptist Church," the statement, released to Mic via email, reads. "We will gladly welcome you with the love and grace of Jesus."