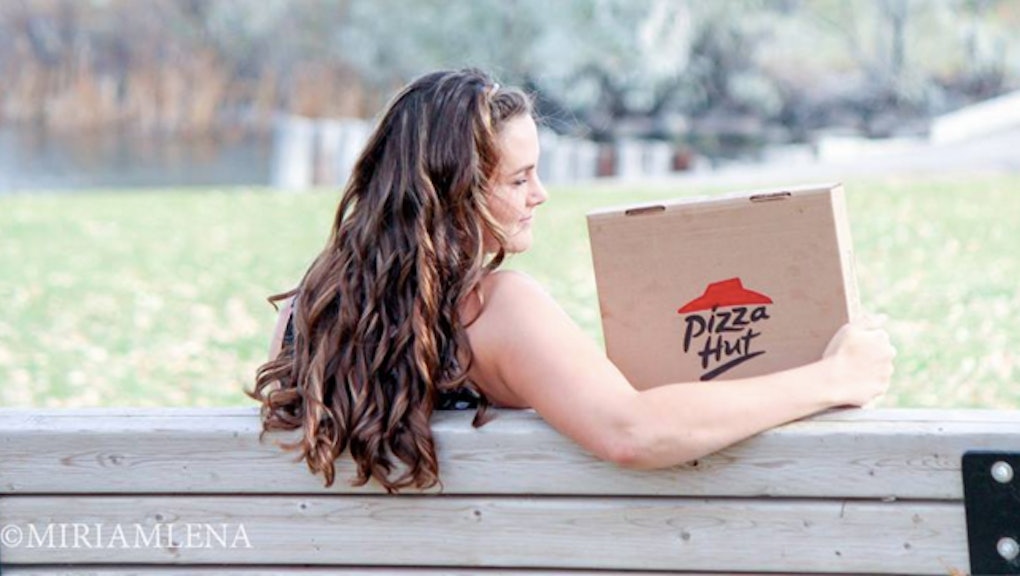 This Girl Took Engagement Photos With a Pizza Box Because She Really, Really Loves Pizza

The spirits of both of these memes have officially collided in the inspirational story of Canadian college student Nicole Larson, who has recently gone viral for finding her true love in a box of pizza — and even taking a professional series of engagement photos with it.

Larson told BuzzFeed the stunt started as just a "funny idea." To make it a reality, she got together with photographer Miriam Ott and the two created magic.

"I remember joking that these photos should go viral, but I don't think either of us thought that the response would be this huge, so fast and so positive," Ott wrote on her website. "We were just having fun with her idea and giving the pizza box as much character as possible."

Ott added that although this was intended as just a fun lil' joke, there is a legitimate message behind it.

"[Larson] wanted this photoshoot to have a message of empowerment; to promote body positivity and not needing a boyfriend to make you feel loved," she wrote on her website.

This isn't the first time someone has turned the concept of an engagement picture on its head by doing a photo shoot solo. Earlier this year, for example, David Sikorski pulled a similar stunt with a burrito. Sikorski told Mic then that he took the photos to combat the deluge of engagement photos in his Facebook News Feed.

"Before social media, I feel like the only people that would remind you that you eventually need to settle down would be your in-laws or your grandmother during the holidays," he told Mic. "My Facebook has just been riddled with images of engagement, marriage and baby photos every day."

But whether it's a burrito or a pizza, one thing is clear: Food is bae. Food is love. Food looks good in photographs with humans.

Check out the full album of pictures here.