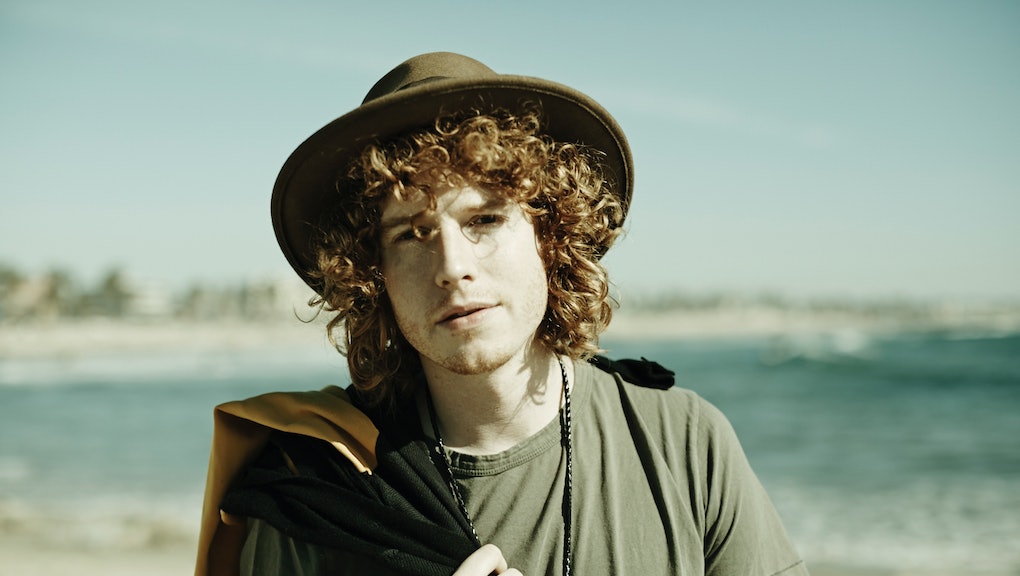 D.A. Wallach Talks Investing in the Future and Making Music Inspired by the Past

D.A. Wallach is a red-headed, piano-playing, Harvard-educated policy wonk from Wisconsin — not exactly the background you'd expect to start a bidding war between Kanye West and Pharrell Williams. However, with a unique sound that Wallach told Mic merged "'60s-style songwriting ... with some of the viscerality that you find in modern hip-hop," his band, Chester French, faced one of the most awesomely difficult decisions a band has ever had to make. They chose Pharrell.

Wallach has come a long way since then, but his drive is still the same. After two studio albums with Chester French, Wallach is now striking out on his own, reinventing his irresistible sound for his first solo album, Time Machine, released in October. Despite not knowing how to play the piano before recording the album, the instrument serves as Wallach's very capable wingman during his lyrical explorations of life and love.

In addition to music, Wallach runs an investment fund with billionaire Ron Burkle. Mic recently talked with Wallach about his new album, his investment fund and why there are still so few people paying for music in 2015.

Mic: How would you describe your sound and how it has evolved from the Chester French days?

D.A. Wallach: I've always wanted my music to bring together eclectic influences, and the artists that I've always admired the most have been really good at synthesizing different traditions and different styles. And so Chester French was really about trying to bring two things together, we wanted to take sort of the '60s-style songwriting with really colorful sort of adventurous playful arrangements and give it some of the viscerality that you find in modern hip-hop. So we were really trying to do basically kind of Beatles-era songs but with the production that Outkast or contemporary hip-hop acts would apply.

For me, this record was really my attempt to put forward a very strong statement as a songwriter first and kind of a singer and a producer second. A song is like the architecture of the house and then the production is the furnishings, the coat of paint you put on it, all the more the superficial aspects. With this record, I really wanted this architecture to be durable and compelling.

Mic: I was scrolling through your Twitter feed last night and I saw the mention of Elon Musk and his house and a party there being the inspiration for the song "Wander."

DAW: Well, I can't say much about it, but I was in Elon's house about a year and a half ago and he had a great party — he throws amazing parties — and the song "Wander" is inspired by conversations I had with a girl I never met before who was there at the party. She was just a really interesting character. I walked home that night with a head full of ideas that I imagined about her life and where she came from, and I think songwriting always takes reality and adds to it an imaginative extension. I was so inspired by meeting this person that the next day I just sat down and wrote that song in a single sitting, sort of like a tribute to her.

Mic: Earlier we were talking about how your overall style has changed since Chester French. Whether it's artists or genres, were there inspirations for this album?

DAW: The Beatles, Beach Boys, Elton John, I think what is common to all those folks is that, one, their music is very rich in terms of the songwriting, it's not so much about the production, although they all have great production, but it's really about the songwriting. The second thing I love about all those artists is that I really think of their music as fine art. It's music that's not meant to be background music.

It feels like everything [today] is made for a dance party. It's great if you want to have it on and you're doing work or when you have friends over or whatever, but there aren't a lot of records that come out today where I'm fully nourished just sitting there and listening to them with my eyes closed. So I really wanted this album to be that for people.

Mic: You had mentioned struggling to find something that you could really fully engage with, who are you listening to right now that you'd recommend to Mic readers that may not be on our radar yet?

DAW: My wife and I really enjoy this artist Jamie Woon — I think he's fantastic. I really like the Kendrick Lamar album, I love the Punch Brothers, I've been listening a lot of the Bee Gees lately — obviously that's not new, but it never gets old. Listening to a lot of Chic lately. Linda Ronstadt is just one of my favorite singers, and her version of "Everybody Loves a Winner," [I've] had that on repeat lately.

Mic: I want to talk about technology and some of your investing. For folks who aren't familiar, do you want to just lay out what you've been doing and how you're approaching it?

DAW: The really exciting new development in that part of my life is that I've launched an investment fund as a partnership with a guy named Ron Burkle who's a major investor here in Los Angeles. What we're trying to do is support entrepreneurs who are building businesses that attack really difficult and important problems for humanity. I really believe that humans are on the verge of some major advances in the way we understand how the human body works. Right now I think we have a pretty primitive understanding of it.

Mic: What's the most promising technology or company you've seen? What's a technological breakthrough you think we're on the verge of in the next five years no one is really talking about yet?

DAW: One thing I'm really interested in right now is a company I saw a couple of weeks ago called Emulate. They're actually a spinout of an institute at Harvard. They build these little organs on a chip.

As an example, you can take lung cells from somebody and put them in one of these chips and then replicate the microenvironment that those lung cells would be in an actual lung. So in other words, you create a simulation around them that tricks those cells into basically thinking that they're still in the lung. Then you can test different drugs on them and you can put microscopes on them and basically take videos of what's happening at the cellular level in real time. All of these diseases that we're dealing with in the species are basically cellular-level diseases, cellular-scale diseases, molecular diseases.

Mic: I want to close with a question about the future of music. Our generation especially, we grew up, as everyone knows, with Napster and Limewire and Kazaa, and many in our generation don't feel the need to pay for music. What needs to change and why do you think people are comfortable paying $150 a month for their cable but not $10 a month for music?

DAW: I think the reason why the music industry is in such a terrible state right now is that it was just horribly mismanaged by the people running the major music companies for the past two decades. What happened basically is that Napster came out; it was obvious that consumers really liked the idea that they're computer could instantly download a piece of music. I think that when that first happened, people would have been happy to pay for it, but the record labels wanted to make it go away because they had such a terrific business model selling people CDs and records and so forth.

What they allowed to happen in the subsequent 15 years was for consumers to basically leave the main label consumption models of the past and migrate into basically unregulated, unlicensed free music experiences. I got involved in streaming music in the first place and Spotify in particular because I believe it's obvious that the only way that you could fix the industry is to get people to listen to music in legal and paid environments. So any music fan who is subscribing to Spotify or Apple Music or Tidal or any of the competitors is doing the right thing. Right now in this industry, our goal has to be to get every single person to hopefully start paying for one of these subscription services.

Mic: But how do you do that though?

DAW: In the past three and a half years, Spotify has ramped up almost 25 million and across the other services probably globally around 40 or 50 million people. So it's just the beginning, but we're definitely in the right track. When all your friends start using Spotify or Apple Music or one of these services, it becomes harder and harder for you to not be there too. It's just going to take some time.