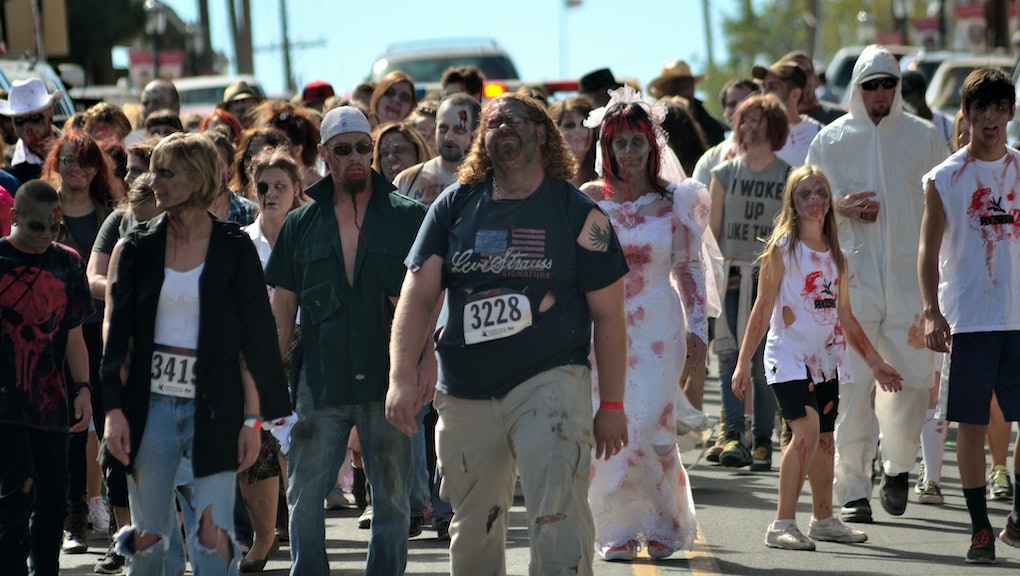 Would You Survive a Zombie Apocalypse? It Probably Depends on Where You Live

Just in time for Halloween, CareerBuilder and Economic Modeling Specialists Intl. have put together a list of which of the biggest cities in the country would be easiest or most difficult to survive in amid the release of a "standard, flesh-eating virus transmitted via biting or contact with infected blood."

As it turns out, your ability to survive a zombie apocalypse may depend somewhat more on the city you're residing in than, whether or not you've spent a lot of time doomsday prepping.

Defense scores included the percentage of each city's workforce engaged in protective services like policing, firefighting and security, as well as "the percentage of total exports coming from each metro's small arms manufacturing industries."

Other factors included whether cities had access to ample supplies of non-perishable food, as well as the number of biological and medical specialists who might be able to develop a cure for the virus in each location, assuming they haven't been ripped to shreds yet.

The Boston-Cambridge-Newton metropolitan area, Salt Lake City, Utah and Columbus, Ohio, head up the list of places where one might successfully survive the undead apocalypse. Baltimore-Columbia-Towson in Maryland and Virginia Beach-Norfolk-Newport News follow shortly thereafter — the latter because of its major naval presence.

On the other hand, the New York, Tampa-St. Petersburg-Clearwater and Los Angeles metropolitan areas (as well as many other of the county's biggest cities, such as Chicago) are total deathtraps. New York City in particular, with a relatively small number of workers in the technical sectors, is poorly equipped for containment.

When the laughs turn to screams tonight and you start to notice something is very off about that group of shuffling trick-or-treaters that have been following you for blocks, well, best of luck.