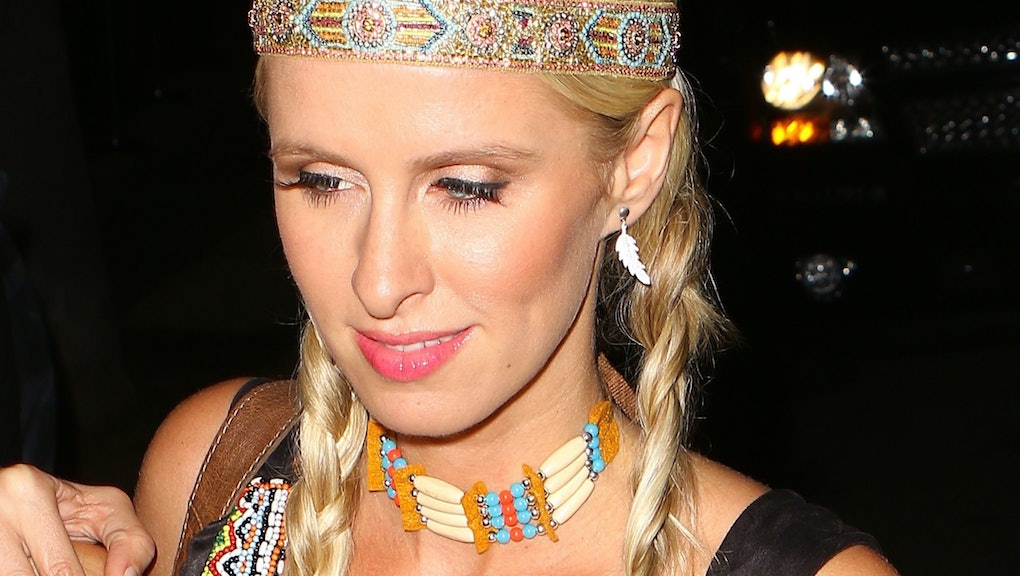 It happens every Halloween: One celeb — or several — dresses without thinking. They go out into the night, get photographed and send the Internet into a tizzy.

You'd think that with such a reliable outrage cycle, not to mention the now-ubiquitous and increasingly nuanced debates over cultural appropriation, that stars would just steer clear of the more controversial costumes.

But not Nicky Hilton.

On the Friday before All Hallows' Eve, the heiress attended the Casamigos Tequila Halloween Party in Los Angeles with her sister, Paris, dressed like this:

We thought the whole "dressing up as a stereotype of a nationality or race that is not your own" was over, given how common the conversations about cultural appropriation — what gray area should be acknowledged, what's undeniably offensive — have become.

And yet the stars were at it again this Halloween, Hilton being the most obvious instance.

Another celebrity that faltered this year is Gotham actress Victoria Cartagena, who identifies as Latina but dressed up as Pocahontas.

Her Instagram followers weren't all too happy about it.

Blake Shelton also raised a few eyebrows. At the same George Clooney-hosted shindig Hilton attended, the country singer showed up in a Mexican serape poncho over a flannel shirt, paired with a thick, black beard and a red-and-white trucker hat.

At this point, as the Atlantic noted recently, the Halloween outrage cycle over controversial costumes has become about as reliable a tradition as costumes themselves, with Halloween existing just to enrage.

But whether you're truly outraged by "appropriating" costumes, or whether you think they are all equally problematic, one thing's for certain: Celebrities should probably realize at this point that they're in the public eye when getting dressed up. And there are plenty of ways to dress up without offending anyone.