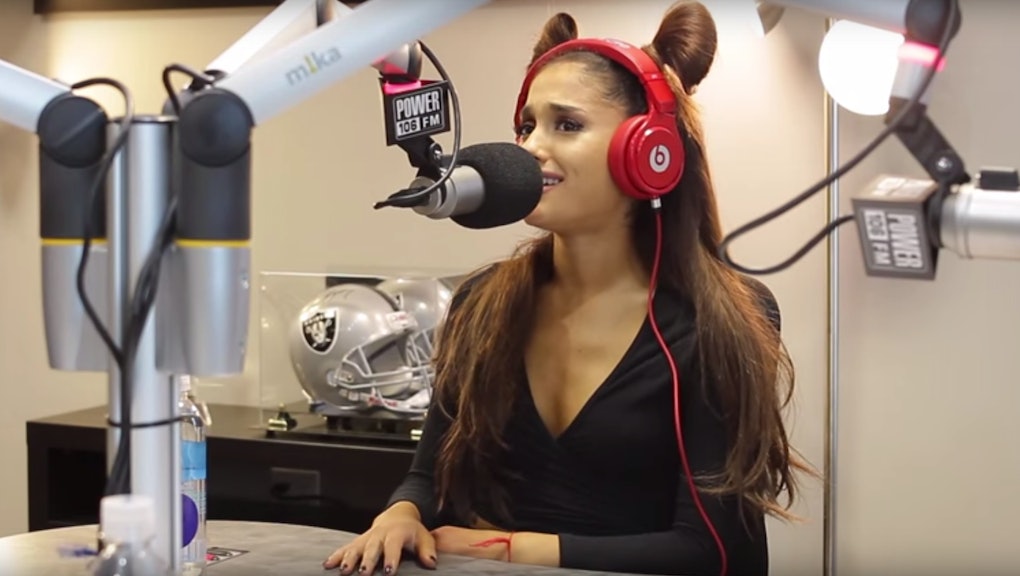 Ariana Grande hit the press circuit last week to promote her new single and video "Focus." As tends to happen all too frequently to young, female stars, Grande ran up against a handful of sexist questions and had to put some hosts in check. Thankfully, as reported by PopCrush, Grande dropped some knowledge with style.

While speaking Thursday with the Los Angeles radio station KPWR, DJs Justin Credible and Eric D-Lux asked Grande if she could only choose one item to use one last time, which would she use: her makeup or a cellphone? Grande responded with a blank stare.

"Is that what you think girls have trouble choosing between?" she said. "Is this what men assuming that that's what girls would have to choose between?"

Her hosts didn't exactly catch on that Grande wasn't going to be down to play along with normative gender roles. They pressed on with the cellphone line of questioning, bringing up the new emojis that dropped in October. Grande listed a bunch of the new characters she enjoyed, mentioning the unicorn emoji, which elicited a snort of "girls" from Eric D-Lux.

"Real men use the unicorn emoji and aren't afraid," Grande told him.

Grande in particular is used to this kind of questioning. In June, after rumors began to she had been dating Big Sean, she was hit with endless questions about dating and her love life. In an interview with the Sun, her patience reached its limit.

"I'm tired of needing to be linked to a guy, I'm not Big Sean's ex, I'm not Niall's new possible girl," she told the Sun. "I'm Ariana Grande."

Grande followed that up by posting a lengthy open letter on Instagram where she clarified her quote. "What I meant when I said what I said about not being Sean's ex is that I am tired of living in a world where women are mostly referred to as a man's past, present or future property/possession," she wrote. "I... do not. belong. to anyone. but myself. and neither do you."

Grande mirrored this positive, uplifting tone in her interview with the radio station. When asked what she would like to change most about the world, Grande couldn't chose just one thing.

"I think judgment in general," she said. "Intolerance, meanness, double standards, misogyny, racism, sexism. All that shit. That's what we need to focus on. We've got work to do."

Then, she said jokingly to D-Lux, "We'll start with you."

Watch the full interview below. The section in question starts around 16-minute mark.