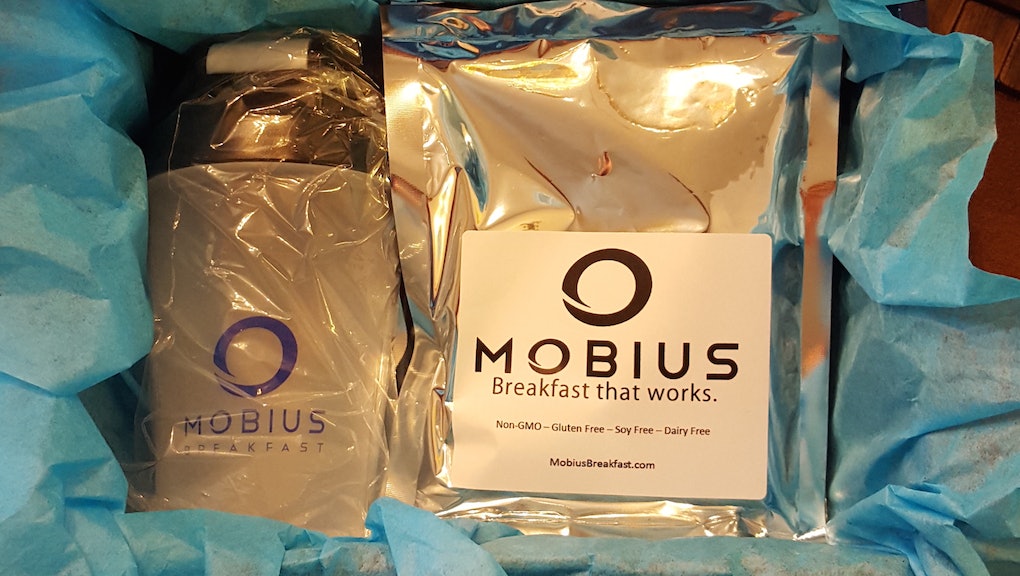 Brain Drugs Are Just Part of This Complete Breakfast

For anyone having trouble kickstarting their brain first thing in the morning, your breakfast is about to get a science-friendly upgrade.

Mobius Nutrition is about to launch an Indiegogo campaign for an all-in-one breakfast shake based on healthy fats, protein and nootropics (colloquially called brain drugs, or smart drugs). It's like a Carnation breakfast shake, but with supplements that optimize mental performance.

The idea, according to founders David Taylor and Michael Eichenseer, friends who graduated from Missouri University of Science and Technology, was to do to breakfast what Bulletproof is doing to coffee, injecting it with fat to boost energy and performance. Whereas Bulletproof's not-so-secret ingredients are butter and MCT oil, Mobius adds coconut milk, protein (about 20 grams per shake) and vitamins.

"We wanted the main fuel source for people to be healthy fat," Taylor told Mic. "That's a more consistent energy stream, and [it] doesn't cause insulin spikes."

But the hopeful game-changer here is the cocktail of cognition-improving nootropics. Besides 100 mg of caffeine (a little over a standard cup of coffee), Mobius has 1,000 mg of L-carnitine, 500 mg of gotu kola, 200 mg of ashwagandha and 300 mg of rhodiola rosea.

The doses of nootropics are at "the low end of what is used in research studies," Taylor told Mic. "We didn't want to include higher doses. We are wanting our customers to drink Mobius daily and the nootropics will have an additive effect over time."

What will it do to your body and your brain? Let's break down the science behind the label.

Carnitine, according to the National Institutes of Health, acts as an antioxidant that's made in the liver and kidneys and can be used to produce energy. Carnivores tend to have plenty of this already, since four ounces of steak can have up to 162 mg of carnitine. However, from the same set of reports, no consistent evidence was found to support carnitine's use for physical performance.

Gotu kola comes from the Eastern medicine family, derived from a plant found in India, Japan, China, Indonesia, South Africa, Sri Lanka and the South Pacific, according to the University of Maryland Medical Center. A 2010 study in the Nepal Medical College Journal found participants who took 500 mg of gotu kola twice a day experienced a decrease in anxiety attacks, plus weaker bouts of depression.

Ashwagandha has been found to work as a de-stresser, according to a 2000 study in the Alternative Medicine Review, and a 1997 study in Neurochemistry International showed positive effects on the neurotransmitters of lab rats who were given ashwagandha, leading to higher cognition and better memory.

Rhodiola rosea is another purported stress reducer, found by a 2004 International Journal of Sports Nutrition and Exercise Metabolism study to improve exercise endurance. A 2000 Phytomedicine study found rhodiola rosea to uphold mental performance (though there's some evidence it might cause sleeping problems in really high doses).

In the shake, all of those supplements will hopefully be masked by dark chocolate and cocoa flavors. Eventually, there will be caffeine-free, sugar-free and vegan options.

The idea of a superbreakfast that isn't just a balanced plate of solid foods can sound sketchy. But Mobius is an interesting first step in nootropics going mainstream, used regularly by the masses, not just by people who take a more experimental approach to improving their minds and bodies. We count on breakfast to give us our first jolt of energy in the morning. Why shouldn't they make your brain run better and work harder too?