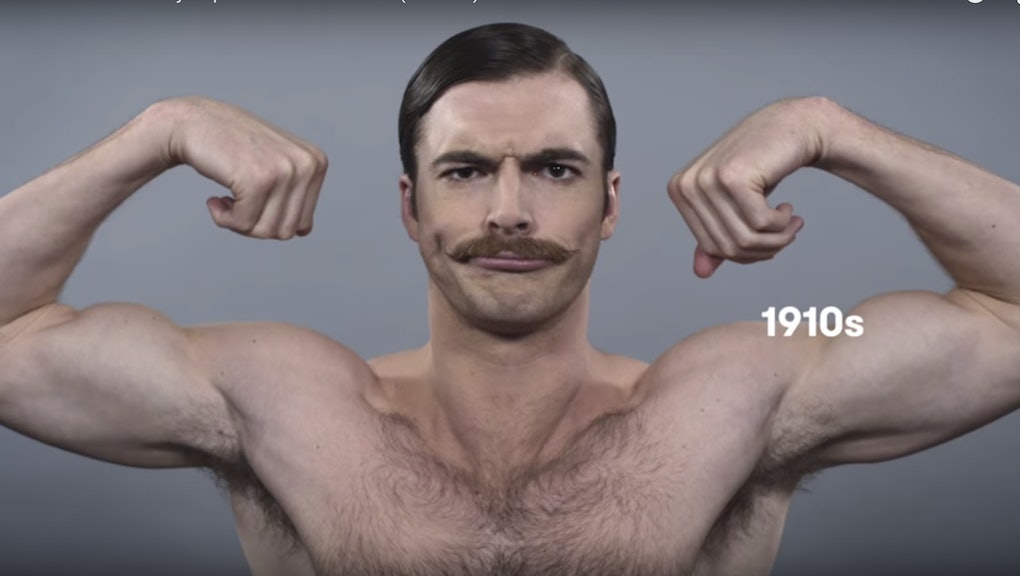 100 Years of Facial Hair, In Less Than 2 Wondrous Minutes

Since news broke that our strange obsession with dudes with beards could lead us into the arms of a lying cheater, we've been heartbroken. We've been in shambles.

But fear not, those who love them some serious man scruff! Because now you can lay your eyes upon a new video that showcases the majestic and magical evolution of beards, that has led us to top-knotted bros today.

On Monday, Cut Video, the geniuses behind the "100 Years of Beauty" series, debuted a new video in which viewers can gaze at hunk model Samuel Orson as he dons the most popular looks for men from 1910 until the present. The history of facial hair is an ever-fascinating one that reflects the norms and mores of the times, not to mention the technology.

Now, we get the pleasure of seeing these changes on one seriously handsome model.

Okay, so here is our boyfriend before the transformation. Not too bad, right?

Now to the 1920s, where we get a look sans facial hair, which is just unacceptable. (He still looks good though.)

But don't fret! The 1930s are here and he's still at it, with a mustache a la Clark Gable.

For the 1940s and '50s, we experience an unfortunate drought, with two decades of clean-shaven faces. However, we do get treated to a sailor cap.

The 1960s and '70s, as expected, totally make up for it with completely spectacular facial hair that would make Drake's dad (and Jesus Christ) envious.

According to the video's editor, Chris Chan, the 1960s look was actually the most surprising to research, telling Mic, "The '60s look is a strange amalgam of social forces: On the one hand, Samuel wears the countercultural signifiers like the goatee and long, hippie hair that reject the regimentation of middle class respectability," he said. "On the other hand, the image we are referencing comes from a magazine ad selling antiperspirant that was designed in boardrooms by corporate advertisers on Madison Avenue."

Apparently the '80s were useless...

But the '90s were totally chill.

And they set us up for a decade of no facial hair (literally leave, get out, 2000s).

Thankfully, that called for a resurgence. Hello, 2010s!

And a special thank you to our future fiance Samuel Orson for existing. Check out the video in full below: