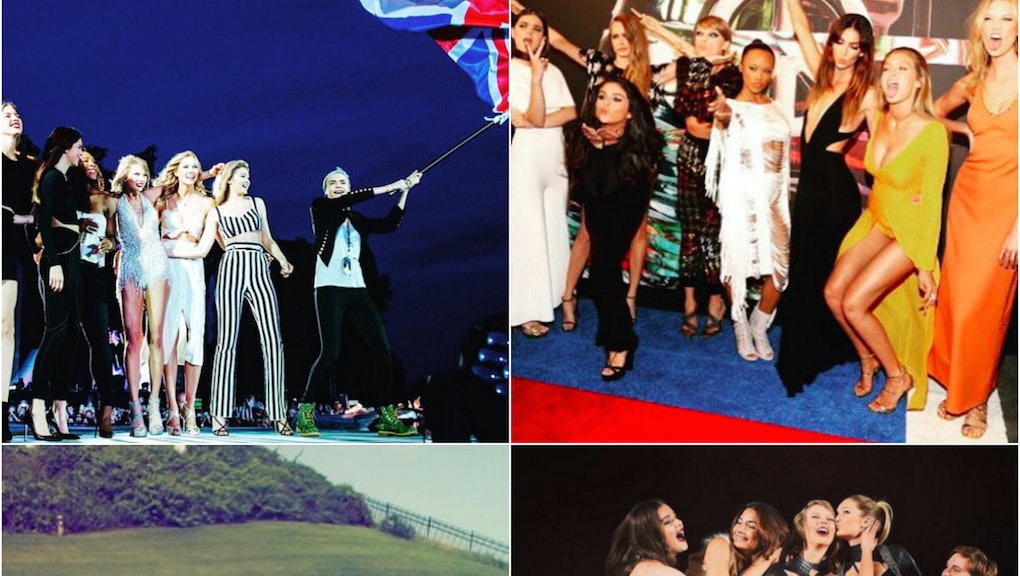 The Reason Why Taylor Swift and #SquadGoals Are Totally Disturbing

My first experience with being bullied by a large group of young women happened when I was 11 or 12 years old. I was at summer camp and placed in what was commonly referred to as the "loser bunk," which basically meant we had orthodontia and were bad at field hockey and always got ketchup on our camp uniforms.

For most of my summers at camp, I had basically one friend: a girl named Emily, who'd co-write a novel with me during activity period. (We once spent a bunk inspection tango-ing with and making out with a broom, so maybe the "loser bunk" designation was somewhat merited.) While we'd always been in the loser bunk together, through some twist of fate that year Emily had ended up in the "cool bunk," which meant they had jangly Tiffany's bracelets and choreographed Avril Lavigne songs during rest period and never got ketchup on their uniforms. They were cheerful and terrifying, and I hated them.

Despite the bunk switch, Emily and I stayed friends for a good part of the summer, until a falling-out over a comment I made which she misconstrued as an insult calling her fat. I was devastated and spent all day trying to get her to talk to me. That night, I heard the thunderous clamor of footsteps coming up the bunk stairs. It was the girls in the cool bunk, all 15 of them, there to defend Emily.

For what seemed like a solid hour, I stood, frozen before the firing squad, listening to the cool bunk call me a bitch and a loser. I stood there for a good five minutes afterward, their giggles resounding in the mountain night air. Then I went into the showers and cried until lights-out.

It is for this reason that I believe I'm so terrified of Taylor Swift and her #squad.

The backlash against Swift's squad: Like many people who were bullied as preteens, I am mildly unnerved by large groups of attractive young women. Every time I see a group of giggly preteen girls or leggy teenagers trying to look as bored as possible outside an H&M, my mind flashes back to that encounter with the cool bunk — or the time my former middle school BFF spread rumors about me making lesbian voodoo dolls, or the time another group of girls at camp called me EJ Suck-My-Dickson, or any of the other minor acts of girl-on-girl brutality that peppered my adolescence.

Much has been written about Swift's espousal of #squadgoals, as demonstrated by the famous friends she collects and displays onstage like Beanie Babies. The list is ever-growing, and it includes recording artists (Selena Gomez, Ellie Goulding, Lorde), millennial media icons (Lena Dunham, Tavi Gevinson), actresses (Hailee Steinfeld, Sarah Hyland), models who want to be actresses (Gigi Hadid, Cara Delevingne) and the guy your mom refers to as "the Brit — I don't know his name, but there's something about his face I just don't like" (Ed Sheeran).

At the start of her 1989 World Tour, Swift's squad was lauded by the media (including this publication) for setting an example for young women of the positive power of female solidarity. Instead of making headlines for who she was dating, Swift was making headlines for her strong friendships, as noted by the New York Times' Jon Caramanica.

"[Swift embracing her squad] was a public service announcement for the healing powers of female friendship," he wrote in the New York Times. "Rather than be known as a serial dater, she'd prefer to be thought of as a serial befriender."

But even if Swift is "genuinely obsessed" with her female friendships, as GQ's Chuck Klosterman wrote, the backlash to the #squadgoals mentality has been fierce and — why not, let's just go there — swift. A viral YouTube sketch skewered Swift's habit of parading her famous friends on stage, while a gently mocking Saturday Night Live sketch envisioned a post-apocalyptic world where no one is safe from being swept up in Swift's squad.

One reason so many people are skeptical of Swift's squad is because they're skeptical of her motivations. In a piece on Gawker, Dayna Evans argues that #squadgoals were nothing less than a cynical branding play to ensure Swift's fans see her as one of them, rather than as the leggy, blonde cheerleader who tormented them in high school:

"Swift is not coming from behind. She's been ahead since she started. And watching her collect best friends during a moment in history when womanhood is finally beginning to feel valued does not only feel uncomfortable — it feels evil."

But there's another reason Swift's squad prompts such public discomfort, a reason few feminists wish to acknowledge because to do so would be contrary to the narrative of female friendships as unequivocally empowering.

Sometimes, they are not empowering. Sometimes, female friendships — particularly among large groups of attractive young women — can be terrifying. And this is a phenomenon that doesn't end with high school.

The enduring reign of girl cliques: Even for those who weren't bullied in high school, it's not news that teenage girls are adept at the art of making each other's lives a living hell. Studies have shown that while young men tend to reinforce social order through physical violence and brute force, young women opt for relational aggression, or a more passive-aggressive form of bullying characterized by "exclusion," "intimidation" and "manipulative affection."

As demonstrated in Rosalind Wiseman's 2002 book Queen Bees and Wannabes, this teenage relational aggression manifests itself in cliques, or highly structured, hierarchical groups of women whose protocols are dictated by a "queen bee."

While one might think such tight-knit female friendships can help build young women's self-esteem by providing a sense of validation and identity they might otherwise seek from men, Wiseman reports that isn't the case.

"During their period of greatest vulnerability, girls' competition with and judgment of each other weakens their friendships and effectively isolates all of them," she writes. "This is what the power of the clique is all about, and why it matters so much to your daughter's safety and self-esteem."

This pack mentality doesn't vanish as young women reach adulthood. If anything, the power of the queen bee and cliques becomes magnified after high school. In a book on grown-up mean girls, author Cheryl Dellasega says women rarely shed the social roles they acquired in high school once they reach the workplace:

"The head of a clique of mean girls in middle school aggressively makes her way through high school and college and bullies her way to the top in career or volunteer pursuits. The go-between girl who learns to survive by staying in the middle position continues to operate 'behind the scenes' in adulthood."

None of this is to say the girl-power ethos behind #squadgoals is totally invalid, or that women are incapable of forging healthy relationships with other women; to say otherwise would be to reinforce the narrative of women as jealous, catty bitches who are constantly competing for male attention. Unless you're literally a telenovela character, that line of thinking is reductive and misogynistic; the more counter-narratives we have out there to dispute it, the better.

What it does mean, however, is that there's an awful lot of baggage attached to the concept of #girlsquads that Swift's narrative ignores. The people who buy her music — the girls with skin problems and weight issues and social anxiety and condiment stains on their clothing — would never be allowed into a group filled with the leggy, perpetually manicured kind of girls who fill Swift's own ranks. By cloaking her #squadgoals in a veil of feminist inclusivity, Swift offers up invitations to the millions of girls watching, while blithely ignoring the painful reality of how squads truly work.

A squad isn't always a source of feminist social support or an oasis of nurturing female friendship in a desert of misogyny. Often, it's a more subtle extension of adolescent hierarchy that puts some girls in the cool bunk and some girls in the loser bunk, a terrifying funhouse mirror-image of what it means to actually be a woman and have close female friends in a world that is hostile to women and skeptical of their friendships already.

The truth about #squads: This painful truth about squads came into sharp focus in October, when five-time Oscar nominee Amy Adams gave a speech at Loyola Marymount University in which she earnestly described her desire for Jennifer Lawrence and Amy Schumer, who debuted their BFF-ship over the summer, to invite her into their squad.

"I hope I was funny today so they will invite me to their next boating party," she told the crowd, according to People, ticking off a few reasons why she'd be a good member. "I'm a little more neurotic than both of them. But I think that would be – they need a little of that, and they're both so cool and I could be the 'not-cool' person," she said. It was the Hollywood equivalent of the nerdy girl asking her cheerleader lab partner if she could sit with her at lunch.

Predictably, bloggers poked fun at Adams' naked desire to be part of the "in crowd." But the snark was tinged with a streak of earnestness, in part because Adams' statement rang uncomfortably true. Her words were the ones we wanted to say but never did to the cool bunk, the JV volleyball coach, the girl with perfect skin and flat-ironed hair who spread a rumor that you slept with the school bus driver.

Like all girls, Adams just wanted to belong. And if a gorgeous, five-time Academy Award nominee and A-list actress can't get into the #squad, you bet your ass there's no hope for the rest of us.

I've largely recovered from the #trauma of being in the loser bunk. When I think of that incident, and of shivering in the back of a filthy shower on a cold Connecticut summer night, I don't even remember what those girls said to me. What I do remember is feeling a profound sense of grief. I had lost my friend to this group of girls. Like the hapless apocalypse survivors in the SNL sketch, Emily was about to become part of the #squad.

In those last weeks before the end of camp, I saw Emily participating in the same activities we had both watched on the sidelines: playing soccer, heartily leading Saturday night sing, co-captaining Olympics. We never really spoke again.

I don't know if we would ever have stayed friends after camp. But I do know if she had ever wanted to come back to my small, awkward, ketchup-shirt-wearing #squad, she would've been welcomed with open arms. And I like to think anyone else would have been welcomed too.