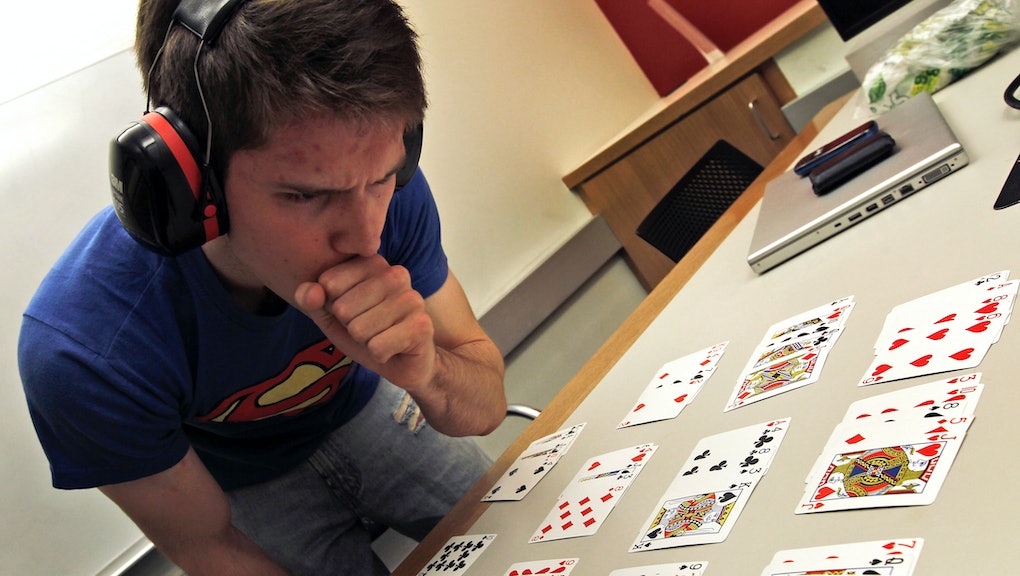 How to Hack Your Brain and Memorize Anything, According to Expert Mattias Ribbing

A memory expert is sharing his secret for never forgetting a name — or anything else.

When Swedish memory expert Mattias Ribbing needs to remember someone he just met, he pictures an object: a massive thing, blown up to cartoonish size, placed somewhere on or near the person he needs to remember. It's the first image that comes to mind. They aren't always great: For Sarah, which sounds like Sahara, he thinks of a bucket of sand. But it works for him, and he'd like to teach you how — along with a few other simple tricks you can use to hack your memory.

"Start to shift your mind to think in images," Ribbing told Mic during the Bulletproof Biohacking Conference in Pasadena, California. "Once the brain gets used to seeing images, that's also a much quicker way of thinking, and you have control over it."

Ribbing's example: When you meet someone named James, think of the first object that comes to mind. "I visualize a James Bond gun," Ribbing said, referring to a Walther PPK (or Beretta 418, depending on which Bond movies you like). "I enlarge it, I see it in 3-D. So if I see James, then at the same time I look at him I see this mental image between us, an image connection is formed in the brain."

I asked him how he'd remember my name, Max. "I think of maximum volume, so I see a big guitar amplifier," he said. "It's just the first thing that comes to mind. I picture it on your shoulder, or tuck it into your beard or something."

But how would you remember 10 things, not just one? Ribbing has a method for that too. He calls it Ribbing's Bike. Here's how it works.

Picture a bicycle, maybe your current bike — whatever you can visualize in detail. Now enlarge it in your head and imagine it as big as an SUV, standing in front of you. Think of 10 tasks you need to remember, things like picking up a file from work, dropping off your dry-cleaning, resoling your winter boots, picking up groceries, whatever.

According to Ribbing and many other memory experts, the ability to remember a million names isn't something you're born with.

Now assign an image to each thing, something vivid, with sharp lines, which Ribbing claims stick in your mind better than amorphous shapes. "For example, visualizing a sun," he said. "That's not really good because it's not a fixed outline."

For each task, take the first image that comes to mind (a pair of boots, a bag of groceries, suits on a rack, whatever), enlarge it and hold onto it. Then you'll begin putting each object on a different part of the bike, mentally connecting the two, so something like "front tire" is synonymous with "bag of groceries."

"When you visualize a bike, you place an image on the front tire, then move slowly back to the spokes, then to the hub in the center of the wheel," Ribbing told Mic. You can do the same thing for remembering talking points in a presentation, or remembering what a memory expert told you during an interview.

Whatever you do, though, just don't associate someone with sexual images or violent ones. Otherwise, every time you see that person, you'll wind up under a mountain of emotional strain.

If you feel you have a bad short-term memory, don't get discouraged. According to Ribbing and many other memory experts, the ability to remember a million names isn't something you're born with. You just have to figure out a new approach.

"Memory itself isn't that important," Ribbing said. "It's how you think in the moment that's most efficient."

For more useful lifehacks in your email inbox, sign up for the MicCheck Daily newsletter.