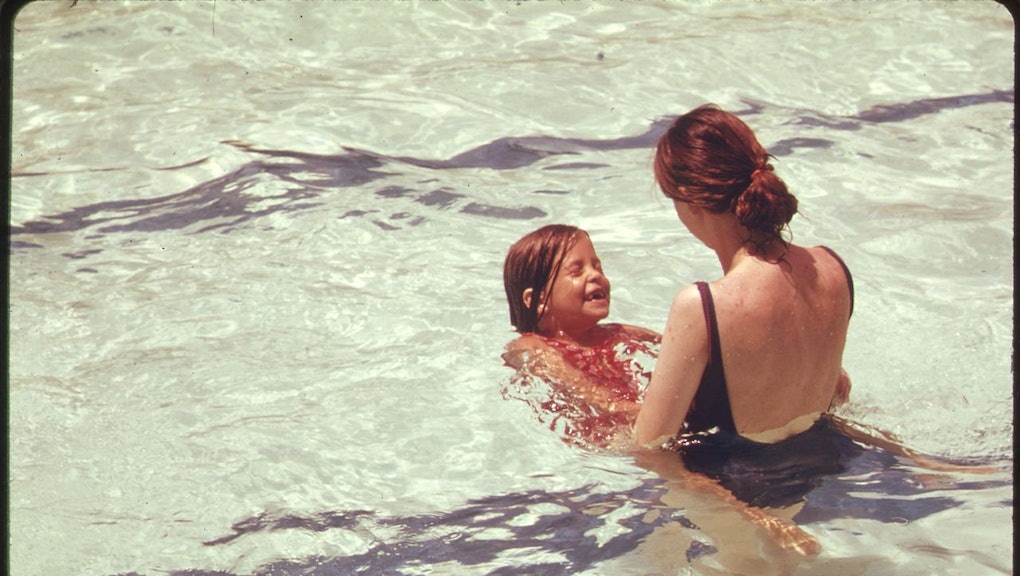 The media. The idealization of thin celebrities. Photoshopped ads. Sure, these elements all have some influence on many young women struggling with negative body image and eating disorders. But one of the most significant factors may be even closer to home: mothers.

As Leslie Sim, a child psychologist and clinical director of the Mayo Clinic's eating disorders program, told USA Today, "moms are probably the most important influence on a daughter's body image." Women frequently speak about the negative impact of their mothers' attitudes towards their own bodies, but this relationship need not be nor universally is purely detrimental. In fact, it's perhaps the best hope for broader change.

It starts early. One in 4 children engages in some type of dieting behavior by age 7, according to a report from Common Sense Media. Though many factors likely contribute to this unfortunate reality, a mother's influence is certainly one of them, according to clinical psychologist Stacey Rosenfeld.

"We have the most (and earliest) exposure to our mothers, and they serve as models before we even realize we're modeling them," Rosenfeld told Mic. "The exposure is constant and it's hard not to admire and emulate our mothers, even if some of their behavior is harmful — or disordered."

Catherine*, 22, experienced this firsthand. Her mother, whom Catherine describes as "a typical Latina beauty: skinny, tan, absolutely gorgeous," began putting her daughter on diets at a young age. Catherine went on the Atkins diet in sixth grade, she told Mic, which was the same year her mother enrolled her in a gym and tried to incentivize exercising by paying her.

"It felt like a punishment and eventually, food and exercise would become ways for me to punish myself," she said. "I internalized these behaviors and her policing of my body and food intake and developed an eating disorder that would last me well into my college years."

It's not just about dieting. Mothers not only influence their daughters punitively but can also do so, in a seemingly passive way, by modeling negative attitudes toward their own bodies.

"How a mother treats (and refers to) her body can impact how her daughter experiences her own," Rosenfeld said. "Often, women will have early memories of their mothers dieting, obsessively weighing themselves, grabbing their flesh, body bashing, etc. Even if the mother never comments on her daughter's body, it's hard not to internalize how she feels about her own."

When 23-year-old Helen* was diagnosed with Polycystic Ovarian Syndrome (PCOS) at 18, she gained a significant amount of weight and became acutely aware of not only her own body, but newly attuned to how her mother regarded hers as well.

"She was going on a strict diet and would often point out areas of her body she needed to change," Helen told Mic. "This attitude directly affected my own anxieties and acted as a mirror for my self-image. I've often been so concerned with winning my mom's approval, and even as an older teenager, I somehow felt that I had let her down because I had gained weight."

"My mother was very thin growing up and I was her only daughter, so when she gained weight she used me as her support system," 22-year-old Lyn* said. She attended her first Weight Watchers meeting with her mother at 12, presumably to support her mom, and subsequently followed her to Jenny Craig, Atkins and even a vegan diet in the following years.

Lyn is now able to recognize that her mother's reliance on her for support was not an active attempt to diminish her daughter's body image and that they both were likely influenced broader messages about "dieting and obscene body pressures from a variety of places, like peers, media and the health industry." Yet, for years, Lyn did blame her mother for "making me feel badly about my body" and the effect of this experience was hardly beneficial.

But this doesn't have to be the case. Catherine, Helen and Lyn's experiences are ones that likely resonate with many, but it's also crucial to note that there is "not a one-to-one correlation" between mothers' actions and their daughters' body image, Rosenfeld said. For example, "there are plenty of mothers who have positive body image who have daughters who struggle."

Writer, performer and activist Caroline Rothstein experienced just that. Rothstein lived with an eating disorder for 10 years and frequently draws from this experience in her creative work, as well as in work explicitly centered on body empowerment. She also grew up with a mother who "had the healthiest relationship with her body and food as any woman I knew," she told Mic.

In fact, Rothstein credits her mother's own approach to her body — which included an emphasis on valuing a body's function over its appearance — with laying the "foundation and infrastructure" for her eating disorder recovery.

"The most important lesson my mother taught me was to only be in conversation within my own body," and to never "compare my body to anybody else's," Rothstein said.

Rosenfeld supports this approach, and said that "mothers who help their daughters focus on what their bodies can do versus how they appear — a shift from body as object to body as subject — are likely to see their daughters develop a more positive body image."

While Caroline and her mother, Nancy, have had specific conversations about body image over the years, Nancy considers her success part of a broader approach to parenting. When she saw her daughter struggle with body image issues and an eating disorder, she recognized that she could "help empower [Caroline] as a mother, to find the things she did love about herself" and "help her get the care she needed" without imposing judgmental rules or behaviors on her daughter.

Ultimately, there are plenty of complex and individualized reasons young women grapple with their body image beyond a mother's influence. Focusing solely on the negative ways in which mothers influence their daughters obscures the incredible potential they have to make all the difference.

As Nancy observed, while many mothers may blame or shame themselves for their daughters' body image struggles doing so — even if they did play a part in encouraging those behaviors — it distracts from what should be a mother's essential focus: their child's well-being.