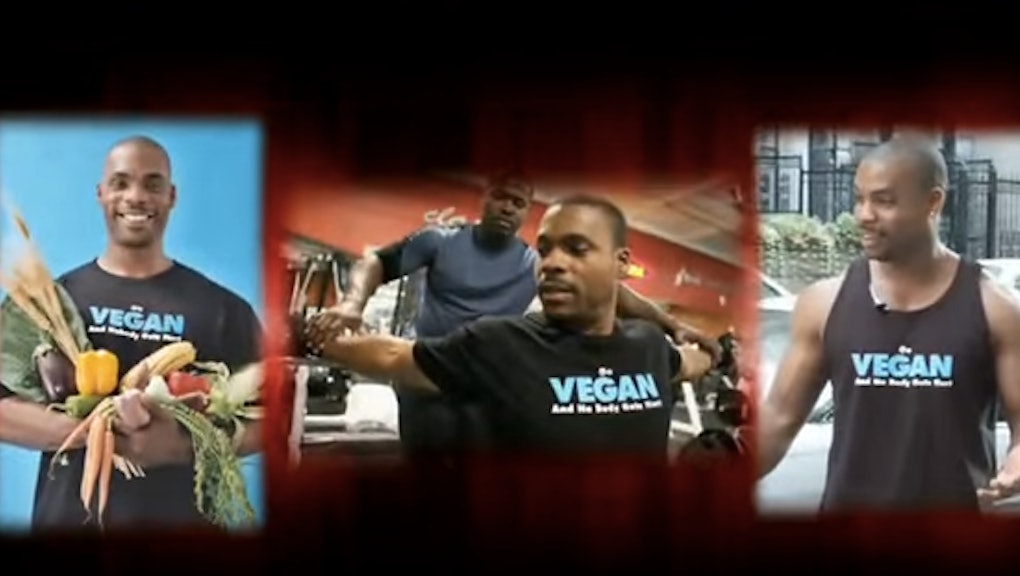 Vegan blog Thug Kitchen took off in 2013 after Gwyneth Paltrow championed the effort on her website, Goop, and described it as getting recipes from a "gangster vegan chef" on The Rachel Ray Show, according to a recent New York Times profile. As it turns out, the site was created by Matt Holloway and Michelle Davis, two 30-year-old, white vegans.

As if the approval of a website and public figure culturally synonymous with white elitism wasn't indication enough, Thug Kitchen has also been more directly criticized for perpetuating digital blackface, as the Root, Vice and many others have described it. Amie Breeze Harper, editor of the anthology and website Sistah Vegan, which explores "the black female vegan experience," called the site a "minstrel show" that reinforces "pernicious stereotypes about black people that make it easier to accept violence against them."

This doesn't seem to be an isolated incident. It speaks to a larger exclusion of people of color within the vegan movement at large, according to activists in the space who spoke to Mic. It's an entrenched reality that has at least in part spurred a growing alternative movement reclaiming what many see as veganism's true subversive potential: black veganism.

Racism in the mainstream vegan movement: Although an estimated 6% of black Americans are vegetarian or vegan, according to a 2012 Harris Interactive poll, the "mainstream" vegan movement is "predominantly led by white activists, theorists and authors" Aph Ko, a vegan, feminist blogger and activist, told Mic. Not only are the most privileged members of the movement the most visible, but they're also promoting goals that fail to account for the perspectives of the most marginalized: Many leaders fail to accommodate an intersectional approach, analyze "how animal oppression is linked to other oppressions" or recognize "how white supremacy actually sustains animal oppression," Ko said.

It's this failure to allow people of color or other marginalized groups to "articulate or address the problem from our perspective" that is perhaps most pervasive in the mainstream vegan movement, feminist and vegan blogger Syl Ko told Mic. "It's yet another space in which white people will dictate to us what we should care about and why and how."

Perpetuating this single, privileged perspective, however, limits the movement at large and fails to acknowledge the role race can and does play in the effort.

"A person who does not factor her race into her decision-making process every day might have a very different understanding of what the animal problem is compared to a person whose experiential backdrop is racism," Syl Ko said. "The former might draw parallels between racism and speciesism but hold that the two are fundamentally independent phenomena, while the latter might conclude that the two are so deeply intertwined that one cannot be understood without the other."

What's more, when black vegans attempt to incorporate "blackness and antiracism" into conversations within the movement, Aph Ko has found that they are "attacked." When she decided to spotlight 100 black vegans to "dispel the stereotype that veganism is a white person's thing," she received criticism from mainstream vegans who argued race was irrelevant to the discussion of animal rights.

Racism is also perpetuated in tactical ways. Rather than promote "new frameworks for people to unlearn oppression and to rethink their behaviors," some mainstream vegan organizations draw comparisons between animal cruelty and violence against marginalized groups to supposedly "shock" people into action. For example, the mainstream animal rights movement has compared animal abuse to lynching, Aph Ko pointed out. Doing so sends the message that "black oppression is merely something to compare other oppressions to" and that such "oppression is over and therefore, historical," rather than a persistent, systemic issue, she explained.

This comparison not only invokes violence black people have historically faced but other forms of racism as well, including devaluation and degradation in terms of rhetorical and social comparisons to animals.

"Since black people have been 'animalized' in America for so long, a lot of black folks don't want to be associated with animals in any way," Aph Ko said. Black individuals have been (and still are) derogatorily compared and referred to as animals — and even historically put on display in zoos — to justify the violent atrocities committed against them.

Black veganism: Nonetheless, activists of color are refusing to tolerate this status quo and are organizing their own movement. Harper has explained on the Sistah Vegan website that the black vegan movement fights for a vegan movement that completely embodies practices to fight oppression of all types, including white supremacy.

For years Aph Ko said she thought veganism was "just for rich white people who had the privilege of caring about animals because they didn't have to deal with racism everyday." But after reading Sistah Vegan, the feminist activist reconsidered.

"As activists, we're supposed to be going to different sites of oppression and fighting and resisting," she said. "When you're trying to bring down an oppressive system, you should always look to the most oppressed beings to decide what your strategy should be." Considering the exploitation of animals only "strengthens the system that [activists are] trying to dismantle," she said, adopting veganism made sense.

For others, like Tracye McQuirter, author of By Any Greens Necessary, veganism is also "an act of self-love, self-care, self-preservation and self-liberation," she told Mic. "How we nourish ourselves is inextricably linked to every aspect of how we live our lives, including being activists in the fight for justice and equality."

McQuirter cited the health benefits of veganism as a means for black people to find greater liberation. For example, 300,000 black people die each year from preventable, diet-related chronic diseases, including heart disease, obesity and hypertensive disease according to the Centers for Disease Control and Prevention, Ebony reported in April. Many studies also show black Americans disproportionately face barriers to receiving adequate health care in the United States.

"As activists, and everyday folks dealing with multiple forms of oppressions on a daily basis, we are in a heightened state of moving, thinking, organizing, resisting, multitasking and stress," McQuirter said. "Our immune systems are taking a hit, and we need to be sure they're being strengthened. This is precisely the reason to increase the amount of healthful foods we're eating right now and on a lifelong basis."

Ultimately, Aph Ko said, black vegans hope feminists and antiracist activists will recognize that "though our oppressions might manifest differently" their movements "have a common oppressor" and "we are all being violated by the same systems."

Claiming space: While black vegans still face resistance within many of their communities, they're hardly waiting for others to come around: Just as black feminists are constructing their own movement — and labeling racism in mainstream feminism "white feminism" — black vegans are calling out "white vegans" and forging ahead with their own movement.

"Rather than trying to make the mainstream white vegan [and] animal rights movement inclusive, we're just expanding our own movements," Aph Ko said. "We are our own leaders. We don't need to look to white people to create the theories and create the activist campaigns for us."

Ultimately, black veganism is not just about animal rights: It's part of a much larger activist project to promote antiracist and feminist politics.

"I think there's a revival of black consciousness that's happening in our generation, and the black vegan movement is the epitome of this," she said. "We are a part of Black Lives Matter, we're feminists, we're inclusive and we are very adamant about not abusing animal bodies and not objectifying them."

She concluded, "There will be no liberation until all sentient beings are treated fairly."