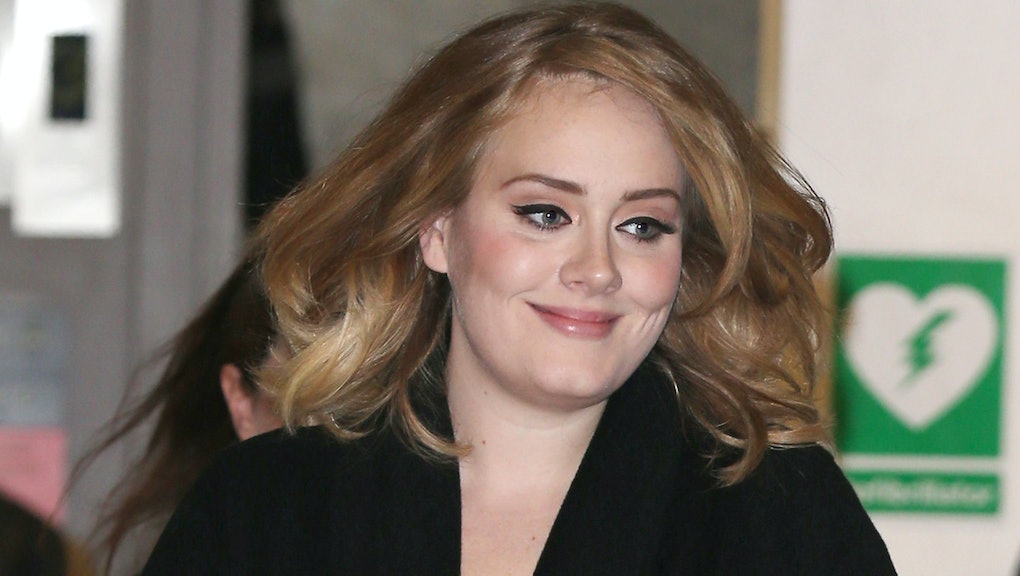 Adele Comes Out as a Feminist in Rolling Stone Interview, Talks of Sexism in the Industry

"Will you ask me if I'm a feminist?" Adele asked her interviewer, Brian Hiatt. She was discussing the unequal treatment male and female stars receive in the press, pointing out that male stars are rarely asked to proclaim themselves pro-feminism in interview, unlike women. "I don't think many men in interviews get asked if they're feminist."

However, the idea didn't make her flinch in the slightest, as it has other pop stars in the past. Without even being asked, Adele said, "I'm a feminist," and sipped some wine. That image alone is powerful enough, but she backed it up with an inclusive and intersection definition of that means to her.

"I believe that everyone should be treated the same, including race and sexuality," she told Hiatt.

It seems Adele has some real experiences motivating her to take such a bold stand — but that's not surprising. She works in an industry that is notoriously sexist, despite its love of female pop stars.

She describes being in business meetings "full of men" and not having her thoughts and views taken seriously. "It's like, 'Well, I'm the fucking artist,'" she told Rolling Stone of what she felt in those moments. "'So I fucking know everything, actually! Like, don't fucking talk down to me!'"

Adele then promptly broke nearly every record in the book within the first week of her return to music. So, as it turns out, she was right.

Unfortunately, Adele's experience isn't unique. Artists at all levels have shared similar experiences in recent interviews. Nicki Minaj summed her issues up quite concisely for Time back in February.

"Women in the industry are judged more," she said to Time. "If you speak up for yourself, you're a bitch. If you party too much, you're a whore. Men don't get called these things."

In an interview with Telegraph, Alicia Keys, who shares Adele's penchant for dynamic and dramatic vocal performances, described facing sexism from all angles of the industry when she was first starting out. For her, much of it had to do with executives trying to sexualize her.

"'Oh that's beautiful, that's nice, why don't you unbutton the shirt a little lower, pull the skirt a little higher, it's really nice,'" she told the Telegraph she would hear. "That kind of set me on my path to be stronger about not letting people tell me anything, only trusting my own instincts, but that's tricky too."

On the independent level, women like Grimes face untenable stigmas governing what female artists should be. They're frequently pushed off the technical production aspects of music in favor of men, as she's described in interviews with Fader and the New Yorker as well as on Twitter.

Adele also spoke to these stigmas surrounding women at the boards in her Rolling Stone profile while discussing her collaborations with Sia. Apparently, having two women working together in the studio together made waves.

"I actually love the dynamic of us both being in there and just fucking being bossy," Adele told Rolling Stone. "And it's all these male producers, and they're all fucking shitting themselves 'cause we're in there." One of the songs that came out of that session was Sia's "Alive," which will appear on her upcoming This Is Acting.

The stigmas women face in music industry boardrooms and production studios are not going to dissipate overnight. However, one of the best first steps to opening up the field for women is getting a scope of the problem and the solutions. Adele gave us both in her Rolling Stone profile. By standing up for the art and artists she believes in, no matter their gender, she is making waves — all over a glass of wine.