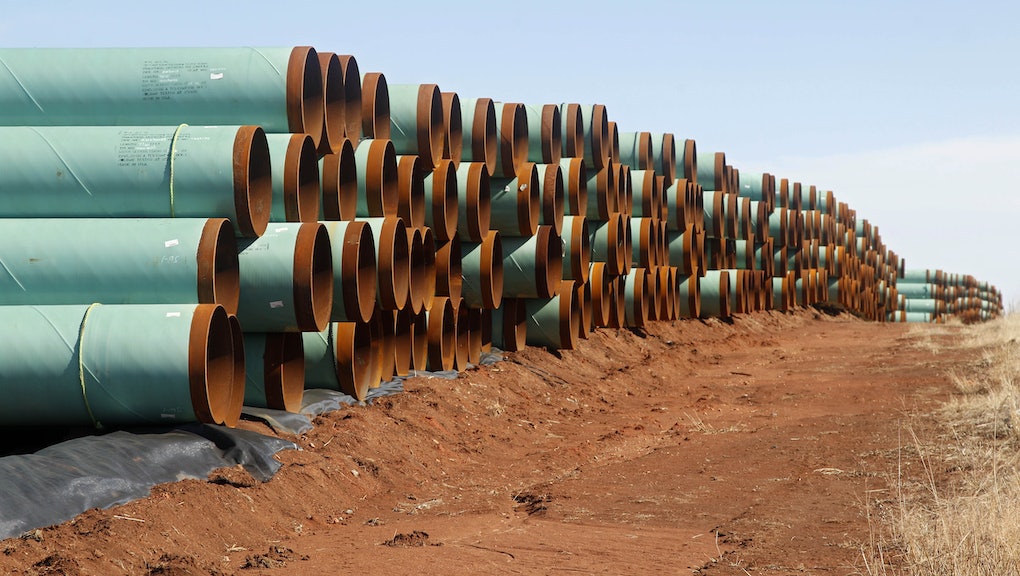 What Is the Keystone XL Pipeline? A Quick Guide to the Oil Pipeline From the US to Canada

On Monday, TransCanada, the Canadian firm that's leading the charge on the proposed Keystone XL oil pipeline, asked the State Department to take its time deliberating the project's federal permit application. The delay could push a final decision on the controversial pipeline beyond President Barack Obama's second term, according to the timeframe laid out in a TransCanada statement.

Right now: In a letter to Secretary of State John Kerry, TransCanada president and CEO Russ Girling asked the State Department to pause the Presidential Permit finalization so that the Nebraska Public Service Commission could approve the best route through that state for the proposed pipeline. The added approval process could take seven to 12 months, according to the statement.

"I note that when the status of the Nebraska pipeline route was challenged last year, the State Department found it appropriate to suspend its review until that dispute was resolved," Girling said the release. "We feel under the current circumstances a similar suspension would be appropriate."

If a delay is granted, it might mean Obama will avoid the pipeline vote entirely, a decision the president has delayed more than once.

For and against: Opinions on the Keystone XL pipeline run strong. Proponents claim the project is a boon for the nation, and could create upwards of 42,000 jobs. Per a State Department impact statement on the proposed project, "Construction spending would support a combined total of approximately 42,100 jobs throughout the United States for the up to two-year construction period." And according a December poll from CNN/ORC, 57% of the 1,011 Americans surveyed support the $8 billion project.

For others, though, the pipeline raises serious environmental concerns. On opponents' list of grievances are surmised threats to endangered species, the potential for increased air pollution and greenhouse gas emissions and the possibility for oil spills.

According to the impact statement, "The proposed Project would emit approximately 0.24 million metric tons of carbon dioxide equivalents (MMTCO2e) per year during the construction period. These emissions would be emitted directly through fuel use in construction vehicles and equipment, as well as land clearing activities including open burning, and indirectly from electricity usage."

As for the possibility of an oil spill, the impact report claims that if approved, the Keystone XL would "include processes, procedures, and systems to prevent, detect and mitigate" a potential oil release.

Tuesday's news could mean that the final decision on the pipeline won't be Obama's to make. And according to a NBC/Wall Street Journal national poll, it could be that the final call falls on either retired neurosurgeon Ben Carson or former Secretary of State Hillary Clinton, the respective Republican and Democratic candidates leading in the 2016 presidential primary polls.

Looking forward: It's possible Carson would vote in favor of the pipeline, as he's voiced his support for the project in the past, according to BizJournal. And considering the Republican candidate's views on global warming, Carson wouldn't likely have many environmental objections.

Clinton expressed her opposition to the project in September.