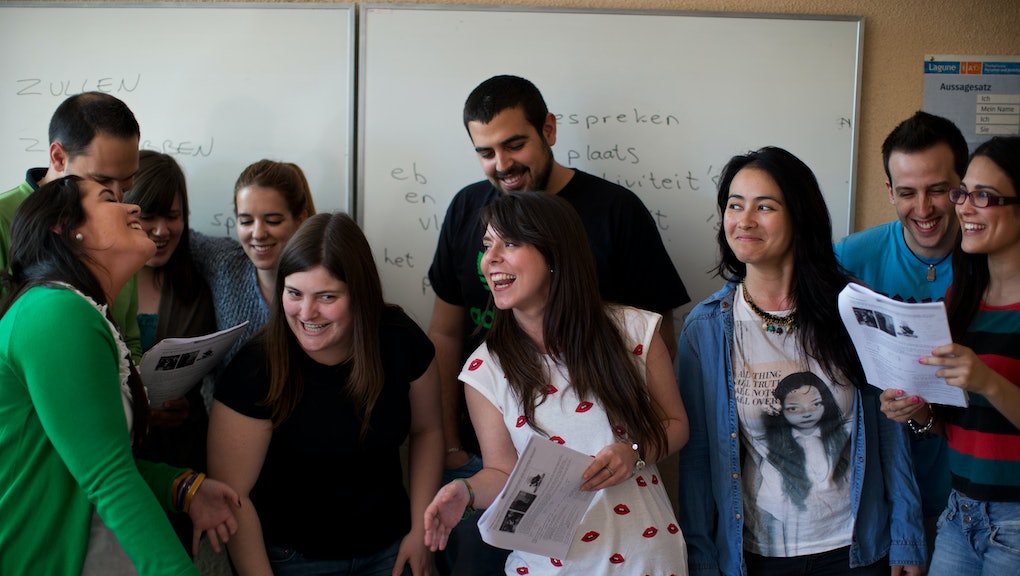 New Study Finds Singing Brings People Together Better Than Anything Else

There is no easy answer to the question of why we sing. It feels good and sounds pretty (hopefully), but how did that come to be the case? The pleasure we feel doesn't serve any obvious evolutionary purpose, like other pleasurable activities, such as eating rich foods or sex. The difficulties of explaining why people sing has previously led some researchers and thinkers to conclude that our enjoyment of music is nothing more than accidental "auditory cheesecake" and therefore unworthy of the time and money we spend consuming it.

However, a new study out of the University of Oxford has shed some light on why singing has meant so much to humans for so long. It seems it's no accident we walk out of karaoke bars arm in arm, or that we feel so uplifted while singing in church. Singing plays a fundamental role in social bonding, researchers found, and it seems it can bring people together more effectively than just about any other activity.

The science: Previous research has already discovered that singing in groups can produce a profound sense of calm and well-being in its practitioners. It can help individuals synch their breathing and heart rhythms and stimulate the production of endorphins, creating a euphoric feeling. However, few studies have addressed whether these effects come singing itself or from the fact that individuals are participating in a common group activity.

The question that the Oxford study attempted to answer was "Is singing special?" as study co-author Jacques Launay phrased it to Mic. "Because obviously any meeting with people can make you feel close to them."

Launay and his colleges contrasted the group cohesion and well-being individuals experienced after a singing class versus craft-making or creative writing classes. What they found, after a seven-month period of observation, was that singing didn't make people feel closer than the other activities. It did, however, get people feeling closer much faster. The researchers termed the findings the "icebreaker effect."

Don't underestimate the disarming name: It's likely this effect once played a much more high-stakes role in human life than it does presently in orientations and office parties.

The implications: The speed at which singing can break the ice likely explains why human beings have evolved to sing and enjoy song as much as they do.

"Such an effect may overcome time constraints on the creation of individual relationships to allow large human groups to coordinate effectively and quickly," the study reads. "The capacity of singing to bond groups of relative strangers in humans may have played a crucial role in allowing modern humans to create and maintain much larger social networks than their evolutionary relatives."

Launay said their results may serve as a possible solution to a conundrum anthropologist Robin Dunbar once posed, called "social brain theory." While studying brain sizes of different primates and comparing them to the size of a species' social group, Dunbar concluded that human beings should only be able to deal with 150 people at a time.

Obviously, human beings can deal with far more. Language is likely part of the reason, but this study seems to suggest that music might be a "precursor to that," Launay said. "In the gap between just having gestures and full blown language, musical activities can help people feel like a big social group without having to communicate fully linguistically with one another."

The quality of singing doesn't seem to matter in creating these connections, either, as the singers studied "didn't come across as especially skilled singers," Launay said, as politely as possible. He believes this points toward possible applications for the study, as bringing together contentious groups in situations where may language fail.

"These kinds of activities could be used to help integrate groups of people," Launay said. "Especially at the moment when people are getting panicked in terms of immigrant groups, singing is the kind of activity that could make individuals feel part of a community and feel connected with the people really quite quickly. That's a really good benefit, as well as just helping anyone who feels lonely and disconnected to feel a little bit more like they're part of a community."

Any one can take part in the social bonding factor music can provide, and it's only one step from there that individuals can begin to enjoy music-making's profound cognitive benefits. These practical applications offer further proof of just how much richer human life is when filled with music.