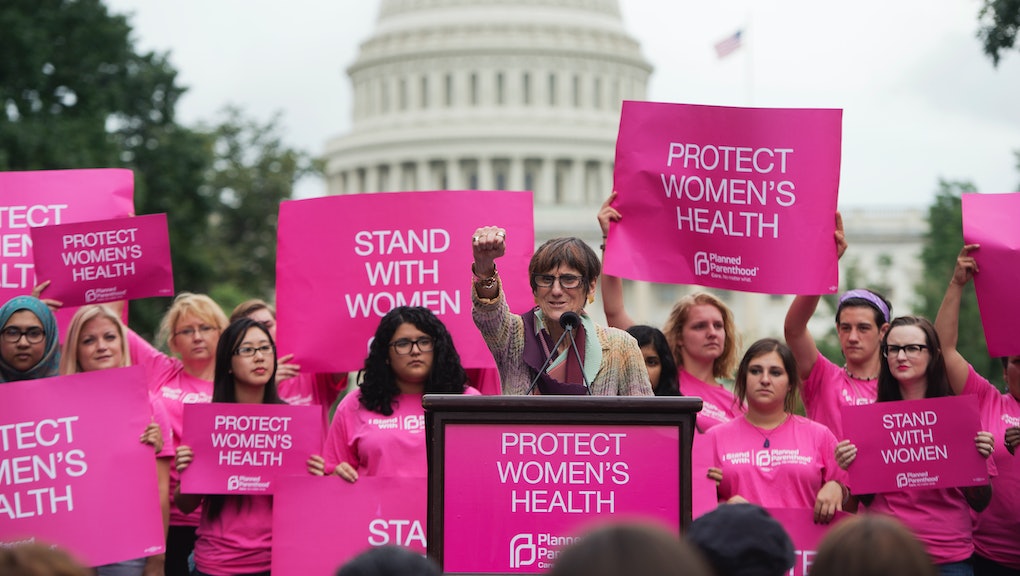 The 9 Biggest Feminist Victories in 2015

It seems 2015 was the year women demanded the world see them for who they truly are. Women rejected double standards that regard their bodies as inherently sexualized or taboo, laws that restrict what they do with their bodies and with whom and damaging media representations that fail to reflect them. Instead, they demanded a realistic representation of their bodies — specifically bodies that need not be thin, white, perfectly managed, proper or deferential to men.

Feminists did this in a variety of ways, in forms widely recognized and inherently personal. But here are just nine of the boldest ways they came together to impart these important messages.

They started a serious conversation about white feminism.

White feminism — the prioritization of cisgender, straight, white women over women whose identities fall outside of this narrow identity — has been around as long as the feminist movement. But this year, feminists seemed to vocally address this problem in mainstream spaces more than ever before. Celebrities like teen star Rowan Blanchard and Emma Watson spoke out about the problematic mentality; viral videos featuring pizza and burgers perfectly broke down the concept; and feminists generally began to admit their complicity in the phenomenon and vowed to do better.

"I don't think we can make white mainstream feminism inclusive because it's not designed to be inclusive," Aph Ko, creator of the comedic webseries Black Feminist Blogger, told Mic in September. "Our exclusion as women of color isn't accidental. Diversity can't help white feminism. [White feminists] just need to move over."

It's easy to write off the countless high school students who revolted against authority figures and fought their schools' ridiculous, sexist dress codes as "cute" or even "overreacting." The truth, however, is that the teen girls behind efforts like #CropTopDay, petitions, protests and other viral, creative efforts are successfully organizing and pushing back on a form of everyday sexism they refuse to tolerate any longer.

"When sexism is normalized by figures of power in institutions of education, girls become numb to the effects it has on their everyday existence," one student, who launched a movement called #FreeTheShoulder at her school, told Mic. "Inequitable dress codes are a perfect example of the patriarchy, subconsciously or not, putting young women 'in their place' time and time again."

The LGBT movement achieved a major victory for which countless individuals have fought tirelessly for years: The Supreme Court legalized same-sex marriage in the United States — and Ireland and Mexico followed in kind. Countries like Colombia and Mexico extended adoption rights to same-sex couples, several LGBT politicians were elected to office in the United States, and President Barack Obama endorsed legislation meant to ban discrimination against the LGBT community.

The transgender community particularly achieved an unprecedented level of public recognition. Caitlyn Jenner's decision to publicly come out and subsequent representation of the community did much to raise awareness, as did the success of media centered on transgender experiences — like the award-winning TV show Transparent and film Tangerine. Transgender individuals also gained visibility via social media-based, artistic and literary activism and were supported by legislators, some of whom pledged to address the issues they face.

Of course, the movement's work is far from done. Homosexuality is still a crime punishable by death in some countries, LGBT youth experience inordinate rates of homelessness and mental illness, and LGBTQ people of color disproportionately face the risk of lifelong poverty, for example. But 2015 was undeniably a banner year for legalizing the freedom to love and be oneself.

In March, Tess Holliday, founder of the hashtag #EffYourBeautyStandards, became the first woman of her weight and height signed to a major modeling agency. The size-22 model turned out to be a harbinger of things to come: In the following months, major brands featured plus-size models in their ads, and models of size have spoken out about their experiences and formed their own collectives.

But now that women who better represent the average American woman's body (a size 14, according to CBS) have broken into mainstream spaces, it may be time to move past the label.

"It's a great step forward that models in the current plus-sized category are now being used by major fashion labels, but it's a step backward to have them constantly referred to as 'plus sized,'" organization #DropThePlus states on its website. "But it's now time for complete acceptance. It's time to drop the label. They're all 'models,' no matter what shape or size."

In 2012, filmmaker Lina Esco launched a movement targeting sexist public nudity laws: #FreeTheNipple. While some have written off the effort, plenty of activists, entrepreneurs and celebrities recognize the importance of questioning the sexist double standard at the heart of the movement.

"Why can you show public beheadings from Saudi Arabia on Facebook, but not a nipple?" Esco wrote in a 2013 blog for Huffington Post. "Why can you sell guns on Instagram, but yet they will suspend your account for posting the most natural part of a woman's body?"

In fact, while the average American child sees more than 200,000 acts of violence and 16,000 murders on TV before they turn 18, according to the American Psychiatric Association, it is completely illegal for women to appear topless in three states, and ambiguous laws in other states effectively prohibit, according to Time.

This inequity has inspired celebrities like Miley Cyrus, Scout Willis, Chelsea Handler, Chrissy Teigen and others to support the movement; activists to protest and lobby for legislative changes; and entrepreneurs to create clever, supportive clothing items, like the "TaTa top." And these activists show no sign of stopping until women's bodies are truly regarded as equal.

It didn't take long for Instagram to remove photos from a series called "period" created and posted in March by poet-artist Rupi Kaur and her sister, Prabh. This hardly dissuaded them, however, and instead proved the very point of their work: It's time to end the stigma that still surrounds menstruation.

The Kaur sisters were hardly the only ones to push back on this enduring shame this year either: Plenty of artists, activists and entrepreneurs did so as well. German street artist Elonë posted menstrual pads featuring messages countering sexism and gender-based violence and 22-year-old Charlie Edge free-bled outside British Parliament to protest their decision to uphold a 5% tax on tampons. The company Thinx launched innovative "period panties" and period care-package company HelloFlo continued to produce adorable videos about the experience. Artists added blood into their work — like giving Disney princesses period blood stains — and even created art out of menstrual blood itself.

"I bleed each month to help make humankind a possibility ... but very few times is it seen that way," Kaur concluded in a response to the photo's removal on Tumblr. That plenty still see menstruation as a "dirty, attention seeking, sick, a burden" but are "comfortable with the pornification of women, the sexualization of women, the violence and degradation of women," she added, is a huge problem — and clearly one feminists must continue to interrogate in years to come.

The $10 bill is getting a feminist makeover.

When 62-year-old Barbara Ortiz Howard launched the nonprofit organization Women on 20s to formally demand a woman appear on the $20 bill in March, she likely didn't expect a wave of overwhelming support or relatively rapid success. In June, Treasury Secretary Jack Lew announced a woman would replace Alexander Hamilton on the $10 bill.

While many were disappointed with the decision — the call to remove Jackson from the $20 bill was deliberately based on his particularly horrifying history of racism — plenty still recognized the importance of featuring a woman on American currency at all.

"Our paper currency is one of the most subtle ways we teach kids to ignore and overlook the absence of women as public figures and people whose contributions to society matter," feminist writer Soraya Chemaly wrote for Huffington Post. "We should have gender parity in our media, and more diverse and diversely accomplished people on our paper currency, before it's entirely obsolete."

Women stood up to online harassment.

The internet is a space that has notoriously bred invective comments and pointed attacks for years, no matter one's identity. But online harassment is an undeniably, disproportionately gendered experience: 25% of young women online have been sexually harassed and 26% have experienced stalking on the internet, according to a recent Pew study. Another study found that 70% of the people who reported severe online harassment between 2000 and 2013 were women.

But 2015 saw countless individuals and organizations refuse to tolerate it any longer. High profile individuals like Ashley Judd, Lindy West and Amanda Hess have spoken out about their personal experiences and others have tried to spread awareness about the failure of social media platforms and police officers alike to adequately address harassment. Organizations have gathered data — like Women, Action, Media's report about Twitter-based harassment — and created interactive platforms, guides and projects to bring attention to the under-addressed but widespread issue.

The bottom line is online harassment is an emotionally and professionally destructive phenomenon that has impacted far too many women for entirely too long — and one hopefully that much closer to coming to an end thanks to the progress made this year.

Women continued to tirelessly fight for their reproductive rights.

Considering that lawmakers across the country have passed a record-breaking 231 abortion restriction laws in the last four years, the many attacks to women's reproductive rights in 2015 were hardly surprising. Yet, activists, lawmakers and organizers across the country continued their tireless fight to ensure women maintain the right to access the care they need.

Despite being the target of a series of false but damaging sting videos — and subsequent investigations, hearings and threats of defunding — Planned Parenthood has repeatedly been cleared of wrongdoing and supported by the millions of individuals they serve in many different capacities every year.

The war waged on women's reproductive rights extended beyond this single organization. Individuals used the power of poetry, hashtag activism and storytelling to share and raise awareness about a variety of reproductive experiences that still remain under-funded, under-discussed and misunderstood.

As none other than scientist Bill Nye said in a recent viral video, "Closing abortion clinics, not giving women access to birth control has not been a way to lead to healthier societies ... When it comes to women's rights with respect to their reproduction, I think you should leave it to women."