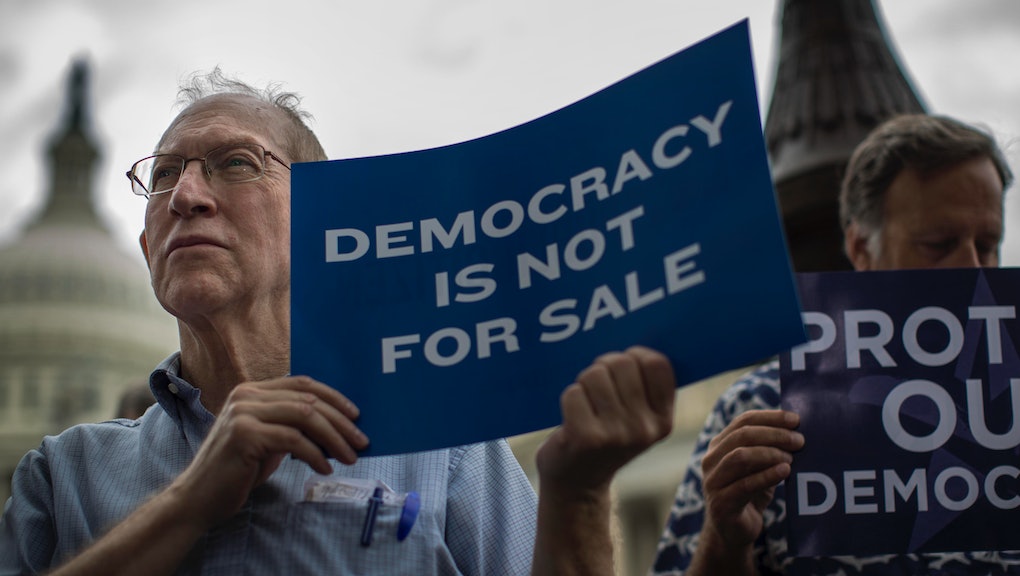 More so than almost any Supreme Court case in recent memory, Citizens United has become a flashpoint.

On the campaign trail, presidential candidates on both sides of the aisle, from Sen. Bernie Sanders (I-Vt.) to Donald Trump, regularly receive standing ovations when they rail against the controversial 2010 decision that paved the way for corporations to give unlimited amounts of money to independent political groups.

"Citizens United is simultaneously the worst thing that happened in terms of money in politics and the best thing that ever happened," Josh Silver, director of Represent.Us, an organization dedicated to fighting corruption, told Mic. "It made things considerably worse, but for the first time ever, it really has made the issue crystal clear in the eyes of more people in this country."

But some of the nation's leading authorities on campaign finance reform believe that focusing on overturning the ruling is not only impractical, it also distracts from a host of more feasible solutions.

"The drama around the Supreme Court is too easy and too ineffective," Harvard law professor and former Democratic presidential candidate Larry Lessig, who made campaign finance reform the central issue of his short-lived candidacy, told Mic in an interview. "It's easy to rally people against this unelected branch of government. But the Supreme Court didn't create this problem, and it couldn't fix this problem."

Instead, experts point to a grassroots movement of organizations that are taking a page out of the playbook of same-sex marriage and marijuana legalization advocates: developing alternative solutions at the state and local level to build widespread support. They argue that this strategy is a more promising and pragmatic alternative, in lieu of action on the federal level.

The background: Calling for Citizens United to be overturned is one thing. Actually doing so is quite another.

Of the more than 11,623 proposals to amend the constitution since 1789, only 27 have actually been adopted, with the last successful amendment occurring over two decades ago. Especially in today's polarized political climate, it would be virtually impossible for the next president to galvanize support for a constitutional amendment.

"We know a constitutional amendment is not going to happen," Richard Painter, a University of Minnesota law professor who served as chief ethics lawyer in the George W. Bush administration, told Mic.

Even if an amendment were politically feasible, experts say the emphasis on overturning Citizens United ignores the much longer and more complex history of campaign finance law. While the case is often characterized as the breach in the dam that unleashed the flood of money in politics, the decision was actually an extension of two older Supreme Court cases dating back to the 1970s.

"I always cringe a little bit when people act as if before Citizens United, American democracy was high-functioning," Nick Penniman, director of lssue One, told Mic. "It's simply not true."

In 1976, the court ruled in Buckley v. Valeo that limits on campaign expenditures were unconstitutional under the First Amendment, effectively equating spending with speech. Two years later, the court's decision in First National Bank of Boston v. Bellotti gave corporations the ability to donate unlimited amounts to groups campaigning for or against referendums and ballot initiatives.

The Citizens United decision expanded these two rulings, holding that the government could not restrict political expenditures of independent entities such as nonprofits, corporations, unions and other advocacy organizations. The result has been an influx of campaign-related cash to ostensibly independent groups.

"[Citizens United] is a very easy target for reformers to shoot at, but reversing that opinion is just going to remove some of the smell," Painter said. "It won't solve the problem."

Short of an amendment, the alternative championed by Democratic candidates is stacking the court with liberal justices who would overturn the decision at some point in the future. Indeed, by the middle of the next president's term, there will be four justices in their 80s. But even in that scenario, the court would have to reverse over three decades of decisions on the issue, not just Citizens United.

Painter sees the Democratic candidates' laser-like focus on overturning this decision as more politically motivated than anything else.

"I don't want to accuse the majority of people who focus on Citizens United as just being motivated in this direction, but there is certainly an advantage to the political left's pursuing the Citizens United focus," he said. "If the answer to the problem is reversing Citizens United, then the only way to do that is to elect a Democratic president, Democratic Senate, and then to change the composition of the court. That gives liberals something else they want: a Supreme Court justice."

Here's what would help: Overturning Citizens United might not be the panacea candidates claim, but activists say there are a host of other solutions that would actually help solve this problem that do not involve the Supreme Court.

"There are a large number of profound legislative changes that could be enacted at the city, state or federal level that would fundamentally transform politics in this country and would hold up even in the Roberts Court," Silver, from Represent.Us, told Mic.

In Minnesota, contributors to candidates for state office receive up to $50 in tax credits from the state, an effort meant to encourage small-dollar donations. This week, voters in Maine will determine the fate of a "Clean Elections" ballot initiative which would allow candidates to run for office using public funds. In Seattle, voters will decide on the "Honest Elections" initiative, which would give each registered voter $100 in "democracy vouchers" to donate to a candidate of their choice.

Supporters hope that Seattle's Honest Elections vote on Nov. 3 could be a tipping point that sparks change on the state and, eventually, federal level.

"That is the most exciting political strategy that we've seen on issue," Silver said. "Imagine a system where there are citizen funds made available to the federal candidates and then they start going to Washington funded with public dollars. That's how we can get a critical mass of supporters for reform in Washington."

Even if support does reach that critical mass, structural forces on the federal level suggest change won't come easy. The last major campaign finance legislation came in 2002, when Congress passed the Bipartisan Campaign Reform Act, known as the McCain-Feingold Act, which banned corporations and individuals from giving large donations to political parties. McCain-Feingold was gutted by Citizens United, and since then, momentum has stalled. In 2012, Congress narrowly defeated the Disclose Act, which would have required independent groups to reveal their donors, with former Republican presidential nominee and current U.S. Sen. John McCain casting the deciding vote against the measure.

Hope for the future: To succeed in enacting change on a smaller level, organizers must first overcome the perception that money in politics is something that can't be solved.

To that end, the spirit of reform has arrived in a place well-known for solving problems: Silicon Valley. Crowdpac, a fast-growing startup with more than 1 million users, was founded in 2014 by Steve Hilton, a former senior adviser to British Prime Minister David Cameron. The company calls itself the first platform dedicated to "crowdfunding for campaigns," and has won the backing of prominent venture capitalists like New Enterprise Associates.

"I think there's been a tendency of people in the tech industry to think of politics as something that is broken that we can fix or reinvent or bypass even and just pretend it isn't there," Hilton told Mic. "If you're actually going to change things, you have to engage with the system that you have."

Organizers must also overcome the perception that money in politics is solely a liberal issue.

"The only way that you're actually going to win is to make it a civic, all-American issue as opposed to a liberal process issue," Penniman, the Issue One director, told Mic. "We need to 'de-lefty-ize' this issue so that people understand it is a core American issue that goes all the way back to the founders."

On that point, the polling bears Penniman and other liberals out. A majority of Americans from both parties favor a major overhaul of the campaign finance system, with 85% saying it needs "fundamental changes" or should be "completely rebuilt."

The popularity of Sanders and Trump may be a reflection of the changing climate.

"Donald Trump has been a blessing to the cause in many ways because he's been so blunt about what political money has bought him in the past," Penniman said. "He's almost gross about it, which is fantastic."

Activists say for the first time in recent memory, momentum exists to address the problem.

"Even with Citizens United, I'm feeling really optimistic because the current system is unsustainable," Adam Smith, communications director for Every Voice, told Mic. "You're seeing more anger and more public frustration than you've ever seen."

"We have won the argument overwhelmingly that money influences politics," he said. "What we have to do now is convince voters that we can reduce those barriers and come together to pass common sense reform."