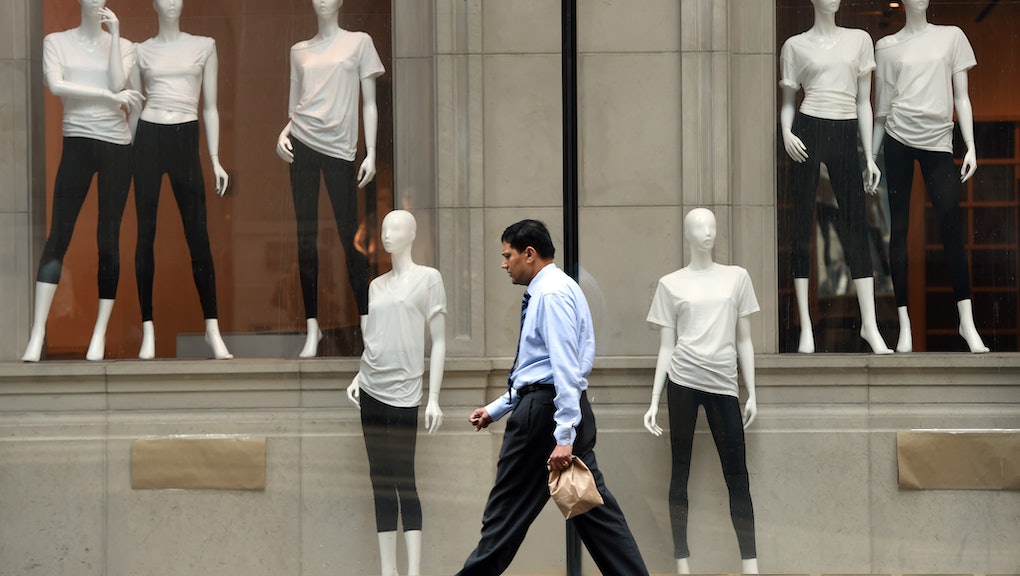 There's a Reason Your Mannequin Is So Much Skinnier Than You

Think about the last time you walked into a store and were met by a silent, faceless figure. Maybe the mannequin was standing tall, its arms jutting out at the hips in the sort of cliched pose seen on runways. Maybe it was sitting, its fake legs crossed, appearing as though paused mid-conversation with other mannequins nearby.

Whatever the setup, there is one thing likely to be true: The mannequin staring back at you had a body unlike yours.

You wouldn't be alone in noticing that fact — nor would you be the first to get pissed about it.

Oasis, a clothing chain based in the U.K., was the latest retailer to come under fire from shoppers who took issue with its ultra-thin mannequins. In October, writer Rhiannon Cosslett photographed an Oasis mannequin and tweeted it out, calling it "disgusting, damaging and irresponsible."

In July, Topshop faced similar backlash after a shopper posted a Facebook photo asking "how [Topshop] can justify the ridiculously tiny mannequin." The post noted that none of the mannequins displayed clothing over a size 6 and raised concerns about the possible negative impact on girls' self-esteem. A representative from Topshop eventually responded that they wouldn't be ordering any more of those mannequins.

Topshop shouldn't have been caught off-guard: Another one of their mannequins went viral in October 2014 for essentially the same reason.

All the anger over this reality begs the question: Why are mannequins so damn skinny in the first place?

Mannequins made to reflect an idealized body: The debate over mannequins, amplified by the power of social media, reflects an increasingly obvious disconnect between the fashion world and the consumer. It's the kind of disconnect we see in the lack of plus-size clothing on store shelves or the slender models posing on billboards.

For their part, retailers maintain that the models aren't supposed to be true reflections of female bodies. "The mannequin in question... is taller than the average girl and the form is a stylised one to have more impact in store and create a visual focus," Topshop said in a statement after the 2014 incident, according to the Guardian:

"Mannequins are made from solid fibreglass, so in order for clothing to fit, the form of the mannequins needs to be of certain dimensions to allow clothing to be put on and removed; this is therefore not meant to be a representation of the average female body."

Despite how angry shoppers armed with iPhone cameras may feel, from the very beginning, mannequins weren't designed to look like us, but rather an idealized form of us — and often with some creative license to take that ideal beyond any realm of reality.

Mannequins only came into regular use with commercial retail; before that, it was just seamstresses and their dress forms. The first mannequin arrived in 1870, reported Smithsonian magazine, along with innovations in sewing machines, plate glass windows and electricity, not to mention the modern department store. Early mannequins were realistic in the sense that they were made to resemble humans: "false teeth, glass eyes and real hair," as Smithsonian described them.

That level of realism has cycled in and out of fashion for years, ChadMichael Morrisette, head of visual design firm CM Squared Designs, told Mic. Even with real faces and hair, the idealized body shape remained.

In the 1950s, mannequins shifted toward a Barbie-like "realism," with full faces of painted makeup and cinched-in waists that reflected the corseted dress styles of the time, Morrisette said. Sculptors sometimes created mannequins using live models, but the finished product was always smaller and daintier, reflecting the feminine ideal at the time.

The same went in the 1970s, when companies like Rootstein churned out mannequins based on runway models, meaning a 5-foot-11 frame and size 0 or 2 waist, Morrisette said.

A focus on artistry, not realism: Those proportions held steady but mannequins became even more abstract. The more "modern" figures seen in stores today — oversized, faceless heads, no hair and no facial expressions to speak of — are reminiscent of those from the 1920s and 1930s reflecting the Art Deco aesthetic of the time, Morrisette said.

As the art and fashion worlds blended in the late 1970s and 1980s, such mannequins came back in fashion, this time even more stylized. Arguably the most influential figure in mannequin history is Ralph Pucci, who helped revolutionize the industry with his artistic, sculptural figures.

Pucci's first designs, which were recently shown in a retrospective at the Museum of Arts and Design in New York, were striking at a time when most mannequins were stiff and painted to resemble real people, Barbara Paris Gifford, the retrospective's curator, told Mic.

Pucci broke away from tradition by working with sculptors like Michael Evert and introducing movement and athleticism, even posing the mannequins in handstands. Others were more abstract, including a popular design called "Swirly," a one-eyed smiling figure created in partnership with artist Kenny Scharf.

"They were really about defining the attitude of an area within a department store versus being these exact replicas of human beings," Gifford said. "It was really revolutionary to retail, because it was a very different way of looking at what was a mannequin, in terms of communicating a feeling or a kind of style."

By the time the '90s rolled around, the industry had fully shifted away from anything that resembled a living human. Gone was the skin tone, facial expression and distinct facial features. Instead, Simon Doonan, the former creative director of Barneys, advanced the abstract aesthetic in his famously fanciful window displays, in which he introduced the faceless styles and "egghead" designs. Other retailers, Morrisette said, followed suit.

"Everyone copied him because he was the leader in the industry," Morrisette said. "If someone were to set a new trend, everyone would copy it."

The fashion industry peddles a fantasy: Pucci's creative license also moved him to experiment with the shapes and sizes of bodies. With artist Ruben Toledo, Pucci designed Birdie, a size 16 mannequin with a 44-inch waist. Other series featured more variety in ethnicities and ages, though they never fully made it out of special displays. "People just didn't respond to it," Gifford said.

Other manufacturers have released mannequins in larger sizes as far back as the early 1970s, Morrisette said. The first collection, Pretty & Plump, came in 1974. A 1977 Washington Post article quotes Adel Rootstein, the manufacturer's founder, as saying, "There are fat people in this world, and they ought to wear clothes for fat people, shown on fat models and mannequins, not those stuffed with pillow."

"There are fat people in this world, and they ought to wear clothes for fat people, shown on fat models and mannequins, not those stuffed with pillow."

Yet, those kinds of designs remained more like one-off collections. Retail experts say that shoppers at high-end retailers would complain about the plump figures, insulted that the store thought its shoppers were fat, Gifford said.

"They concluded that fashion is really about fantasy," she said. "It's really about what we want to think of ourselves. The more realistic the mannequin would get, the more you broke that wall, and it ended up not being a successful gesture."

When public opinion demands reality: Industry insiders are often taken aback at the public backlash against mannequins that, they say, are clearly hyper-stylized.

"It's like looking at a Salvador Dali," Morrisette said. "You can't get offended when you make it look like he's wanting to melt into the floor, because it's not real."

While fashion maintains an element of fantasy, the growing sentiment among "real" women, aka shoppers outside the fashion industry elite, is that fashion should be less fantasy, more reality.

Critics of too-thin mannequins often point to the negative impact on body image, particularly for women who already face a mountain of cultural pressure to be very thin. (While male mannequins are also highly idealized, they don't face the same cultural expectation to be slender as women do.)

Accordingly, some retailers have introduced more diverse mannequins — shorter, stouter and more full-figured. It all comes down to what kind of shoppers a store is catering to, Dan Evans, president and creative director of mannequin manufacturer Goldsmith, told Mic.

Goldsmith, which has been making mannequins since 1927, has recently been creating custom designs for mass retailers like Macy's, where the standard size might now be a 4 or 6 instead of the historically used 0 or 2. Department stores in particular have shifted away from the standard one-size-fits all mannequin during the last eight to 10 years, he said.

"There's always a concern about ... about what you're showing in terms of size and weight," he said. J.C. Penney, for example, introduced plus-size mannequins in 2014. Evans also pointed to a successful display designed with Latino shoppers in mind at Macy's. The mannequins has a shorter height, fuller bust and thicker thighs to better help shoppers see themselves in the clothes, he said.

The message? You can wear these clothes.

"It was a big success because it had that much identity at that point because it really fit this particular market they were driving to," Evans said.

Mannequins will change with our beauty standards: Why aren't the rest of mannequins today more realistic reflections of real bodies? It's a noble goal, but the mannequin manufacturers and merchandisers who style them have other considerations to keep in mind.

"We've found that they feel that taking $6 T-shirts and putting it on a $1,000 mannequin can really add value and really elevate the whole fashion direction," Evans said. A thrifty buy looks that much more expensive when hanging off a glossy, tall and slender mannequin.

Though, it's not just about the desire to make cheap shirts look more expensive. The outspoken desire for body-positive models today only underscores the fact that the body standard still governing our culture defines a skinny body as the truly beautiful one. The hyper-stylized mannequins fall somewhere between the fantastical and the aspirational.

Things can change, though, as evidenced by Topshop's reaction to customer outcries earlier this summer when it said it would cease ordering the offending mannequins.

"Until our culture as a whole starts saying there's all kind of beauty, these companies have no incentive to create anything different," Morrisette said.