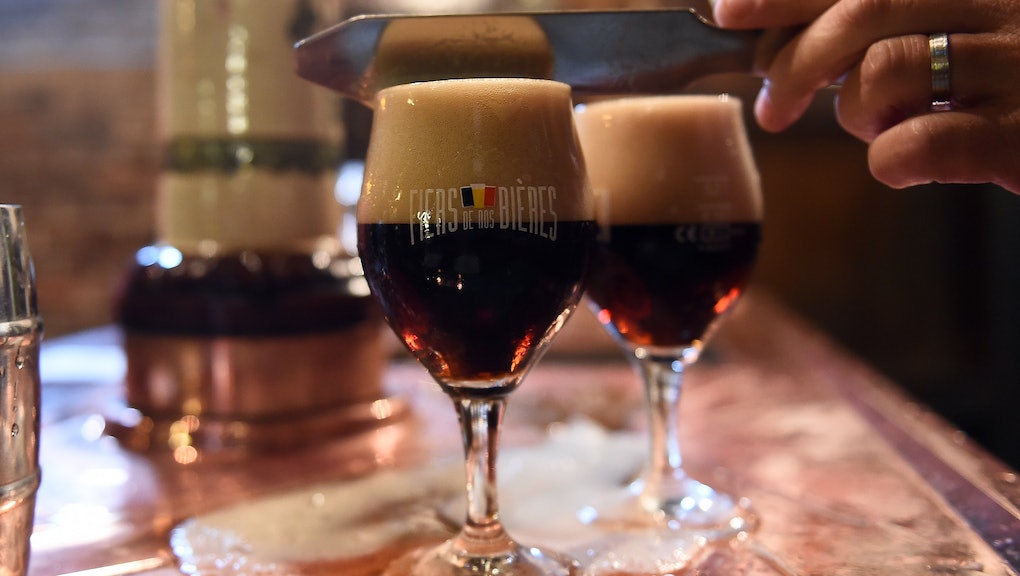 Climate Change Could Kill Off Your Favorite Belgian Beer

Bottoms up, and fast.

Just when we thought climate change couldn't get any more terrifying, it appears that the Belgian beer industry might be its next casualty.

Sophie Matkava, secretary of the family-run Cantillon craft brewery in Brussels, told Mic that two generations ago, the company was brewing from October through May; today, the brewing season only stretches from November through March. "The nights, for the moment, are too high in temperature, so we have had to cancel three brews already," Matkava said.

Traditionally-brewed lambic beer requires cooling in the open air for spontaneous fermentation. This is the original fermentation process, predominantly used throughout history, from beer's inception, around 10,000 B.C.E. in Mesopotamia (the ancient region that roughly corresponds to present-day Iraq, Kuwait and Syria), to the mid-19th century, when brewers discovered yeast could aid fermentation.

Spontaneous fermentation involves leaving wort, a mixture of hot water and grain, to cool outdoors, which attracts "wild yeasts to metabolize the sugars," the Ecological Society of America explains.

"Ideally [the wort] must cool at between minus 3 Celsius and 8 Celsius [18 to 27 degrees Fahrenheit]," Jean Van Roy, the Cantillon brewer, told Agence France-Presse. Lately, though, the nighttime temperature has been 10 to 15 degrees Celsius (50 to 59 degrees Fahrenheit).

"Climate change has been notable in the last 20 years," Van Roy told AFP. "My grandfather 50 years ago brewed from mid-October until May — but I've never done that in my life, and I am in my 15th season."

Cantillon was established by Van Roy's great-grandfather in 1900, and produces roughly 400,000 bottles annually, including the popular lambics Gueuze and Kriek.

"If we continue on that rhythm, it can be that within 20 years, [production season] will be [shorter] and probably that the period will be limited to December to February or something like that," Matkava said. "So, yes, of course, if nothing is done — and it's probably already too late — but if we do not try to do our best, well, it will probably be a bigger problem for the production in the long term."

Stop going against the grain and hops to it. The influence of vocal climate change deniers, often fossil fuel industry lobbyists, has stymied effective legislation on carbon emissions in the United States, which could cause irreparable damage.

President Barack Obama has tried to mitigate the damage with his Clean Power Plan "The science tells us we have to do more," he warned at the Aug. 3 announcement of the plan.

"Documents released in February 2015 reveal the extent to which ExxonMobil and other powerful fossil fuel interests secretly funded a purportedly independent contrarian climate scientist for more than a decade," the Climate Deception Dossiers, published by the nonprofit Union of Concerned Scientists on July 8, wrote.

Anti-climate change lobbying in the U.S. invariably has implications for the rest of the world, given America emits more carbon dioxide per capita than any other major economy.

"Indeed, the oil and gas industry's stranglehold on Congress is so firm that even when the Democrats controlled both houses, repeal of the [oil] subsidies didn't stand a chance," reported the Huffington Post in 2011.

Bad news, beers. It's likely climate change will threaten a wide range of alcoholic beverages, according to Cantillon, raising the issue of how humanity will cope with the concomitant lack of food security and extreme weather patterns in the absence of palatable booze.

"[Van Roy] knows a lot of wine-makers, and it seems that, for a few years, the season for the picking of the grapes [is] now months earlier than it was 15 or 20 years ago, so also there we see a change with the warming up of the temperatures," Matkava said.

First beer. Now wine. We might as well throw in the bar towel now.