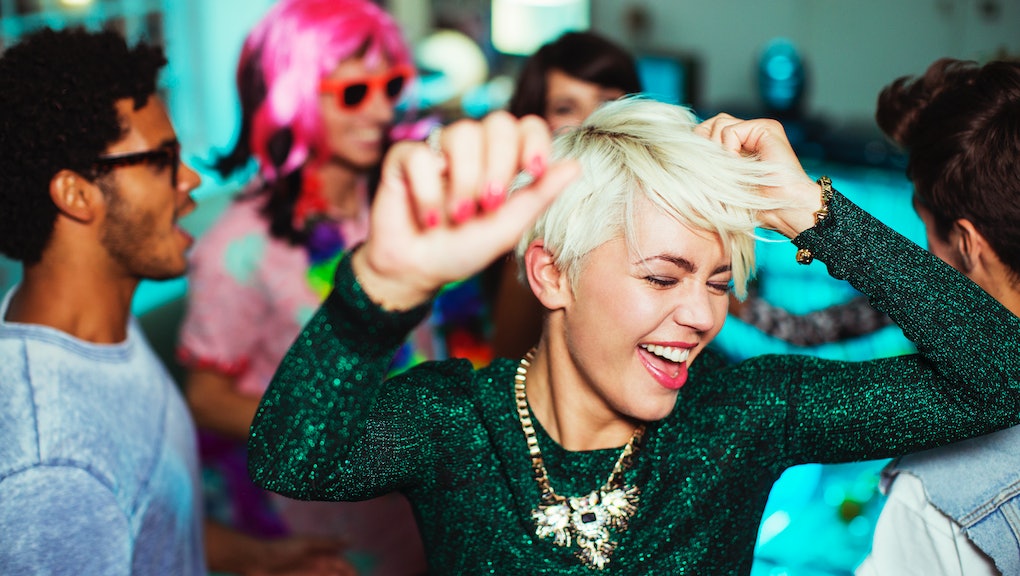 "I can't dance" is an excuse heard far too often on dance floors across the country. More often than not, it's a copout based on nervousness and anxiety. Surprisingly, few people are unable to move their bodies to a beat; most of the time, it happens involuntarily. It's fairer to say, "I won't dance."

However, while individuals may save themselves from a few glimmers of embarrassment by hugging the wall, they may also be cheating themselves of a wide range of social and health benefits, according to a new study out of the University of Oxford.

A team of researchers, led by postdoctoral researcher Bronwyn Tarr, discovered that dancing in synchronicity with others can have surprising impacts on health, wellness and how close we feel with those around us. Even the most pitiful hand dancing or two-step performed beside another person can provide bursts of endorphins, hormones that provide us with feelings of well-being and pain relief, and help us feel more emotionally connected with others around us. Their findings offer insight into why human beings evolved to dance in the first place.

This question of why we dance formed a research foundation for Tarr, a dancer herself. Nearly every culture engages in some sort of dance or movement-based behavior, Tarr told Mic.

"It tends to be in groups, with and for other people," Tarr said. "That social aspect intrigued me, and it's one of the main hypotheses regarding music and the evolution of our immense aptitude and appreciation for it."

Previous studies have uncovered aspects of this social utility of music in helping our ancestors form effective social groups. Related to dance, previous studies have revealed that synchronized and highly physical movements, such as rowing, can help raise endorphin levels and bring people together. This, according to researchers, is why dancing makes us feel so good.

"All of those studies had been done using movements that you would not actually see on the dance floor," Tarr said. "Plus, most previous studies focused on synchrony only between two people, and had not included direct or indirect measures of neurohormones that might underpin the bonding. ... We decided to test that with full body movements and music, something that looked more like actual dance."

Tarr split a group of 264 Brazilian school children into four groups, two which learned and performed full body dance moves, the two which performed a series of hand motions. The groups then performed them either in synchrony or unsynchronized.

Surprisingly, even the low-exertion groups showed higher pain thresholds and reported feeling closer to their dance partners when they performed their movements in sync. However, students in the high-exertion, synchronized dancing group had a far higher pain tolerance, a sign that their bodies were filled with even more endorphins. Other studies have discovered these high endorphin levels can help lower stress, thereby improving health and playing a role in helping us to create strong social bonds.

In the face of all these benefits, it's a wonder why more people insist they can't and won't dance. It's such a deeply ingrained portion of our psyche, even babies do it.

"They pick up the beat and get a lot of pleasure out of moving along to it," Tarr said. "When we grow up, we seem to start limiting our expression of that inherent musical ability, which is probably due to our cultural context. People don't often think of themselves as 'musical' or 'a dancer' unless they do it as their job. I think adults need to look for opportunities to unlock that creativity that was originally there."

The study still leaves questions unanswered. For one, how many of these feel-good effects carry over when individuals aren't synchronizing all their movements? How much room is there for improvisation? Tarr sees the study as merely laying the groundwork to help answer these questions, while at the same time asking other questions of ourselves.

"I think it helps us ask ourselves 'so ... why don't I dance then?'" Tarr said. "More practically though, I hope that findings like ours will be of use for music and dance therapies. They could benefit from the knowledge that certain aspects of group movement experiences can lead to positive effects like coping with pain and fostering interpersonal trust. I'm really interested in its relevance for autism therapy, where synchronized dancing could help children form connections with others."

That research is still forthcoming. Yet, the present study suggests that dance could be therapeutic for anyone bold enough to attempt a two-step. To quote Walk the Moon, the best advice might be to just "shut up and dance."