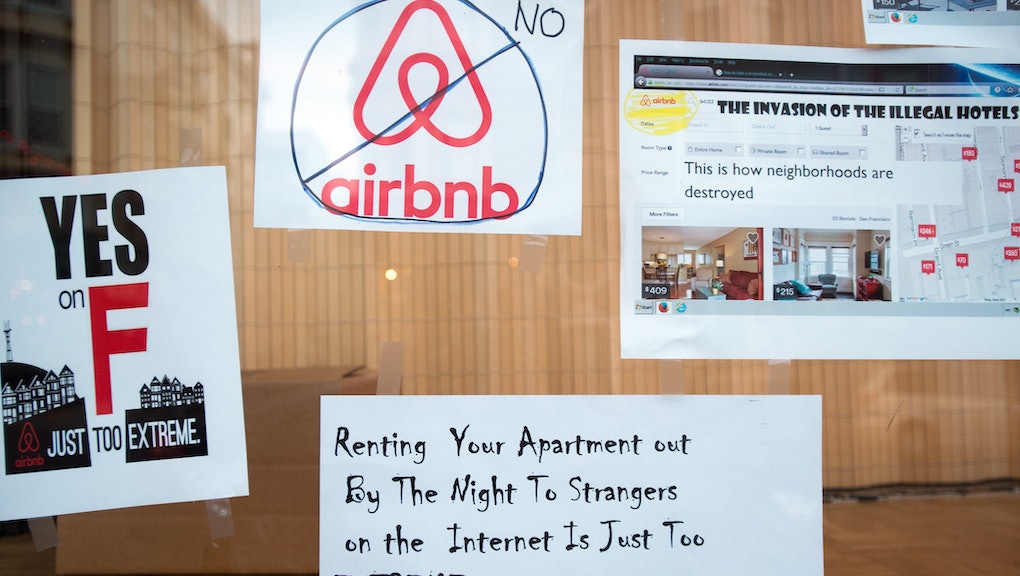 Rent-sharing network Airbnb dodged a bullet on Tuesday when Proposition F, a San Francisco legislation also known as the so-called "Airbnb initiative" that would have limited short-term rental sites, was shot down by voters on Election Day. Airbnb spent several million dollars in a months-long battle against the measure, Fusion reports. However, efforts to reform the company are far from over.

While the measure was defeated in a 55% to 45% vote, Airbnb may have to gear up for similar attacks in other cities it operates in, Re/code reports. "If you have a lot more money than your opponents you can wield a big political axe," Steven Hill, an author and senior fellow at the New America Foundation, a nonpartisan public policy think tank, told Fusion. "But if Airbnb thinks that it's over, it isn't."

Why the fight isn't over: For one, the money Airbnb spent on Prop F is incentive for other activist groups to go after it. Share Better co-founder Dale Carlson, whose company backed Prop F, told Re/code he's talked to groups in other cities and they share similar concerns. "They're wrestling with the same phenomenon," Carlson told Re/code. "It is conceivable there could be a number of ballot initiatives in a number of cities around the U.S. next year. Instead of Airbnb spending $12 million, it could be $100 million."

Prop F would have placed a 75-day annual limit on all short-term rentals, a drop from the city's current 90-day limit. The proposition's supporters, mostly hotels and hotel unions, say Airbnb and its competitors are threatening affordable housing and increasing economic inequality, Fusion reports.

Some regulation necessary: Though the company wouldn't get behind Prop F, Airbnb spokesman Christopher Nulty told Fusion that regulation is necessary. Nulty used Philadelphia's recent legislation as an example, in which short-term rentals are taxed, limited to 180 days per year and demand a special rental license for any rentals over 30 days.

"Our CEO, Brian Chesky, has said before that to be regulated is to be recognized," Nulty told Fusion. "Regulation is a good thing."

New York City started cracking down on Airbnb last summer on the basis that a majority of the site's short-term rental listings are technically illegal in the city, PBS reports. City laws prohibit any home rental under 30 days unless the owners are present, according to PBS.